Someone on Twitter just asked me why I don’t like Sadiq Khan. Actually, I don’t have any problems with him. In fact, I will be in his city very soon and I plan on enjoying myself thoroughly. He has made some questionable decisions in the past in terms of who he decided to share a stage with, but I don’t think he’s an extremist himself. I also tend to believe some of the “Londonistan” stuff is kinda overblown, although you have to be realistic when you look at the future composition of the United Kingdom, Europe, and even the United States.

If you bring in large numbers of immigrants who have a different culture and who also reproduce at higher rates than the native population, then you’re going to eventually have a different kind of country. It’s just basic math. Plus, history has shown that those types of schemes often lead to ruination and bloodshed. Some caution might be in order, that’s all I’m saying.

What prompted me to write this post has nothing to do with any of that, however. Instead, I’ve been bristling at Khan’s recent comments on Donald Trump and our electoral process. I imagine my reaction is similar to the ones Britons had when President Obama recent went over there and lobbied for them to remain in the European Union (EU).

From The Wall Street Journal…

President Barack Obama bluntly urged Britain to remain a member of the European Union on Friday, warning that the country’s prospects for forging a trade agreement with the U.S. would suffer if it left the bloc. With a June referendum on the issue looming, the U.S. president and British Prime Minister David Cameron presented a united front, arguing that Britain’s influence is magnified, not diminished, by its role in the EU.

Mr. Obama rejected suggestions that he was meddling in British politics. As a friend of the U.K., he said, he wanted to offer his opinion and explain why remaining in the EU would benefit both Britain and the U.S…

Jacob Rees-Mogg, a Conservative lawmaker who supports the so-called Brexit, said Mr. Obama should have stayed out of the debate.

“It’s stunningly hypocritical, unless America wishes to be ruled by Mexico,” said Mr. Rees-Mogg, who thinks Brussels has too much authority over laws and regulations affecting Britain. “It’s so against the diplomatic norm to intervene in a live political debate.”…

Boris Johnson, in an article published Friday in the Sun newspaper, suggested that the “part-Kenyan” Mr. Obama may have an “ancestral dislike” of the British Empire. The East African nation was a British colony from 1920 until it gained independence in 1962.

Speaking after the news conference, Mr. Johnson said the U.S. shouldn’t tell Britain what to do.

I thought that was a mistake for the side that wants the UK to stay in the EU. In fact, I can’t think of something I would care to hear less if I was a British voter. The arrogance of Obama here is staggering. But I imagine he was asked by Prime Minister David Cameron to give his thoughts, or that he at least consulted with him beforehand. I’m still shaking my head at the two of them thinking this was a good idea.

Mr. Khan seems to be following in their footsteps as of late when it comes to Donald Trump presidential candidacy. I can understand him giving his thoughts on Trump and his politics when asked about it…once. But there’s been three straight days of headlines here in the United States about what Khan thinks about Trump.

NEWSFLASH: I don’t give a fuck what Khan thinks about US politics. I barely give a shit about what our own politicians think and so I certainly don’t care about what the Mayor of London has to say. Not only that, his position is neutered when compared with mayors in the US. Khan doesn’t have all that much power, in reality. But you wouldn’t know that by the way the media is treating his proclamations as of late. 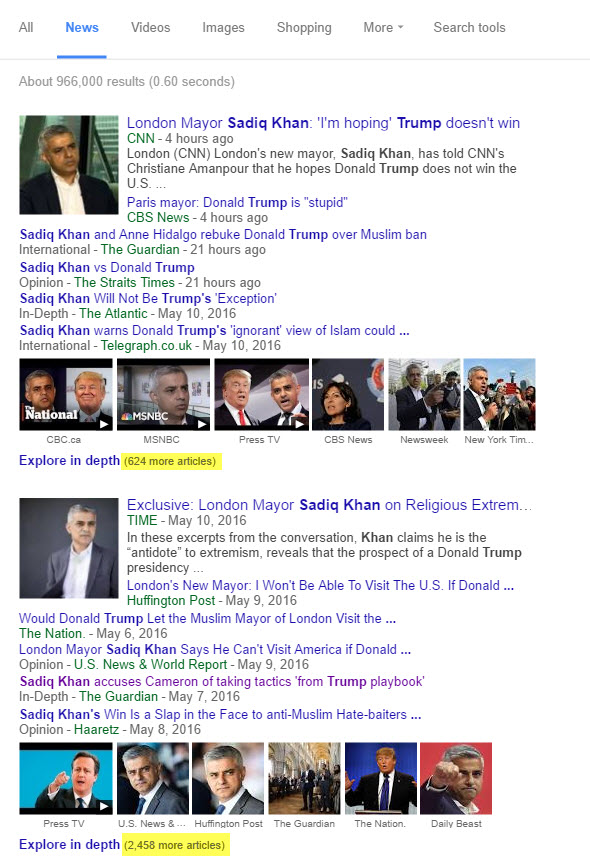 Now, he’s claiming he’s going to help Hillary Clinton with her election efforts! Who does this guy think he is? I have to laugh at the presumptuousness. I don’t think Hillary wants your help all that much, dude. Maybe I’m wrong, though. Her political skills are lacking sometimes so she might be tone deaf on this one as well.

Khan, the first Muslim leader of any major Western capital, said Clinton should use his mayoral campaign as a “template” because he had seen off a “Donald Trump approach” to elections in the U.K.

The London mayor, who insisted he was not a “Muslim leader or Muslim spokesperson,” said Trump’s proposed ban on anyone of Islamic faith entering the U.S. affected his own family because it would stop his teenage daughters visiting Disneyland.

In contrast, he said he would “love” to see a Clinton victory because he could not imagine a better role model for his 14-year-old and 16-year-old daughters.

OK, Sadiq. We get it. You don’t like Trump. Can you stick to the London mayoralty now, please? You know, the job you were actually elected to do?