There’s Only One Number That Matters Coming Out of Iowa: The Delegate Count

The main thing you should be focusing on coming out of Iowa is the delegate count.
Total
0
Shares
Share 0
Tweet 0
Pin it 0

I’ll be the first to admit that I got caught up in the moment with the Iowa caucuses. Even though all the public polling showed Donald Trump winning pretty handily, I should have known better. It was always going to be tough for him to win in a state like that. The evangelical wing of the party is huge in Iowa, and the state itself is in the middle of nowhere. Trump didn’t invest much money there, either. His people told him it was always going to be a long-shot, and they were probably right. Still, maybe some investment in key areas like voter outreach and polling might have helped. That’s all hindsight, though.

As I’ve been saying, Iowa isn’t the place a New York business tycoon is supposed to come in and win. In fact, him coming in second is actually a pretty big deal. I know it’s not what Trump backers wanted, but still. This isn’t something to lose your mind over, either. People place too much importance on Iowa every single election cycle, and it rarely pans out. The last two winners of Iowa on the Republican side were Rick Santorum and Mike Huckabee, for instance.

Trump himself has come out swinging this morning, which is what we all of course expected:

That last point is pretty interesting, because Trump actually hasn’t been given much credit at all for self-funding. When I first read it, I thought to myself that it was a mistake to tweet something like that out. Then, I reexamined it. All he’s saying is that it’s not worth it because he gets no points from it (i.e. might as well take more donations, Super PAC money, etc.). The media also completely ignores it. To be honest, he’s 100% right. I always thought it was a mistake to be as anti-donor and anti-outside money as he’s been, but Trump seemed to think it was too important of a talking point to give up. Plus, I think he just doesn’t like being beholden to the check-writers. It’s pretty admirable.

In the grand scheme of things, this Iowa result means almost nothing. The ones who hype it up year after year are the members of the media themselves. Iowa is not some special place, it’s a state just like any other. Some would argue it’s in the lower-tier, even. It definitely wouldn’t be my first pick if someone were asking me which state I wanted to live in (to be fair, it also wouldn’t be my last). But take the love or hate for Iowa out of it for a minute. There’s only one result that really matters from last night, and that’s the delegate count: 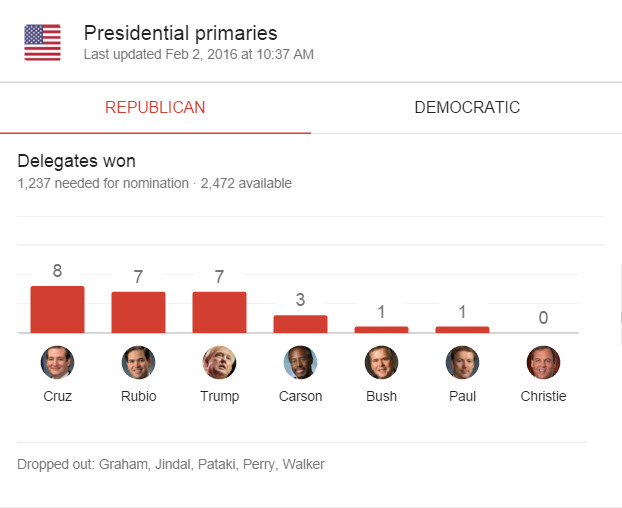 This is going to be a lengthy election, and in my opinion nothing will be even close to settled before Super Tuesday. Buckle up for the long ride, cause we’re just getting started.