“We Demand the Killing of the Atheists” Trends on Arabic Twitter

I’ve spent the last few minutes culling tweets from a disturbing trending topic from Arabic Twitter. I’ll let someone who actually speaks the language break it down for you first…

Trending on Arabic #Twitter is this hashtag #نطالب_بقتل_الملحدين which translates to "We demand the killing of the Atheists". scary times.

I’ve culled some of these, but of course they’re in Arabic. Also, the built-in Twitter translator (from Bing) sucks. But you can still get the idea. 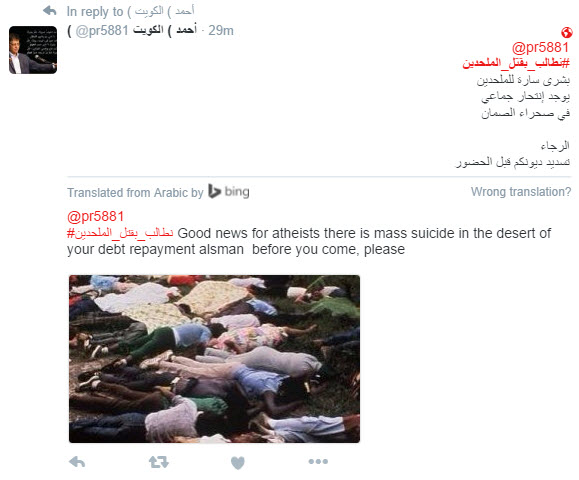 I made a joke there, but to be fair, there were some Muslims in the tag calling it out and saying this was wrong. Still, I won’t hold my breath waiting on any of these so-called progressives to talk about this hashtag of hate anytime soon. These guys were just seeking to culturally enrich us, after all.