People often ask me, “Ralph, why are you such a hardcore badass?” OOOOK, that’s not exactly correct. They usually say, “Ralph, why are you such an asshole? Chill out with your speech a little bit, and be more moderate.” These people are afflicted with a fundamental misunderstanding of the landscape. The SJWs (specifically the ones in the gaming press) created me. I’m a reaction to their extreme rhetoric and ostracization.

But even though I consider myself a hardliner, I’m perfectly willing to sit down with any of these fuckers, as I’ve proven. Leigh, Zoe, Anita, McIntosh, Wu, Chu, Blue…I’ll talk to anyone. That’s how it’s supposed to be done, but unfortunately, 99% of these fuckers refuse to debate the issues in an open and fair way.  Instead, they sit on the sidelines and spout hypocritical pablum.

If they even once lived up to their supposed ideals, you might be able to take them seriously. But they never do. Take The Assman David Gallant, for example. I would show you why I call him that (most of you already know lol), but it’s against some ad rules I have to follow. If you really want to know, just go to Twitter and search his handle, then scroll through the photos. I’m not sure why he ever thought it was a good idea to showoff those decrepit cheeks. Perhaps he was under the influence of narcotics.

Anyway, we’ve established that he’s a disgusting piece of shit. He’s not content with that, however. Now he want’s to really go for the gold by promoting violence against GamerGate supporters who attend the Game Developer’s Conference (GDC) this week. You can say a lot of things about me, but I have never once took it to that level. Even though the media constantly accuses us of such tactics, the evidence doesn’t show that. In fact, it shows the opposite. The SJWs are the ones creating a climate of violence. 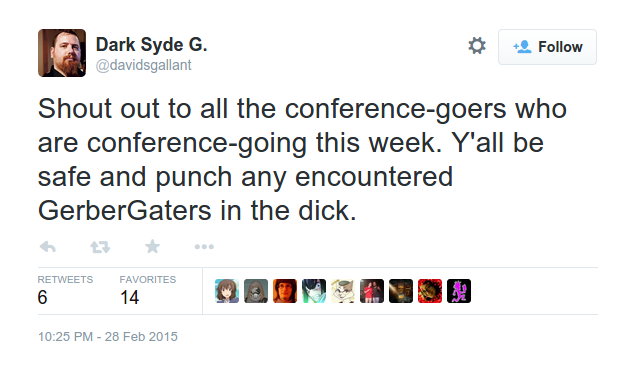 I’m sure this nasty fucker will claim that this is a pathetic attempt at comedy (Chu already is). I don’t think it was a joke, really, but let’s play along for a minute. Imagine if I had said something similar about the other side. Do you think for one single fucking second that they would ever let that go? Ghazi would have a thread up in seconds. Big Randi would be on the phone with her contacts at Twitter, urging on my suspension. Detractors of mine within GamerGate would have a field day. In short, I would not receive the benefit of the doubt. Gallant shouldn’t either. Violent rhetoric should be off limits, period. The SJWs say that’s what they’re about, but their actions tell a different story.