Derek Smart Gets Ready to Drop the Hammer on Big Randi, As Deceitful Wu Inserts Self Into Drama

I don’t know about you all, but it’s refreshing to see Randi Harper go up against someone who truly has the means to hold her to account a little bit. Last week, she picked on noted neutral Derek Smart. He’s been monitoring the GamerGate cause for awhile now, and has been reasonable to all that approach him. But I guess he rubbed fatso the wrong way a couple times, so in retaliation, she decided to spread a vile rumor about him hitting on her. She even intimated that he was trying to marry a mega-meth hound like herself. The sad thing is, most people don’t have the means to fight a blubberous bully like Big Randi. Thankfully, Mr. Smart is not most people. He wrote another response to all this last night, and he appears to be taking no prisoners:

While I don’t want to make this statement about the aforementioned Ms Harper, let alone her storied history of wanton online abuse and harassment, in order for me to articulate the reason for this statement, I am left with little choice but to mention how we got here.

On the morning of Sept 24th, my day off, I was minding my own business, getting caught up with all the social media shenanigans when I was made aware of two Tweets by Ms Harper.

As ridiculous as they were, even though I didn’t get the context at first, I just assumed they were a joke. Especially since I had never before had an altercation with Ms Harper. So I played along.

It wasn’t until I tried to look at her feed for context, that I realized that I had been blocked by her, presumably before she sent those tweets. Which is why they never showed up in my feed and I only saw them via re-tweets and mentions…

In support of this, I submit the following Storify which completely changes the narrative and skews the timeline and sequence of events. Complete with Tweets by myself and others, taken completely out of context and manipulated in support of said defamatory and false narrative…

People who know me, know that I try to maintain an intensely private personal life. One that is completely detached from my business as well as my infamous online persona. In this instance, knowing that ignoring her would not make her stop – since that’s how **bullies** operate – I was left with no choice but to make the comment that I did about my wife, as well as her photo.

Subsequently, I made a series of tweets for clarity, and which someone was kind enough to compile into a TwitLonger…

During this shitstorm, I was informed via DM that I had been placed on theblockbot as Level 1.

Naturally I was curious. Even though it was amusing to me that it is now so ridiculous that being on it is like a badge of honor now. The hilarity that ensued in my feed over this, is pure joy to behold. Despite my best attempts in trying to find out why I was placed on it, I was met only with ridicule and trolling. One of which was perpetrated by one of their own female admins.

To the extent that amid my search for answers, this person instead sent me this YouTube video for my troubles.

This morning, I engaged this person in a discussion in order to find out precisely why I was placed on this list shortly after being harassed by Harper. Here is an archive of the exchange.

Then sent me a link which is supposed to articulate why I was added to this blocklist. As expected, it’s pure bullshit…

A statement has already been prepared by my attorney to be dispatched to not only GoogleIdeas and Twitter, but also other groups who seek to shield and empower these people, try to pass them off as innocent victims (yes – they are in many regards) while these very victims are doing precisely that which they claim to abhor. It is this double standard that has tainted the spirit and nature of online discourse and in which the lives of many innocent people – many of whom can’t defend themselves – have had their lives ruined.

This will not stand.

UPDATE: As if on cue, less than 48hrs after the Harper Incident, another member of the pose, Brianna Wu, decided to jump on the bandwagon. And as shocking (not!) as it may sound, she too lied about my experiences (arguments) with her. But given my experience with Internet discourse and my penchant for archiving every goddamn thing when dealing with lunatics or people off their meds, I made short order of her bullshit: I posted the archives of both Facebook discussions I had with her in the past.

It was so fucking good, that it was extremely hard to cut down to excerpt size, to be honest with you all. That’s why I suggest you go read the entire thing when you get a chance. Since he’s already notified Randi of her misdeeds, that also sets up a standard for the future. So, when she steps out of line once again, his attorneys can point back to that notification, and move on from there. I literally salivate at the idea of this. 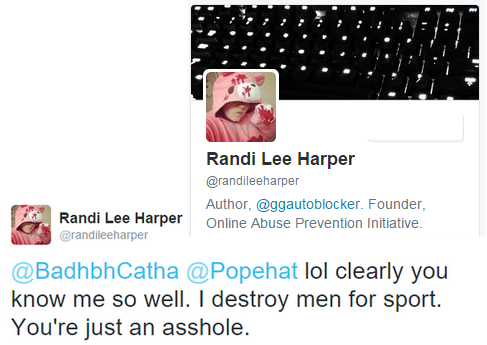 There’s so many things I’d like to see her be forced to defend, and a deposition would allow Smart’s attorneys to really dig deep, as I mentioned the last time I talked about this subject. Please fuck up again, Hamburger Harper. The good thing about all this? I know for a fact that you will. As Master Milo pointed out, your whole life is nothing more than one big garbage fire.