Do you remember way back at the beginning of GamerGate, when the other side used to always bring up the talking point of Gamasutra being for developers, and not actual gamers? “So why are all you pleb gamers getting so bent out of shape at us telling the people who make your games that you’re dead?” Yes, that was actually their argument. OK, fair enough. Let’s take a look at the recent numbers, then, if devs are your audience.We don’t have the internal numbers, but with external numbers this poor, one can only imagine how poorly it looks on the inside. Intel may have come back, but most of the readers, have left. They’ve had a couple hollow PR victories over GamerGate, but that doesn’t mean much when your site is burning down around you. Take a look at these Alexa charts (and I’ve found them to be pretty accurate, although about a week behind): Even on the one metric site I found that show them not affected much by GamerGate, their brand was still synonymous with the racism and bullying of Leigh Alexander. This isn’t where you want to be if you’re Gamasutra. 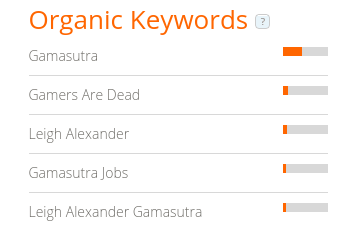 So when they say we haven’t accomplished much, they’re full of shit. We’ve forever compromised brands like Gamasutra. Leigh Alexander and her corrupt pals have been exposed for what they are. Before GamerGate, these people had been getting away with most of this unchecked. Sure, there were forum posts and the random blog here and there, but now we have our own press, and a community who follows these issues daily. Back in the day, there was none of that. We’ve made a huge difference.

Look at all that we’ve accomplished the last nearly 5 months. We started from the very bottom, with no infrastructure whatsoever. In the face of a heel turn by moot, and an unprecedented assault by the mainstream media, we’ve built ourselves into a fighting force to be reckoned with. We’ve taken some losses, but we’ve also inflicted huge damage on the other side.

So keep that in mind as the coming months and battles roll on. They want us to get discouraged, but there’s absolutely no reason to. The core remains strong. Gamasutra, Gawker/Kotaku, Polygon, Game Informer, and the rest of the corrupt gaming press are counting on us fading away. Now is the time to press forward.