Did Media Cover Up Zoe Quinn’s Past Adventures, Including Assault Allegation Against Journo?

We all know that when you talk about Zoe Quinn, drama is bound to come up. I thought we’d learned all there is to know about her professional career, but as it turns out, that’s not the case. Well, maybe some of you have heard of what I’m about to tell you, but it’s certainly news to me. I received an email from one of the members of our community, and I’d like to share some of it’s contents, and discuss their significance.

(Many thanks to @Capt_Privilege for providing the information for this report. He started doing some digging on Phil Fish, Zoe & Fez. He didn’t find anything there, but did find all this. Kudos, Captain!)

As it turns out, Zoe used to write for a publication called CGMonthly (now CGMagOnline.com). She made several serious allegations against Brendan Frye back in the spring of 2014 (although the events seem to have occurred in October 2011). Here’s some tweets that will clue you in better than I likely ever could. See for yourself: 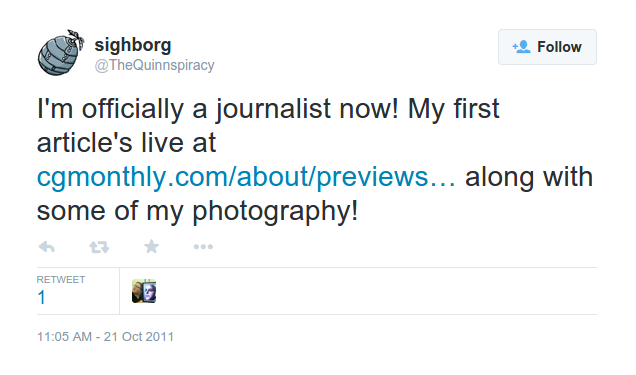 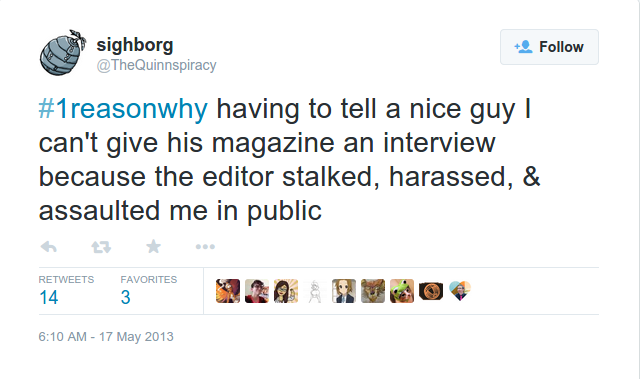 There’s way more in the gallery below, including a picture of the renamed website, and the accused. Unfortunately, Zoe Quinn’s writings cannot be retrieved at this time, as they seem to have been scrubbed from the Internet.

Mr. Frye was not silent. He put out a pastebin about Zoe’s accusations, and in the interest of fairness, I’m going to republish it below. I’m not going to link to it, however, because he doxes himself at the end with multiple phone numbers and an address:

It has come to my attention that there is a fair amount of misinformation going around regarding myself and Zoe Quinn. I am writing this email today to outline events and clear up any errors that may be present while still keeping information truthful and direct.

Zoe Quinn and I met as friends but after a few nights of spending time together the relationship turned physical. At many times during this physical relationship Zoe mentioned that she “liked me” (chat and text transcripts can be provided if necessary but due to the personal content on both sides would be preferred not) but it was also viewed that it was casual and nothing serious was going on with either side of the relationship. There was no business relationship what so ever at this time and was completely unrelated to C&G or any C&G operation. Other than the fact she was striving to do game design there was little to no overlap with work.

Around five (5) weeks into this relationship Zoe mentioned that she had “Real feelings” that I at the time did not return verbally. It was also at this time that she commented that she wished she could write about games since she has experience doing so for other websites. It was suggested on my part that she could submit work to C&G but I would have no part in the approval process and it would be left completely up to Mr. Wayne Santos, thus ensuring there is no bias in the acceptance of articles. It was also at this time she expressed a growing desire to attend MTL Game Summit. Again this was allowed but with the strict requirement that Wayne approve all articles that may be written from attendance. At no time was Zoe on any payroll or worked for C&G it was strictly a on article basis that I personally had no part in the approval or rejection of.

On Monday the 24th it was decided we should talk about the relationship situation and if we should change things. This conversation was done over MSN and as such a full transcript can be given if it is so required but because of the personal nature on both sides it is preferred not . In the end with talk on both sides that we would remain friends but there would be no more physical or emotional relationship. It was suggested by me that time should be spent apart to avoid confusion but also to ensure both sides are okay with the situation as it stands. Zoe rejected this idea saying it would “complicate a friendship” and that she wanted “to ensure we stayed close” but she also wanted to ensure we stayed “honest and open” friends. This was agreed upon.

By the Friday the 28th personally I had moved on and was now seeing another girl (Sarah who can be contacted if so required but sensitivity should be taken due to a new relationship) so viewed Zoe as a friend only. That night around 7 or so at night I learned a dear friend and Ex was in the hospital, at around 8 I learned she passed away. This hit me very hard and the fact I had been drinking this night made it worse. In my mind there were few people I knew at the ToJam event that I could talk to about personal matters and Zoe was one of them. A few attempts were made to talk but due to the sensitive nature of the information it was not something that is easy to talk to a stranger about. Later that night at a Site3 party I learned Zoe had left since I knew no one at the party I decided to leave as-well. On my way home a few attempts were made to call other friends but it seemed no one was picking up. I saw Zoe and Miguel walking and decided it would be better to not bother them. On a final attempt to reach a friend with no results it was decided that Zoe would be the best friend to talk to about the situation. Sadly and regrettably in my drunken state my attempt to pull her aside to talk did not work as intended. On the next day an attempt was made to apologize to Mr Sternberg with regrettable results

As was stated previously full text and chat transcripts can be provided if necessary but overall this is a regrettable and unfortunate misunderstanding and overall should have been a situation that was discussed behind closed doors rather than bring the community as a whole into it.

So, there’s his account. I won’t choose sides here, regardless of what I think Ms. Quinn (scuzzbucket). I’ll leave that to you, the reader. But, I will say that this is a stunning bit of news. Why hasn’t the media ever reported on this? Here we have Zoe Quinn accusing a journo of grabbing her and dislocating her shoulder and we’ve never had a serious media examination of it? She even used the would stalking.

I can guarantee you that if some random GamerGate supporter grabbed her and that happened, it would be in the national news for weeks, hundreds of columns would be written, the person in question would be in jail…in short, it would be a fucking circus. But when a member of their corrupt clique has accusations lobbed at them, you don’t hear shit about it. Talk about hypocritical. Maybe we should have a Law & Order episode about this one. Dramatize it a little. These people are truly disgusting. They spent all this time attacking gamers, when the only accusation of real violence, is against one of their own. Eat a dick, mainstream media.