Fuuuuuck. I’m tired of writing about Big Randi Harper, but the dirty fucker keeps herself in the news. I was up last night when she claimed to have gotten swatted, but I was holding off on addressing it. Now that so many people are claiming that she faked this stunt for good publicity after her problems yesterday, I feel like a writeup is appropriate. Keep in mind that we can’t say for sure whether she faked all this or not. She could come out with more substantial proof later today. But it does seem like she’s at least fabricating some details.

Here’s here spiel from last night. I’ll keep it short because it was nauseating (most things from Randi usually are):

Made friends with more police officers, they are now utilizing me as an anti-SWATing resource. Take that. pic.twitter.com/erAQfpTT3t

Take heed: THE ONLY REASON THEY SAID THEY DID NOT COME IN WITH GUNS IS BECAUSE I FILED A REPORT FIRST.

Immediately, people began to ask questions, since Randi is a known liar (and because of her troubles yesterday):

Kinda curious that Randi gets swatted today of all days, isn't it? #GamerGate

(Ivy included a link to my March 5th article that exposed Randi as a phony.)

OK, so you get the picture. A lot of people were doubting this, myself included. Even if she somehow proves it today, the skepticism is warranted when you’re dealing with a con like Big Randi. Still, I held off on writing something. When I woke up and saw the new evidence, I knew I had to chronicle it:

Randi delete that. I just got off the phone w/ them. That RD # is from January and the SN isn't even working today. Stop lying @freebsdgirl

Want more proof Randi lied? Every mention of calling and confirming the RD # is being deleted from Ghazi.
Ha. 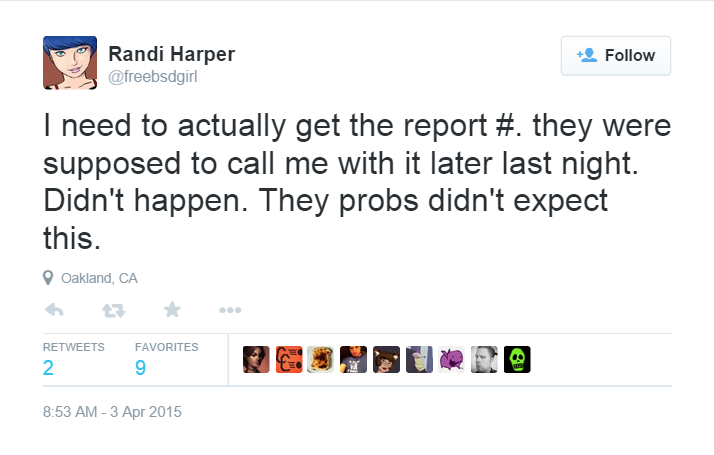 There’s another tweet where Randi talks about writing a blog post about the entire matter when she gets a “more complete set of info.” I’ll hold off on making any pronouncements until then, but this shit looks fishy as hell. Assuming she was even swatted (big assumption at the moment) who’s to say who did it? She pissed off a lot of trans activists yesterday. I could only imagine what they would like to do to her. Harper makes me sick to my stomach, but swatting is way out of line. I’ve been threatened with that myself and it’s not something I take lightly. But given all of the evidence that came in today, I have to question the narrative being put forth. If it turns out to be true, so be it. These are the questions being asked right now, though.

Let me know what you think down below. I’m also working on a couple other stories that I would have had done had I not decided to get a good night’s rest. Emails are working, and we’ll talk about that later. Anna Merlan is also on the agenda. So stay tuned.

UPDATE II: Here’s Randi’s blog post from this afternoon. It doesn’t really clear up any of the issues presented so far. As noted above, it’s supposedly going to take two weeks to get all the info.