It’s been an interesting few days, as I mentioned earlier. The downtime means I haven’t gotten to cover some stories that I otherwise would have. Since Rand Harper and her thugs continue their unrelenting assault on free speech and expression, maybe we should take a harder look at Harper herself. Actually, we don’t have to do too much, because the Blocklist Blockhead voluntarily gives out incriminating evidence. It turns out Literally Blue likes to dye her fucking DOG blue as well. Yes, you read that correctly. This poor pooch has to walk around looking like some mutant Smurf to appease this hypocritical ass-sore.

People, this is animal abuse. There is no other way to put it. I’m not a fan of PETA, but at least they called out Randi’s dangerous and potentially criminal behavior: 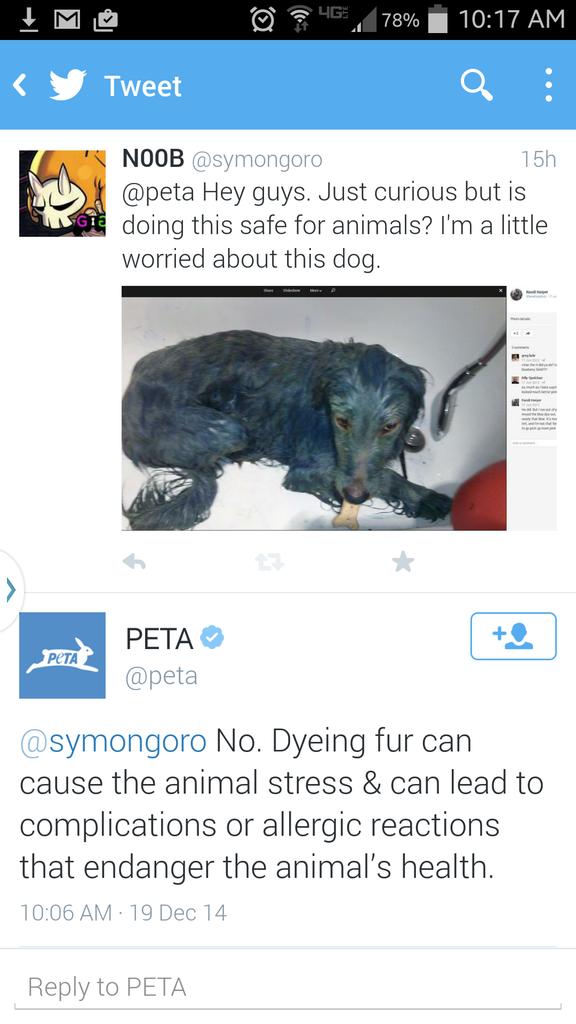 The dog looks damn near suicidal. The ghost of Brianna Wu’s dog feels sorry for this motherfucker. Could you imagine having to show your face to the other canines in the neighborhood looking like this? I seriously feel sorry for this dog. It’s bad enough that the poor thing had to live with an owner like Randi Harper. Now it has to look like a freak because of her as well. Randi, please seek help. Dyeing dogs is not normal behavior.

But there is some behavior that’s normal for Randi, namely, the hypocritical type. You see, according to screenshots provided to me earlier on Twitter, Randi Harper used to talk shit about feminism. Not only that, she called feminists “tards” (which is of course short for retard). I’m not one to police speech like that, but it certainly does seem inconsistent with how she portrays herself. 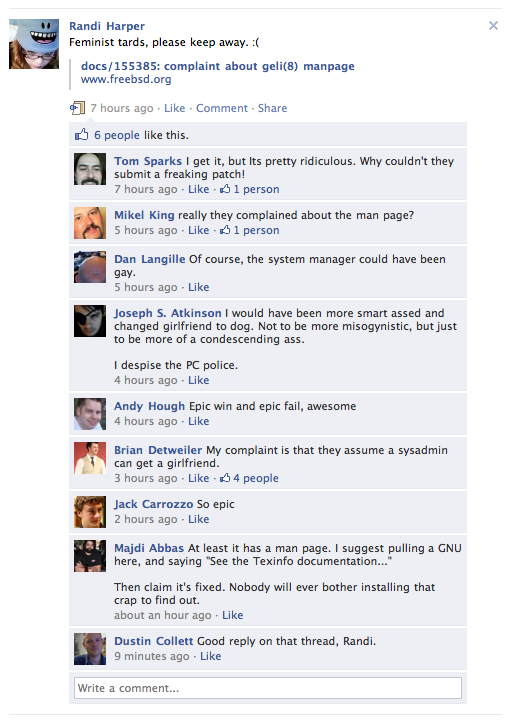 If you look at the full context of the episode, it’s even more hilarious. Here’s the original complaint, and the response from Randi, on the FreeBSD site. Of course Randi had to blast her behind her back on Facebook, because that’s what she does.

Here’s the complaint, which is fucking idiotic, I must say:

She proposes a couple ways to fix it, and I they did change it. But let’s face it, no one cares. I know I certainly don’t. I would like to see Big Randi look like a fraud though. She’s 100% right, don’t get me wrong. But I wonder what 2014 Randi Harper would say to the 2011 version. I have an idea: “The con worked.”

The Blocklist Blockhead is a massive phony. That’s already been well-established here on the site. But, I thought she was at least serious about her radical feminism. As it turns out, it’s just one more example of fakery. These people use the language of the oppressed so they can ride the gravy train for the rest of their lives. It’s sickening. But, the one way to help stop it, is to mock them for the hypocrites and laughingstocks that they truly are (the other way is to destroy their enablers in the media). Stay focused on that. In the meantime, I encourage local authorities to look into Randi Harper’s animal abuse. This appalling behavior needs to be discoursed, and Big Randi is the perfect one to make an example out of.