OK, it’s been a long day battling Walmart, but for once I will spare you the details here, since it pisses me off to even think about it. There’s someone else who’s pissed off today, though, and that’s Disturbed frontman David Draiman . He’s been a staunch supporter of GamerGate in the past, even though he come into the battle a little bit late. But today he’s up in arms because not all of us want to condemn Trevor Noah, the guy who just got hired to replace Jon Stewart on The Daily Show. He made some supposedly questionable jokes about Jews and Israel. Apparently you can’t make jokes about that sort of thing now without inciting a backlash. It’s like these people have no idea what comedy is all about.

The jokes themselves are certainly off-color. But so what? Richard Pryor is my favorite comedian. I’ve heard a lot worse from him and a variety of others. Has he ever seen Curb Your Enthusiasm? Larry David has made racier jokes about Jews, and he’s Jewish himself. What is Draiman going on about? He seems like an over-sensitive type using his status to try and bully others into piling on Noah. I don’t even know Noah and would have probably hired someone more well-known here in the States. I have no reason to go to bat for him, other than in defense of comedy. Patton Oswalt offended me with his comments about GamerGate, but he was 100% correct with his tweets last night. These people are killing comedy. It’s an SJW-style mindset, to be frank with you. 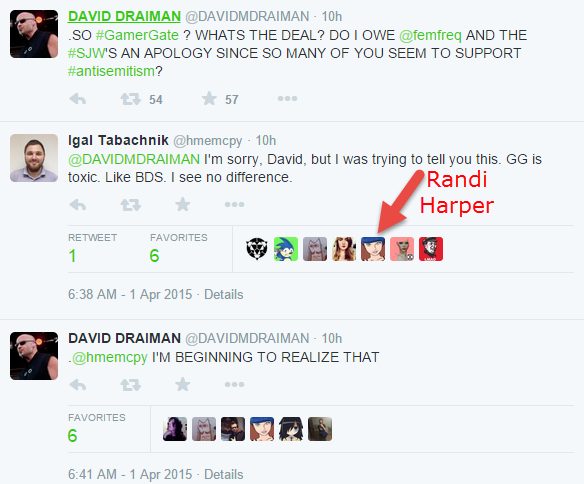 I made a couple of tweets of my own, but I’m hardly alone. It seems like most people are rejecting this, and just hoping that he calms down and comes back to Earth:

I don't support going after comedians for jokes…never have.

Those jokes aren't hate speech hahahaha. Get over yourself. Comedians shit on fat people all the time and you don't see me crying.

a pity DAVID DRAIMAN exposed as a free speech fraud. seems alot of people only support free speech when it doesn't offend them. #GamerGate

whether or not you agree with Draiman, had he not try to force #GamerGate to act by threatening to go against us, there wouldn't be a prob.

Draiman is now posting memes of himself.
Reminds me of Faces of Atheism.
What a loser.#GamerGate pic.twitter.com/7HGWFVptSI

I won’t go as far as some people did. I don’t know that it’s time to disassociate, but he’s been acting like a fool all day long. Hopefully he gets this out of his system. But even if he doesn’t, GamerGate continues to roll right along. I don’t know about you, but I’m not too concerned about it either way. It is rather amusing to see him freak out, though. So have a laugh, hope he gets over it, and move on. That’s my advice.