Good morning, loyal readers. We have a lot for you today, even though it’s the weekend. First off, Friday was the biggest day on the site since AirPlay, so thank you all for that. Also, we have a LIVE show today at 3PM EST over on YouTube. Check that out if you are so inclinced. OK, enough shilling. Let’s get to the news rundown, beginning with recent comments by the Chief Operating Officer (COO) of Electronic Arts, Peter Moore.

You know the drill by now. Here’s an excerpt of Moore’s comments to Fortune:

“We’ve gone from the personification of what we believe women should look like in a video game, to actually involving women in making video games, to today where at Electronic Arts we have some of our most powerful franchises overseen by women who manage hundreds of men,” Peter Moore, COO of Electronic Arts, says…

“I’ve seen incredible growth in the number of female game developers in the video game industry since I joined in early 1999,” Moore says. “You can look at the last twelve months with everything that has gone on with GamerGate, that it’s made us all pay attention to this issue. When we talk about what I call D&I, Diversity & Inclusion, at EA, it’s never far from our minds when we make hiring decisions.”

Look at everything that has gone on with GamerGate the last twelve months? I think you’re the asshole who needs to look at what’s gone on the past year. We’ve been demonized by an out-of-control press that has drifted into outright advocacy for the censorious and authoritarian social justice warrior agenda. Repeatedly, they’ve dishonestly tried to tie us to violence and terrorism, when we’re the ones who’ve been repeatedly subjected to threats of violence. Think about all the  bomb threats meant to disrupt our peaceful gatherings. What is this out-of-touch suit talking about? I know he ran EA Sports into the ground, but fuck. I didn’t know he was this fucking stupid.

Actually, blaming stupidity is probably too simple. This guy is signalling to SJW ideologues like Rami Ismail. And believe me, he got the message loud and clear: 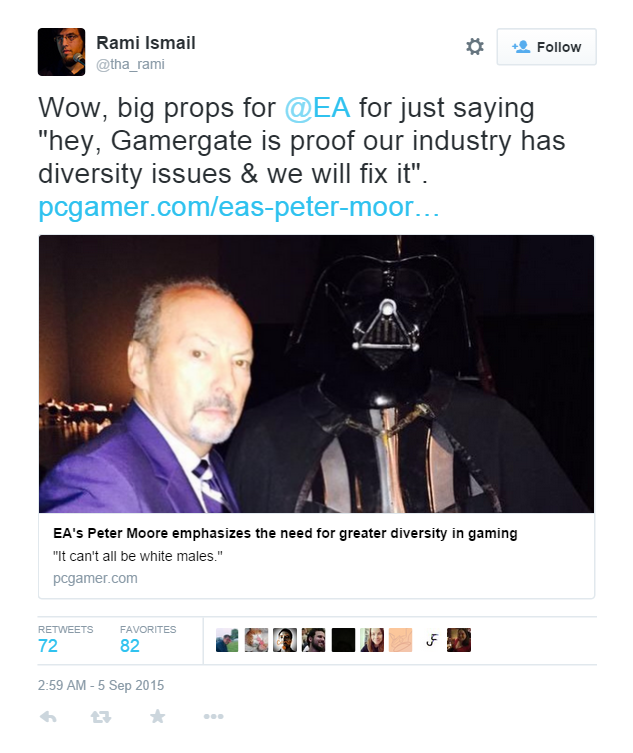 But, as always, everything usually boils down to extracting cash from these multi-billion dollar corporations:

.@tha_rami @ShamisOMally @EA Bet you are. This might allow ur no-talent hack friends to leverage some cash out of EA, Fem Freak/Intel style

EA, famous as the worst company in America, has called out GamerGate. Honestly, this is a good thing. Anytime we get mentioned in the press, even when they lie, it’s good. The free publicity usually causes at least a few people who read the original article to do some investigating on their own. This often results in new backers. Sure, there’s a lot of sheep who just accept the mainstream spin, but that’s changing more and more everyday. Shitbag companies like EA, and empty suit fails like Mr. Moore, can’t slow our roll.

Fuck EA for a variety of reasons, but this attack on #GamerGate was complete bullshit. I'm no longer going to purchase their products.

Just keep pointing out the facts and counterattacking the rad fem ideologues. Yes, it gets daunting sometimes. But if you don’t fight, you don’t win. We’ve done an awful lot of winning over the last year, so I say fuck being a loser. The press can continue to lie. Signalling scumbags like Peter Moore can talk shit. We’ll just keep pointing out all the ethical flaws of both.

In fact, instead of me spending an hour collecting all of EA’s fails, I ask the BasedCommentSection to post their favorites down below. I’ll work it into a column this weekend if you guys post enough. I’ll be back in a little while with another post. Enjoy the weekend, and happy college football opening day for those that care (like me lol). 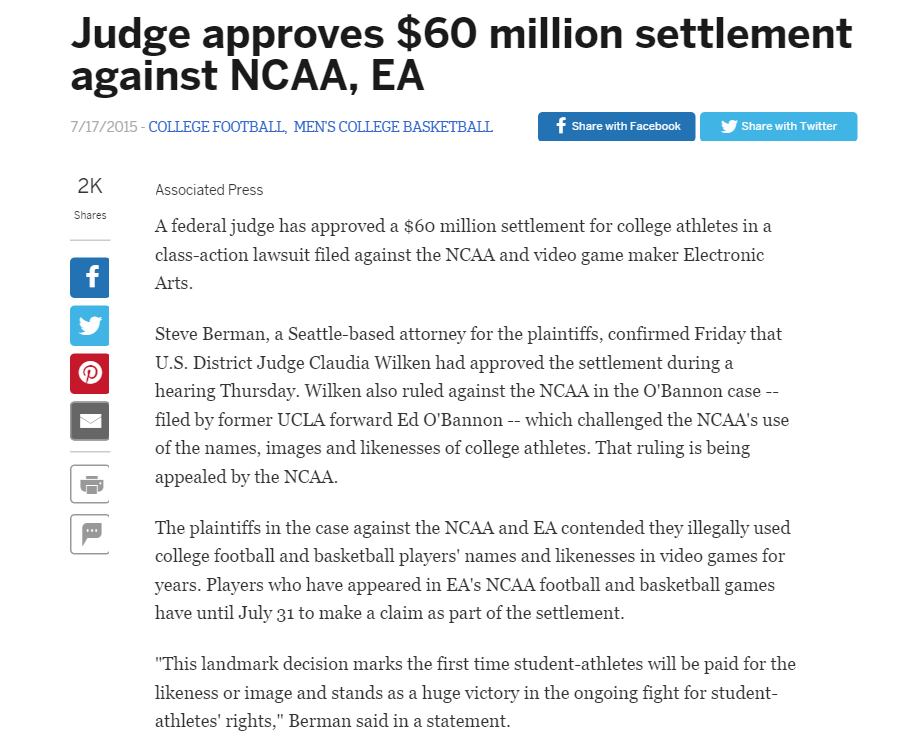