Josh Barro is an elitist scumbag who doesn’t even try to hide it. He can be amusing at times, true. But his Twitter account drips with such condescension and hostility towards anyone who doesn’t live on a coastline that even his bright moments are marred by the knowledge that he’s a massive cunt. Today, after the McDonald’s Twitter account fiasco, he let loose with his thoughts on both the fast food giant and Trump supporters.

Yes, he issued a pathetic apology a couple hours later. In no way was it actually sincere, because Barro is an elitist douchebag who looks down on at least 90% of the population. Granted, there are better things to be eating than McDonald’s. But the point is, for a large portion of this country, Mickey D’s is actually a vitally important institution. When times are tough and money is low, you can get a lot of bang for your buck there.

I remember when that article about the McDouble came out a couple years ago and it’s always stuck in my mind. I’d never really thought of McDonald’s cusine as anything other than guiltily pleasurable garbage food, but when you think about the value it provides for poor people, that kinda puts things in a different perspective.

Anyway, I could write for days and still never sum it up better than Chris Arnade did in this epic Twitter thread. Yes, he works for the Guardian. Yes, his politics are probably different than many of you. Still, none of that detracts from his amazing social commentary or the beating he gives Josh Barro and media-types in general.

I really suggest you read the entire thread, because it’s one of my all-time favorite things on Twitter. As one person said, if they gave out Pulitzers for tweeting Arnade would be at the top of that list. Oh, and he hit on Trump there at the end. He couldn’t be more right. I think most of Trump’s supporters are fully aware of his shortcomings. I know I am. There’s a chance he blows it. Given his volatility, that might even be a big chance.

Still, one of the main reasons I voted for him was rub the elitists’ faces in the mud. It wasn’t the only factor, but it was high on the list, to be sure. The point is, Barro and his kind actually helped make Trump possible by sneering at “flyover country” every single day. People are tired of being looked down on. You don’t like us? Well, shockingly, we don’t like you either! Now here’s our man Trump to fuck up your shit for a good 4-8 years.

These clowns will never learn, of course. 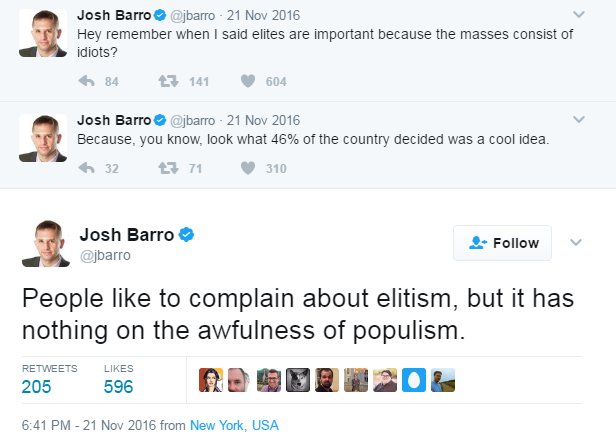 Because that’s who they are.