Late last night, or, technically, very early this morning, I did a long stream about the recent Bully Hunters fiasco. We went over a lot, so if you would like to watch it (though the first hour is still processing, unfortunately) it’s listed below for your viewing pleasure.

But, this post if for all of you who don’t feel like sifting through a 3 hour stream, or thousands of tweets, in order to figure out just what the fuck is going on with this latest episode of cringe in the video game industry. Some are even going so far as to label it the beginning of GamerGate 2.0, although I’m not sure I will go there just yet. However, there does seem to be a highly coordinated push to inject more SJW poison into our favorite hobby. Just look at the recent news about the Fair Play Alliance and all the gaming companies that have signed on to coordinate lame “harassment” policies across multiple platforms and games. We could even point to the ridiculous “teabagging” fakery from earlier this week. Point is, a lot of stuff has been happening in the gaming space as of late and I would be lying if I said it didn’t remind me of some of the dumb shit I saw during GamerGate.

Anyway, back to Bully Hunters. For those of you who don’t know what it is, here’s an excerpt from one of the asslicking articles done by the gaming press in the run-up to last night’s launch…

The Bully Hunters are a collective of women who play Counter-Strike: Global Offensive. They’ve teamed up to target in-game misogynists and trolls who harass women.

Describing themselves as a “vigilante hit squad of elite female gamers,” the Bully Hunters will be livestreaming their work on Thursday afternoon at 7 p.m. ET / 4 p.m. PT. The video above gives you a good sense of what they’re about (warning: it includes some strong language). The video warns: “If you think harassment is just part of the game, we know who you are, we know what you play, and we are coming for you.”

Online games spaces are notoriously hostile to players who identify as women. Now, CS:GO players who face abuse can report into BullyHunters.org. The team says it will then “infiltrate CS:GO and eliminate offenders from the game through the sheer force of their unmatched skill.”

The whole thing sounds like a fucking comedy skit, but it isn’t. It’s real life. Well, allegedly. Come to find out, most of the show last night was faked. The footage at the beginning showing the “harassment” of female gamers was recorded by actors. The gameplay examples were phony as fuck, with the host, Natalie Casanova (aka ZombiUnicorn), admitting all of that on Twitter this morning.

The #BullyHunters stream is faking all their matches.
The very first person being bullied was "therosethorn" and they called in "BULLY HUNTER_77".

They are the same person. pic.twitter.com/ORETUMSuIP

Just so you know it was stated at the very beginning, you may have missed it. pic.twitter.com/wTIJSZxqaS

Well, the funny thing about her tweet here is that she didn’t read the words as they were written on the page. It’s almost like it’s a bogus excuse.

Imagine that. Feminists making shit up in order to scam money from companies and consumers. I never would have guessed!

We also have Ms. Casanova using some very problematic/homophobic language a few years back. This appears to be a bad look for a company like SteelSeries, which sponsored this shitpile…

Now since @SteelSeries is so anti-bullying what is their stance on their own spokeswoman for their bully hunter initiative calling people faggots in game? pic.twitter.com/YJPXRFCT0U

We decided to support the #BullyHunters initiative as we firmly believe that no one should be harassed for doing something that they enjoy.

If the only thing that comes of this is a conversation around the topic then we feel it’s still a step in the right direction. https://t.co/I94YUcg0Vf

She should probably go back to the Old Ways, since she looks about 100 times more fuckable in that clip than she did last night. Perhaps participating in a conjob adds 25 pounds on camera, though. Not sure. She had an excuse for this foul language, by the way. It was all the fault of 4CHAN HACKERS!

Yes, she actually tweeted this.

All of this actually didn’t even get me that worked up. Honestly, I’m quite used to seeing feminist scams, at this point. Cringey livestreams about so-called harassment are hilarious, but you know what’s not? Threatening DMCA takedowns of people who make fun of you. She did this a few times over the last day or so, with this being the most blatant example…

I don’t think I need to tell you this, but I’ll say it anyway: This is absolutely not how copyright law works. Neither is this…

Thank you. Guys, making critical review or journalistic content all you want. But be aware if you're just making malicious content to harass & attack further, that's not fair use & is subject to DMCA. https://t.co/TvrpWOoh3s

If you're not just making malicious content just to bully/harm, then go for it dude. That's all I'm saying. Journalistic content & critical review is fair use & that's fine. I was merely pointing out harassing content does not constitute "fair use."

As of now, I haven’t seen any DMCA issues, but it looks like those might happen based on those outrageous tweets.

There’s a lot more to this story. Like how the “clinical gaming counselor” they brought on their sham of a stream is actually some kind of diabetes specialist. Or how the entire thing was planned out by a “marketing agency” out of Chicago, probably with the end goal of selling more SteelSeries headsets.

FCB Chicago is enlisting its talent as part of a passion project to fight harassment in the video-gaming world.

FCB Chicago and its St. Louis-based sister agency, New Honor Society, are partnering with SteelSeries, an esports and professional gaming group, to launch this movement. The Bully Hunters also have the support of the National Coalition for Women and the Diverse Gaming Coalition.

Starting Thursday, April 12, the Bully Hunters movement invites harassed gamers to seek support from Bully Hunters and receive help from what the agency calls a vigilante hit squad of elite female gamers — and some men — who will eliminate offenders from the popular game “Counter Strike: Global Offense” game through their outmatched talents.

If that was the idea, I have to think that it was a massive fail. Even SJWs were making fun of this clown show. How could you not?

Oh, and there’s a lot more from Natalie Casanova. You would think these people would learn to pick some cleaner people, but they never do. It would be like hiring me to front your anti-drinking campaign. 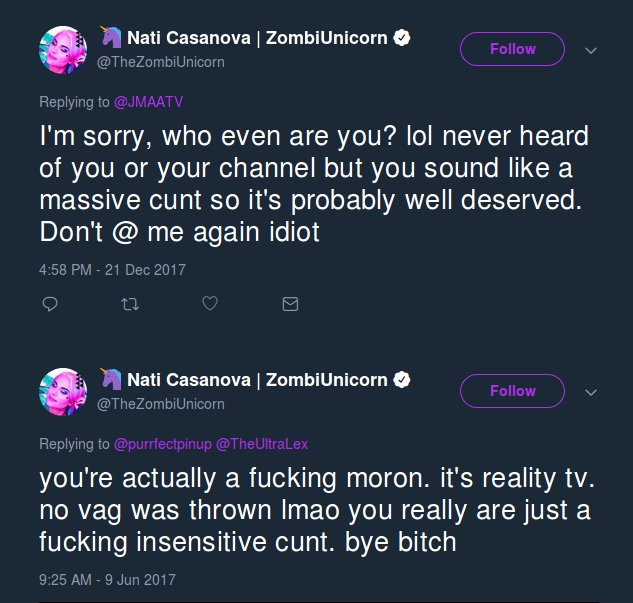 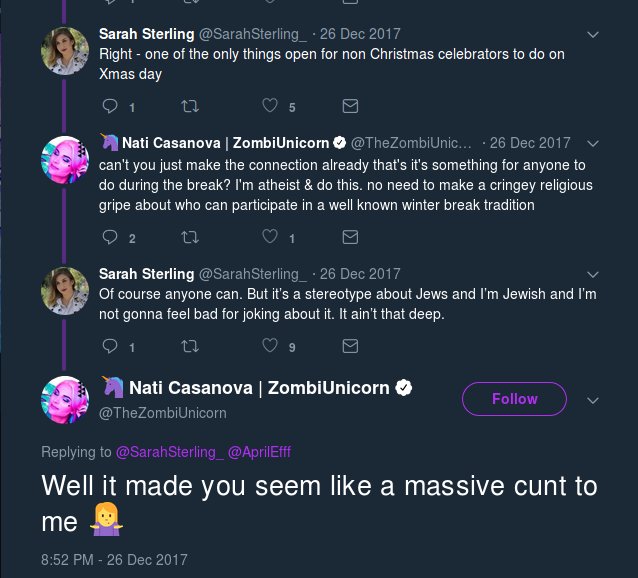 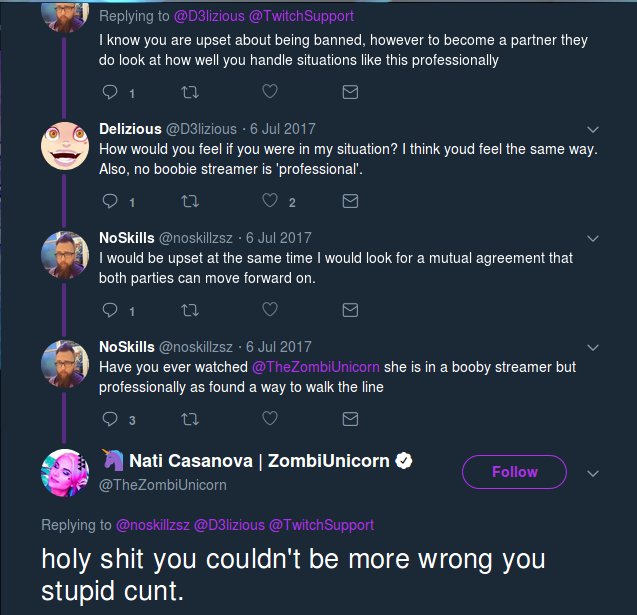 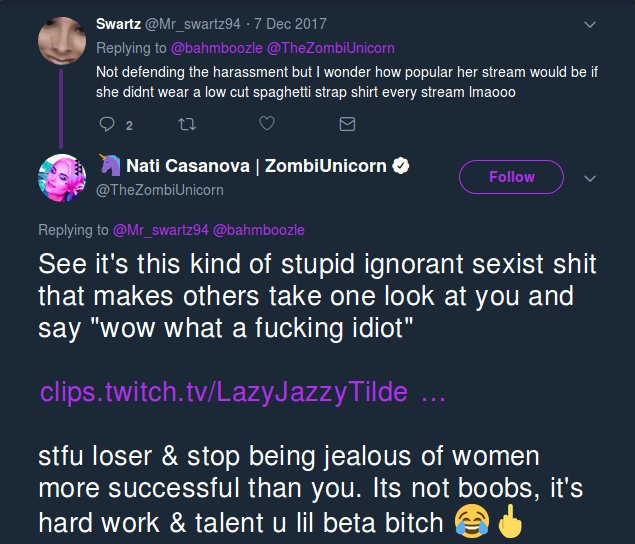 There’s also some other curious things happening, like how her Playboy shoot mysteriously disappeared from their site on April 9th, 3 days before this shitshow.

I haven’t mentioned the part about their website linking to the wrong Twitter and causing an alleged male victim of rape to get spammed with notifications.

The photo is what you get when you click the twitter link on their website. thier "handle"@BullyHunters leads you to a man who was raped at 16 and was pleading with twitter for help. He doesn't seem fake. They are literally harassing someone. The fucking irony. pic.twitter.com/1zwB9QDkqI

Notice the "video glitch" graphic on the #Bullyhunters website? pic.twitter.com/7vIMuQbdIh

I should have gone into more detail. The Bullyhunters claim they're a group of women fighting harassment. If you look at the address bar you see "fcbchi" or FCB Chicago, an ad agency. The highlighted part shows the file name, revealing it was made for Steelseries, their client.

Or we could talk about the Bully Hunters Website itself, which is some Anonymous-themed ultra cringe.

And what about this screen from the broadcast, which describes the “three types of bullies?” 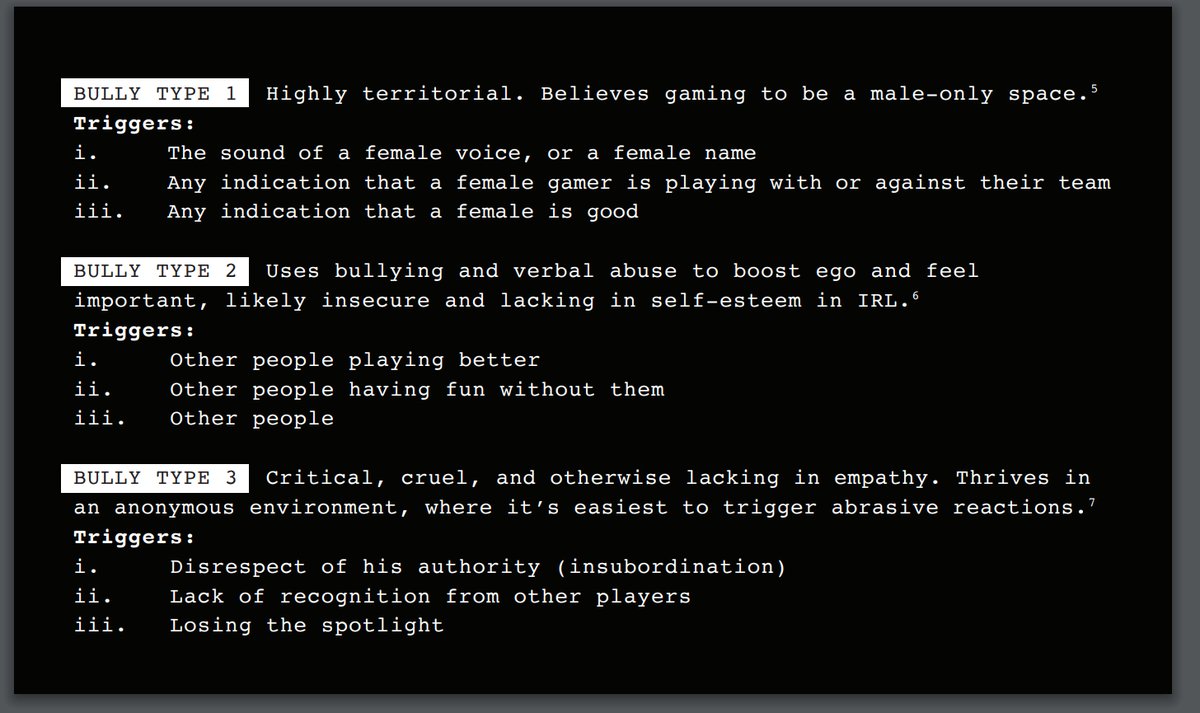 Or how signing up to their website gives the ad agency access to all your data, which they can then sell to the highest bidder… 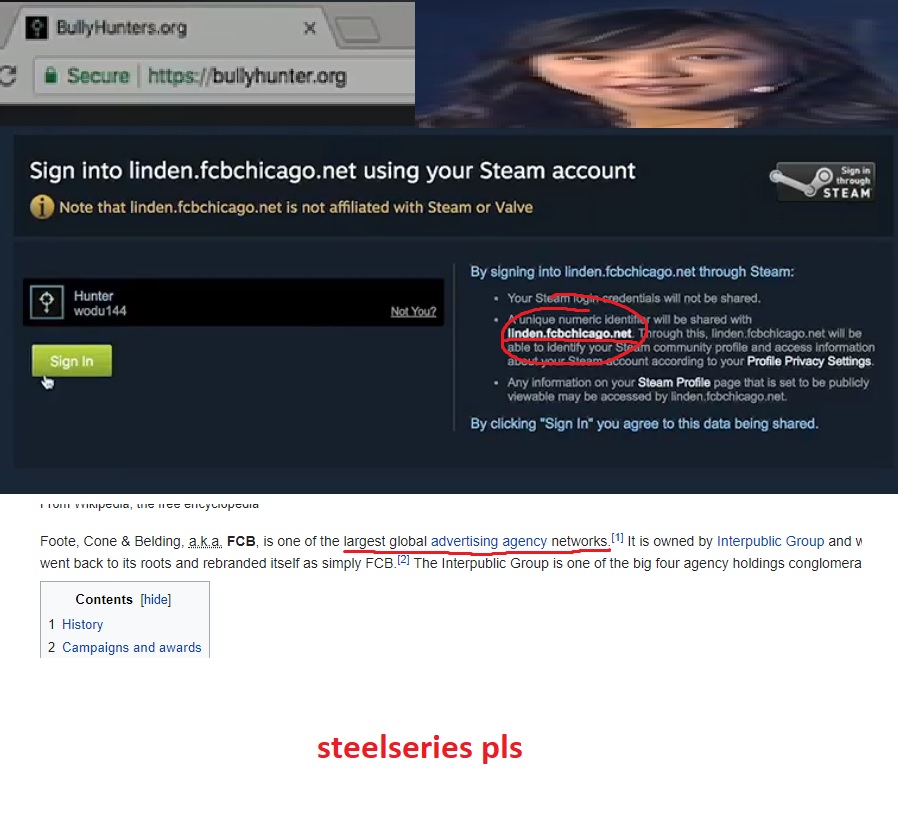 We talked about all this, and more, on the stream last night. We also had a big discussion about the game industry in general, along with some other, more eclectic topics. Go watch it before these losers try to have it DMCA’d.

Oh, and before I head out, I guess it should be noted that Natalie Casanova (aka Nati, aka ZombiUnicorn, aka scamming fraudster) is now trying to backpedal away from this catastrophe as quickly as possible.

Well, you’re finally using some sense, dear. Even though it’s too late to avoid a lifetime of memes about this disaster, you might be able to escape with some of your dignity, if you back away now.

Then again, probably not.