As many of you may may know, I came onto the scene by exposing Leigh Alexander. All those fucked up tweets you see? All of them except one were printed here first. Don’t get me wrong, I didn’t discover them. Credit for that goes to the anonymous industry source. I just lay it out once again to illustrate my ties to this corrupt journo/critic/whatever she wants to be called that day. But as I’ve learned more over the last few months, I started to view my analysis of her as a little bit off. I used to think she was an ideological warrior intent on imposing her view on the industry. Now, I tend to think she’s a phony.

I guess it’s possible that she really believes what she’s saying. Some of her friends think so. But look at this article from 2008, and juxtapose it with her current public position. They don’t jive at all. Did she hop on the SJW Gravy Train thinking she could rake in more money that way, and get locked into their employment network? Seems likely to me: 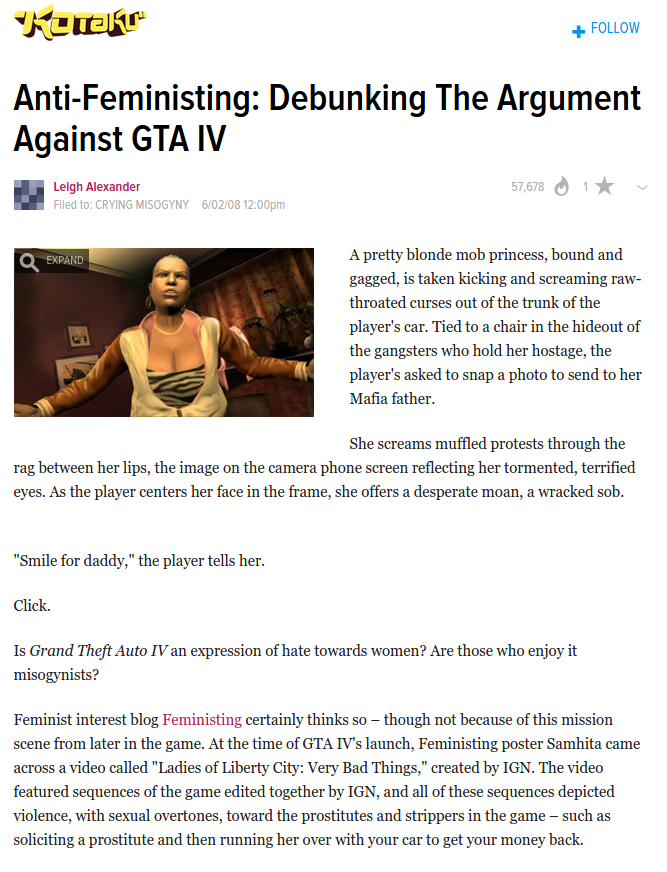 “To call misogyny here is divisive, actually, implying that the treatment of women needs to be elevated above the treatment of any other group – as if “woman” were a separate, special “race” with a unified mind. We aren’t, thank you.

In fact, with all due respect for the feminist community, demand for that sort of favoritism seems to breed resentment – perhaps even the very resentment that GTA IV provides the framework to explore. Just who are those large-breasted logo silhouettes on Feministing’s website supposed to be giving the middle finger to, anyway?”

That’s just a small sampling. She used to go on and on about how great GTA is. Click the screenshot for more. Now look at what she says today: 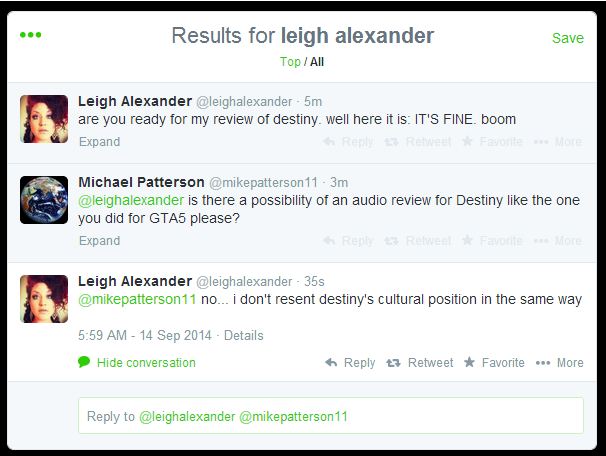 Now she resents Grand Theft Auto‘s cultural position? What made her change? It’s not like they’ve been making GTA‘s every year. Also, the user mentions her GTA V review. In it, she says:

“I thought the game was misogynistic.”

She also made this tasteless (and worse, unfunny) mock review: 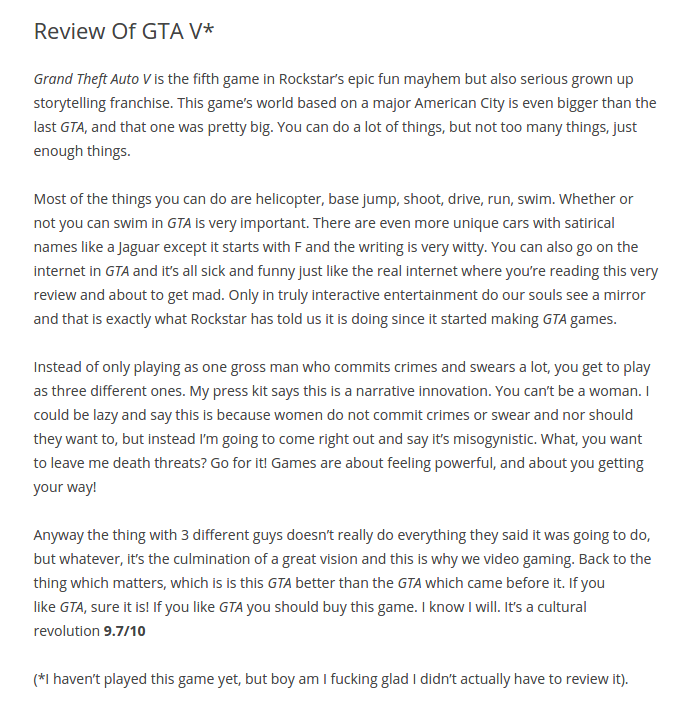 The woman has done a complete 180, is what I’m getting at. She’s reinvented herself so she can make more money, and become ingratiated with the SJW network. Don’t believe me? Take a look at what she was up over her “transformation years”:

BUT LETS NOT TALK ABOUT #GamerGate BECAUSE THEY EXPOSE US AND OUR SJW#LESBIANSPIDERQUEENS@Nero @leighalexander pic.twitter.com/gRgzNmG9Q1

Selling out to the hivemind does has it’s advantages, though:

Back when I first started writing about Leigh and her ilk, I felt like she had been on a lifelong mission to stamp out gaming culture for some perceived sleights during her childhood. Now (as I alluded to in the open) I think that was a backstory she made up to fit in better with SJW crowd.

“The third and final reason is, well, she declared war on us first. She’s written numerous anti-GamerGate screeds, and misrepresents our cause at every turn. Leigh has made making gamers “culturally irrelevant” her life’s work. People are naive if they didn’t expect us to return fire. In this case, returning fire isn’t that hard. Leigh Alexander has a record of nastiness stretching back years. You don’t have to dig very deep to find the highly offensive behavior she’s linked to. It’s staring at you right in the face.”

I think my analysis was off a little bit. She was/is a giant piece of shit, but it’s a little more complicated than I first assumed. We’re dealing with a person who will spout any ole agenda, as long as it gains her cash and notoriety. Her friends knew the deal:

“She’s a fraud through and through. That hasn’t changed.”

“What I can say, though, is that I believe she’s “there.” She was manipulative as a teenager, and it bought her attention and friendship, so I have no reason to believe she wouldn’t continue to manipulate internet culture in the same way.”

I think her old buddies were right. Like so many of our other opponents, Leigh Alexander seems to have sold out for the almighty dollar. Perhaps she’s been spouting the same nonsense for enough years as to actually believe a little bit of it, but I doubt that. She probably just loves the elite status and vacation that comes with being a radical feminist ideologue. Like so many others on the opposite side, Leigh’s seems to be a fucking phony.