So, I’ve been up for a few hours, but I decided to argue on Twitter with the “ethics-only” faction of GamerGate that has recently become more hardened. This debate has creeped up before, as I mentioned the other day (great reader editorial as well). But since then, some continue to preach about it, make videos about it, co-sign videos about it. That’s all fine, but it causes me to want to give voice to the opposite side, and that’s what I’ve been trying to do. Some people are totally unhinged about things though, as you can see below:

As Sargon of Akkad noted, this guy doesn’t represent all of the “ethics-only” side. He’s now busy posting gore shots in the tag and crying about how SJWs were on GamerGate’s side at some point. I have to say, I don’t recall such a point. But some people are using the same sorts of exclusionary rhetoric, “ethics is the only way, shut-up about the rest,” stuff like that. I swore I wasn’t going to address it again, but it seems like people are determined to drag this debate on into the next week. Why are they so determined to push this line? Robin Gething, who used to be Steve Tom Sawyer’s hatchet-man, put out a video this weekend. He had conducted a stream the other day where he repeatedly called me unethical without one shred of proof. I see this sort of thing time and time again. As it turns out,  in this case it looks like Gething himself was unethical: 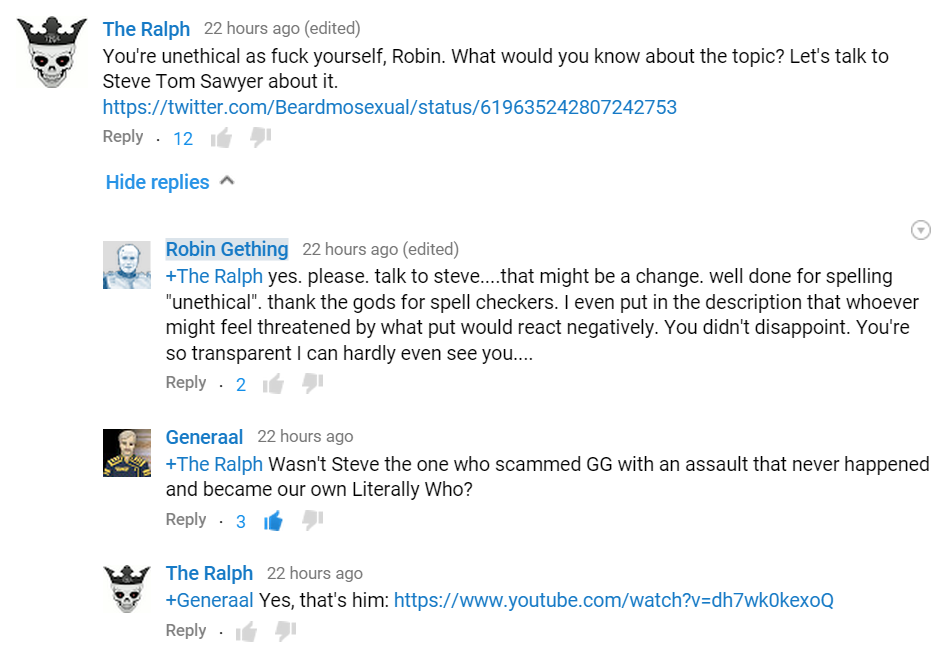 I don’t have to tell you, being called unethical by someone like that doesn’t mean much. But there are some well-meaning folks. I like Sargon a lot. But I do feel like it’s a shift, because him and I both have talked about all sorts of things in the tag before. I just don’t see why we need to limit ourselves. It’s only going to diminish our numbers and cause needless infighting. Did I use the “ethics-only cuck” term? Yea, cause I think it’s funny. There are some good people who disagree with me, but there’s also some seemingly disingenuous people.

Let’s get another myth out of the way: I favor talking about ethics and SJW bullshit. Both should be highlighted, as they go together like ham and burger (bonus points to whoever names the movie that came from). SJWism, radical feminism, whatever you want to call it…that’s been at the heart of the beef since day once, because it’s what all these corrupt journos use for justification. To pretend otherwise is just wrong.

I certainly don’t want to tie in Oliver Campbell with any of what I said about Gething and Sawyer. That’s my own thing. But he was right on the money with how he described things the other day:

Before I go write…

Oliver Campbell, dead on the money once again. #GamerGate pic.twitter.com/4taUXiElMb

At the end of the day, people will do what they want. Here’s some more reaction from Twitter:

One more thing before I get to the rest of the agenda for the day. There was some fake tweets going around last night about Anita, and I shot those down myself on Twitter. She did end up trying to make the story about her, but the tweets were fake. But it turns out the words were real, take a look:

Damn, that quote was real, it just wasn't from Anita… pic.twitter.com/LloaOeq0Fa

Some will probably say, “No Ralph, what does the have to do with GamerGate?” But, oh well. I think showing the mindset of a nasty piece of work like this is valuable. This sort of thing can be pointed to when someone asks what our opponents are like. Can you imagine being so low as to say something like that? I write some mean stuff myself, but I have more decorum than to shit on someone the very night they died. We’ve see Jonathan McIntosh do the same thing in the past. This is common from the other side:

I’m gonna keep spotlighting these bastards, whether they’re journos, academics, public officials, or in gaming. It’s all part of the same fight, and we should stop acting like it isn’t. I realize most of you here agree, but let me know what you think down below.