With so much to write about today, I just had to go ahead and pick something. Since I was already talking about Shanley’s meltdown on Twitter, I figured why not start there. It really is pretty fun to see an abusive troll like her have to eat her own shit. She keeps claiming that the story is about her fucking weev, when that’s only the side note. The real juice of the piece, comes from her racist beliefs and racially charged language, her views on interracial couples, etc. It’s not about who she fucked. The point of the Milo’s article is, she’s a complete fucking hypocrite, who two or three years ago, was openly racist (and proud of it).

She’s yet to deny any of the charges, which is also notable. She keeps deflecting with attacks on the character of weev. I’m hopeful that at least a few people have been redpilled about her over the last few days. With the way she’s lashing out at fellow feminists, I think some allies have deserted her in her time of need (lol). Is there no honor among thieves?

Last night, even Gawker joined in on the fun with a post about Shanley on Valleywag. Apparently they don’t like this nut much, either. They basically did a recap of Milo’s brutal destruction. This didn’t please Shanley very much. Let’s go to the Twitter Tale of the Tape:

The egomaniac actually think’s Gawker is threatened by the new site she’s apparently about to start up. I seriously doubt that, Ms. Kane. Not that Gawker/Valleywag isn’t ripe for a challenge, but it won’t be coming from you. You’re more suited for a padded cell, than a media mogul’s chair: 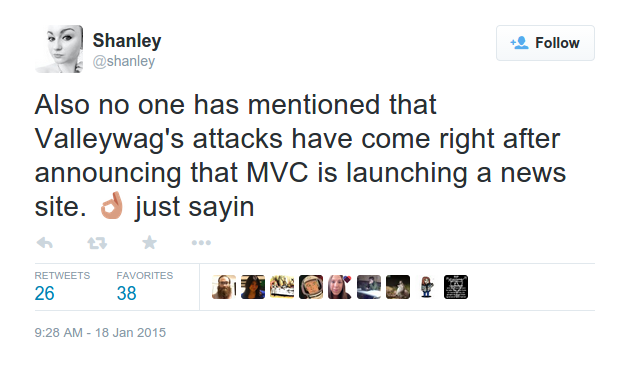 Watch as she wildly swings between blaming this all on Linux users, and GamerGate members:

There’s more. Here’s where she gets mad at feminists for not coming to the defense of a well-known racist and possible Neo Nazi sympathizer:

At a certain point, I had to join in this. It was pretty hard to resist, after I read the recap from Valleywag that I mentioned earlier. There’re the scum of the Internet, but it was still good to see them shine a light on Shithead Shanley: 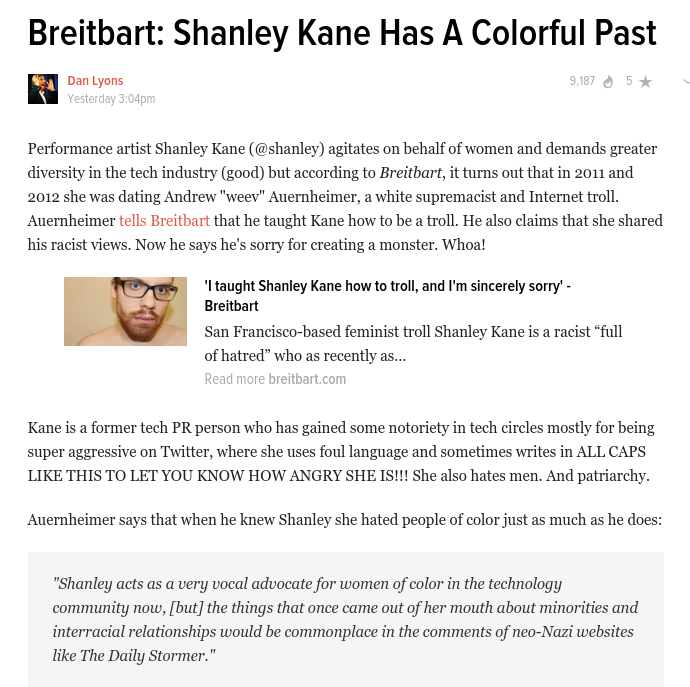 I tweeted that screencap out to Shanley, who had me unblocked for some reason, after having had me blocked previously (lol). Anyway, she wasn’t in the mood to re-read the Valleywag piece, apparently:

So, what’s the moral of the story here? Don’t fuck with well read British dudes that are known for fucking people up. Especially don’t do it if you are at the level of a Shanley Kane. The poor lass never had a chance. Gawker knew it as well, and like the rest of us, decided to have a good laugh. For once, I will tip my hat slightly towards the Cayman Criminal. I still think you should probably be in prison, but laughing at psycho Shanley is something that we can all agree on.

UPDATE: Milo has responded to Shanley’s Twitter outbursts with a few questions. Like him, I somehow doubt that she will be answering them. 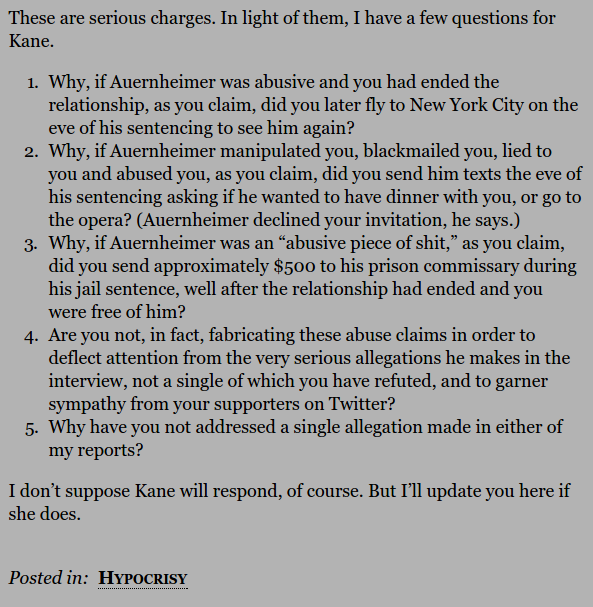