I read an editorial yesterday from this past weekend’s New York Times. I know, some of you probably hate The Times. They’ve disappointed me recently with their GamerGate reporting. But every once in awhile, they’ll surprise you. That’s what happened with this piece. Going in, I didn’t know it was written by the excellent Judith Shulevitz. If you’ll recall, she’s the woman who Jonathan Chait cited in his epic takedown of “PC culture.” If I had realized she was at the helm, I would have known the deal. This piece is a concise indictment of the rotten campus culture that been brought about by trigger warnings, safe spaces, and all the rest of that bullshit.

At the beginning of the article (archive), Shulevitz describes a debate last fall at Brown University. It was between Jessica Valenti and libertarian Wendy McElroy. One of the rad fems on campus caught wind of this, and knew that McElroy was likely to criticize the term “rape culture.” This alone was enough to prompt the young woman to action:

“Bringing in a speaker like that could serve to invalidate people’s experiences,” she told me. It could be “damaging.”

Ms. Byron and some fellow task force members secured a meeting with administrators. Not long after, Brown’s president, Christina H. Paxson, announced that the university would hold a simultaneous, competing talk to provide “research and facts” about “the role of culture in sexual assault.” Meanwhile, student volunteers put up posters advertising that a “safe space” would be available for anyone who found the debate too upsetting.

The safe space, Ms. Byron explained, was intended to give people who might find comments “troubling” or “triggering,” a place to recuperate. The room was equipped with cookies, coloring books, bubbles, Play-Doh, calming music, pillows, blankets and a video of frolicking puppies, as well as students and staff members trained to deal with trauma. Emma Hall, a junior, rape survivor and “sexual assault peer educator” who helped set up the room and worked in it during the debate, estimates that a couple of dozen people used it. At one point she went to the lecture hall — it was packed — but after a while, she had to return to the safe space. “I was feeling bombarded by a lot of viewpoints that really go against my dearly and closely held beliefs,” Ms. Hall said.

The mere act of hearing a dissenting view is now treated like something you almost need medical attention over. If you find this insane, you’re not alone. Almost everyone in the NY Times comment section did as well. This is the most liberal newspaper in the country, by most measures. It’s certainly the most liberal out of the major newspapers. If SJWs are losing the hearts and minds of The Times editorial board and its readers, where are the winning? Oh yes, in the rabid and nonsensical blogosphere that they’ve created for themselves. That’s about it, though. 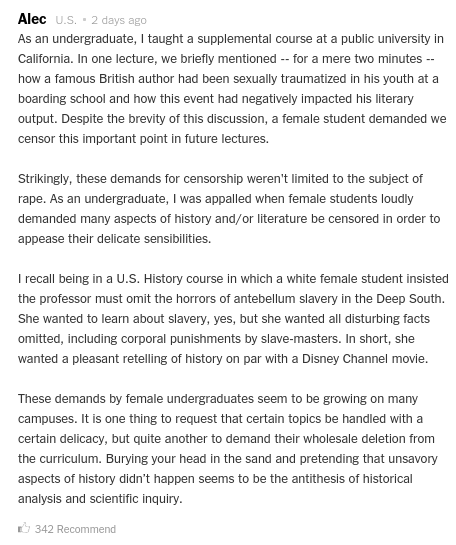 Shulevitz continues, further down in the story:

Feminist and anti-racist legal scholars argued that the First Amendment should not safeguard language that inflicted emotional injury through racist or sexist stigmatization. One scholar, Mari J. Matsuda, was particularly insistent that college students not be subjected to “the violence of the word” because many of them “are away from home for the first time and at a vulnerable stage of psychological development.” If they’re targeted and the university does nothing to help them, they will be “left to their own resources in coping with the damage wrought.” That might have, she wrote, “lifelong repercussions.”

“Lifelong repercussions” from hearing speech you don’t like in an educational setting? It’s not like people are standing and shouting epithets in people’s faces. Some students might be getting exposed to ideas they find nauseating. That happens to me literally everyday. It happens to most people everyday. That’s the point, and it’s why dumbass shit like this is leaving some delicate flowers unprepared to face life in the real world.

One last excerpt from the article (and a truly stunning anecdote):

A few weeks ago, Zineb El Rhazoui, a journalist at Charlie Hebdo, spoke at the University of Chicago, protected by the security guards she has traveled with since supporters of the Islamic State issued death threats against her. During the question-and-answer period, a Muslim student stood up to object to the newspaper’s apparent disrespect for Muslims and to express her dislike of the phrase “I am Charlie.”

Ms. El Rhazoui replied, somewhat irritably, “Being Charlie Hebdo means to die because of a drawing,” and not everyone has the guts to do that (although she didn’t use the word guts). She lives under constant threat, Ms. El Rhazoui said. The student answered that she felt threatened, too.

A few days later, a guest editorialist in the student newspaper took Ms. El Rhazoui to task. She had failed to ensure “that others felt safe enough to express dissenting opinions.” Ms. El Rhazoui’s “relative position of power,” the writer continued, had granted her a “free pass to make condescending attacks on a member of the university.” In a letter to the editor, the president and the vice president of the University of Chicago French Club, which had sponsored the talk, shot back, saying, “El Rhazoui is an immigrant, a woman, Arab, a human-rights activist who has known exile, and a journalist living in very real fear of death. She was invited to speak precisely because her right to do so is, quite literally, under threat.”

Shulevitz finished up with the same summation I would: these people are buried so deep in their own shelters that they have no idea what free and open discourse is all about. It’s genuinely scary when you hear Mari Matsuda and her ideas about stifling free speech. But I don’t need puppy videos, juice, and cookies to get me through it. I just grit my teeth and bear it…like every other rational person in this world. If only these Looney Tunes motherfuckers had any idea how batshit crazy they sound to everyone outside their hugbox, they might stop…but probably not.