EXCLUSIVE: Cornell University Tries to Intimidate Man Into Silence After He Reports Rape by Psycho Ex-Girlfriend

Every once in awhile, something comes along that a little bit outside my normal fare. This post isn’t a recap of some insane Twitter drama, although it did begin with a few tweets that TRR writer Nora Ralph saw last weekend. Here’s the main one, which pretty much went viral.

(We’ll get to the reason that tweet was deleted here in a second.)

This led Nora to reach out to the person who made these series of allegations, since campus craziness and injustice are regular topics of discussion on our site. As a result, she was given the email of the guy who was allegedly raped at the hands of Aaliyah Holliday, the woman mentioned in the tweet above. Note, we are withholding his name at his request, but his accounts and copious documentation will leave no doubt that the case is real…and disturbing.

Here’s the first account he sent to Mrs. Ralph…

I’m sorry to respond so late to this message.

Over the past week, I’ve just been dealing with backlash from the university over the tweet. I did not make the tweet and I was not aware that the person who made it was collecting my personal information.

The university still has not made any action to get Aaliyah removed from the school. Since making the tweet, Aaliyah’s mother has called my mother in attempts to make threats. The university has attempted to pressure me and my family into getting rid of our claim.

In terms of the tweet, everything on it is true. I got into a relationship with a girl, and when we first broke up in November, she or one of her friends came into my room and wrecked my heater, which caused a gas leak. We got back together and she began to hit me. Even though I’m a lot bigger than her, I was raised to believe that I shouldn’t hit a woman back, so I was pretty much powerless. I knew that if I reported it, then nothing would happen. Things kept building until one night on January 18, when I was completely drunk and she was dead sober, she performed oral sex on me twice even though I said “no” and attempted to mount me. On January 22, the day after my birthday, she punched me as hard as she could in the chest, and then tried to slam me into a wall, when I said that I would tell people what had happened. We finally broke up on February 3rd, but she continued to threaten me and harass me over the phone and over social media.

I ended up swallowing my pride and going to the university to file a report with Title IX. This was my first mistake. Title IX served her a no-contact order and filed a formal complaint against her on February 13. Shortly afterwards, she filed one against me with some pretty absurd, and made up charges. Title IX has to “investigate each claim equally,” which has ultimately resulted in her walking away completely free and me being subjected to numerous meetings.

Aaliyah called the Cornell University police, who don’t seem to be directly connected to the county police, on me. I have had to go to numerous meetings where no matter how much actual evidence I have, they continue to try to invalidate me. Yesterday, the police brought me in to try to force me to “confess” that I was the cause of the tweet and that I had fabricated my story. In addition, Cornell University’s statement entirely favors Aaliyah and doesn’t discuss the fact that I am the actual victim of violence here.

In addition, I got a no-harassment order against Aaliyah from the state of New York which prevents her from contacting me or my family. On the same day that I received this notice, Aaliyah contacted my mother to threaten her. When I told Cornell police about this violation, they did not do anything.

I’m in a position where I have a mountain of evidence, including a scar on my body, and the university is still taking her unsubstantiated word over mine.

Thank You for Your Time,
[Name Redacted]

So, here we have a guy who was allegedly raped at the hands of a psychopathic female, who then did the “right” thing and reported it to the Cornell powers-that-be only to see himself harassed by their thuggish police force in an attempt to get him into trouble. One has to wonder if the police were nudged in that direction by Cornell administrators, but you will have to judge for yourselves on that one. Needless to say, this is insanely unjust. That’s leaving aside the domestic violence part, or the harassment of his mother, or the threats he’s continued to receive from Ms. Aaliyah Holliday.

(As a side note, this woman is a disgrace to the legendary Aaliyah. RIP.)

This thing gets even wilder from here…and I have the screens to show prove it.

Let’s start with this one, which is why the tweet ended up getting deleted.

But if the university is so concerned about harassment, why haven’t they done anything to this nutter, who is on record repeatedly sending all kinds of brazen threats…even to witnesses to her criminality! 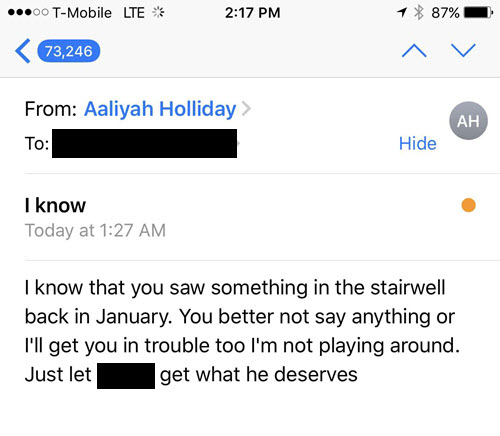 Oh, and she also has no issue with direct threats against her accuser. Imagine if this was a male and there was all this evidence. He would have been kicked out of Cornell immediately. Instead, this guy is getting harassed by the very people who are supposed to be there to protect him. 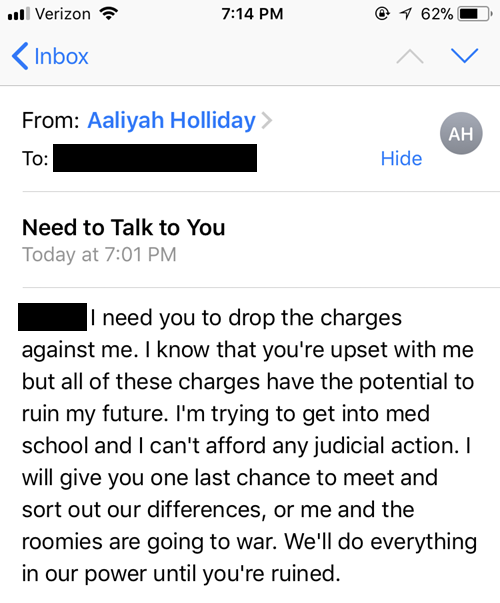 Oh, well, she’s trying to get into med school, you guys! Have sympathy for her!

She talks to people like she’s a Sicilian mob boss. The intimidation tactics never end with this witch. 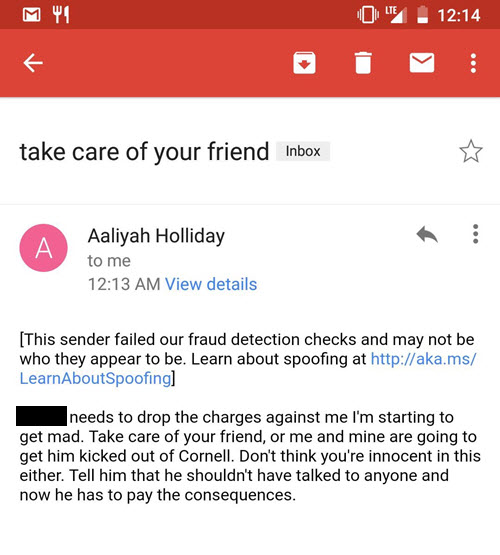 Normally, I’m not in favor of just kicking someone out of school. But this woman has been accused of rape, domestic violence, and is on record threatening both her accuser and his friends. How are the tables being turned against the accuser? I guess this is just another example of that great “male privilege” I always hear so much about.

It’s not like all this hasn’t been reported, either. Here’s a screen from a document the accuser sent to the Cornell University Judicial Administrator…

I’m not even sure we’re at the midway point, yet. There’s so much stuff that Holliday has done that it could be turned into a 3-part post. I want it all here in one entry, though. For posterity.

For example, this next bit is where she contacts the guy through some third party service and threatens to expose him as a homosexual. What’s her angle there, you might ask? Oh, she signed him up for a bunch of gay dating sites, naturally. If this doesn’t qualify as insanity, I don’t know what does. 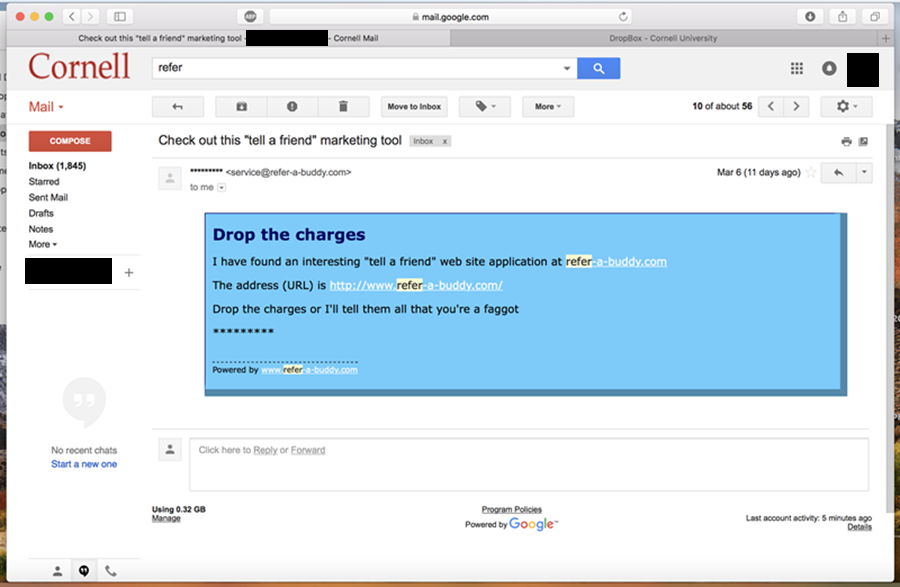 Did I mention that all this is being done despite there being an order of protection entered against Aaliyah Holliday? This woman has zero regard for any of that. She’s going to med school, after all! 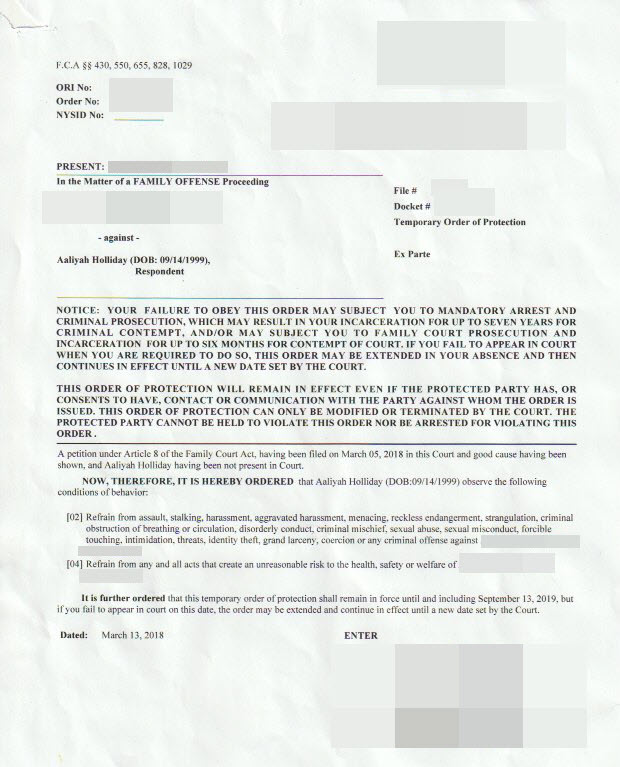 As I alluded to, all these documents were provided to me without any redactions. I am doing that for the benefit of the accuser. And even though I am usually of the mind that rape accusers should be named along with the accused (or that neither should be named, which would be the most preferred method), that’s not the state of play in this country. So, we’ll just go by the feminist rules on this one. Seems more than fair to me, especially in light of this she-devil’s documented behavior.

Ms. Holliday has no problem with going after this man’s family, either. I would legitimately be concerned for my personal safety if this dangerously unstable woman was after me. This dude might want to consider getting a concealed carry permit, if at all possible.

And here she goes again with the med school garbage… 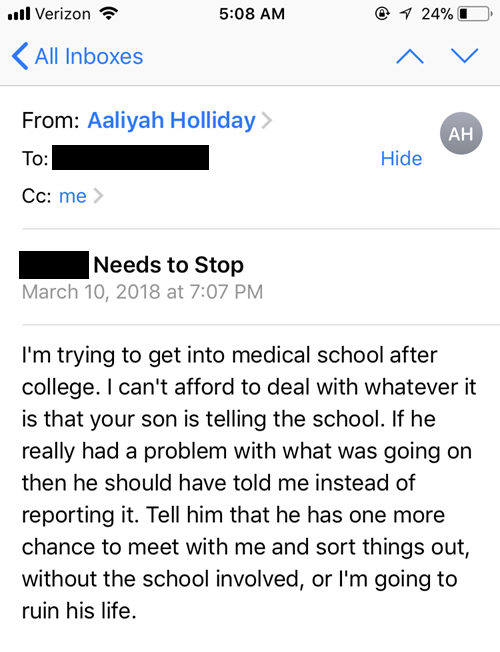 Normally, I would leave her email in the screenshot, but I don’t want this report to come back on the accuser. I’m just here to shed some light on this travesty, not get her email box flooded.

Speaking of the accuser, Nora has been in contact with him the last few days. He has more to add to this story…

I would prefer that my name wasn’t in any articles at this time, as I am trying to find a lawyer.

Other relevant information is that I was physically pushed from a party at the fraternity Zeta Psi on Friday night, and then I had a drink thrown on me from a moving vehicle which I believe was driven by people from that fraternity. The fraternity brothers are friends with my ex. I believe that it is another attempt to bully me into silence.

Thank You so much for your help.

Here’s the latest from him. It’s disheartening, to say the least…

Thank you so much for your help.

The meeting was very quick. The Title IX office just informed me that my ex was blaming me for the tweet. Once again Aaliyah Holliday is making false statements without any evidence. The good news is that the Title IX office still doesn’t have any evidence to use against me. Their only method now is dragging me into meetings repeatedly in an attempt to intimidate me.

At 5:38 pm, I got a call from the campus police, who I have learned are not the real police and don’t have the same powers. The officer on the phone, Officer Carpenter, tried to bring me in for a conversation because someone else had come forward reporting that I had been assaulted on campus. I told him that I wanted my lawyer to be present, and he promptly ended the call. The Cornell police aren’t the real police and I suspect that the only reason that they keep contacting me is because they want the story about Cornell’s inaction to go away.

I have a lot of respect for the real police and police officers. I am always cooperative with the police, and so I am upset that the Cornell police are trying to make my case disappear.

Trying to intimidate the man, of course. I wonder if the victim’s rights activists who complain about Title IX investigations that blame the victim will be up in arms about this one. Something tells me they won’t be, but I welcome possibly being proven wrong.

I hope to follow-up on this case very soon. Keep your eyes peeled for that.

UPDATE: Our good friend Janet Bloomfield, co-founder of the #Killstream, wrote up an excellent analysis of this story. You can read it here.

Technically, this isn’t rape. Rape must include penetration. If she shoved her fingers in his mouth or up his ass, it’s rape. The kind of sexual assault experienced most frequently by men is called ‘made to penetrate’, and it involves being made to penetrate her vaginally or orally. She sucked his d*** and tried to mount him? That’s two counts of made to penetrate.

Kind of neat how the feminist redefinition of rape excludes women sexing up reluctant men, isn’t it? The statistics look pretty bleak when made-to-penetrate is peeled out of the data. In actual fact, virtually identical numbers of men and women report sexual assault/rape.