What’s up guys? I’ve been kinda out of it today. Why? It’s Saturday, c’mon. Even your friendly local muckraker has to have a day off. But I’m back, and I have something delicious. Every once in awhile, I get handed an exclusive that really makes me smile. Today is one of those days. This one is even better, though, because it concerns our oldest friend here at TheRalphRetort.com, Leigh Alexander. It turns out she has some advice for young gaming journalists. It’s about what you would expect, coming from her…and I don’t think it was the liquor talking. It sounded more like her motto for life.

Here’s Emily Gera (formerly of Polygon) asking a question to her friends about the ethical quandary she faced in being a games journalist and working on an indie game simultaneously. That’s not a bad thing to ask. GamerGate turning up the heat has made everyone a lot more careful than they used to be. She sounded like she wanted to do the right thing. 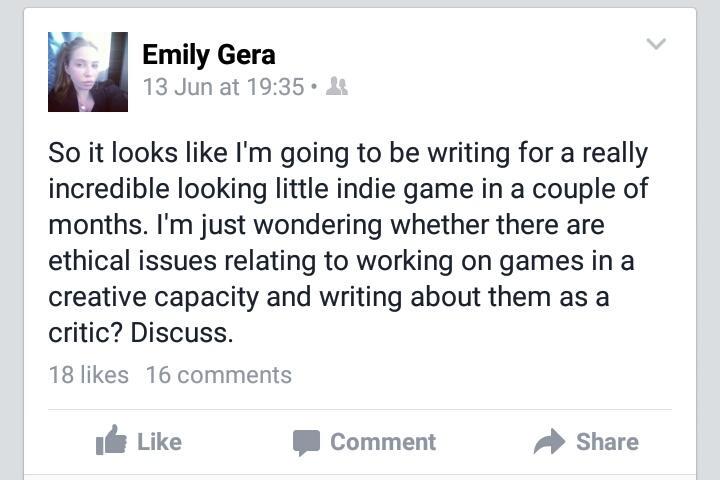 Leigh Alexander had some simple advice for Ms. Gera, though. It had nothing to do with the right thing, unfortunately:

By the way, that FIFA comment by Simon is fucking hilarious. Thank you sir. Leigh had a few more words of wisdom for the young journo, something about being a woman, blah blah blah. She’s been down this road a lot recently:

Very eloquent. I think the comments pretty much speak for themselves. They show an unethical hack with a severe persecution complex, who is now trying to spread that cancer on to the next wave of journos. We always knew Leigh was a total waste, but this is pretty bad. It’s also kinda funny too, let’s face it. I didn’t think she would be quite this stupid. But maybe I should have known. I said in the intro that it didn’t look like it was the liquor, but you never know with Leigh. She could have been about twenty rounds deep, at this point.

Let me know what you think about the new slogan of our opponents. I have an awesome reader sketch coming up. It’s one of the best we’ve had, so check it out shortly.