Earlier today, I was alerted to some comments that were made on Twitter by noted man-hater Mattie Brice. She’s always been quite open with her hate, actually, so I wasn’t very surprised to hear about this. Of course the radical feminists shield their disgusting hate-speech with the  “joke” designation, but if you read their rhetoric, you know that’s not true. What if I had made a tweet like this about African Americans? I doubt people would be so understanding:

Disgusting behavior. I'm glad a person like this is no longer involved with @igfnews. #GamerGate pic.twitter.com/wGQEg92tHP

She (@xMattieBrice) keeps complaining and begging for us not to call her out. This is why u get called out #GamerGate pic.twitter.com/hIoCqO0RI1

This is a women who hates gamers. She’s said it publicly. Not only that, she’s also said she quit the games industry. So, why was she involved in the Independent Games Festival in the first place? I can’t answer that question. But, it’s no longer a pressing issue, as she has resigned from her position as an IGF judge. Here’s both the comment that sparked her removal, as well as IGF’s response: 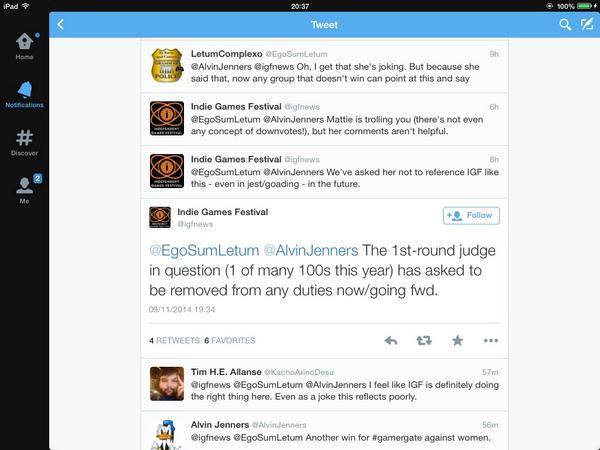 I was prepared to write a column calling on the IGF to ask her to step down, but she quit on her own. Seems like they pissed her off by asking her to stop sullying their brand. She’s such an entitled jerk, that she couldn’t accept any type of course correction. Well, as I said in my tweet below, good riddance to bad rubbish. She was never needed in the first place. She hates men, she hates gamers, and she’s a juvenile idiot. Nothing of value was lost.

So Mattie got pissed and quit when the @igfnews told her to stop sullying their brand? Good riddance to bad rubbish. #GamerGate

The IGF did the right thing today. I know it’s rare to hear any praise of them, but I guess we can give them a little. It’s also very possible that they really did can her on their own, but let her save face publicly by acting like it was her decision. This sort of thing happens all the time. In fact, I would put my money on this being the case. She’s a dangerous liability, at this point, and appears to be mentally unstable. Just take a look at some more of her recent rantings: 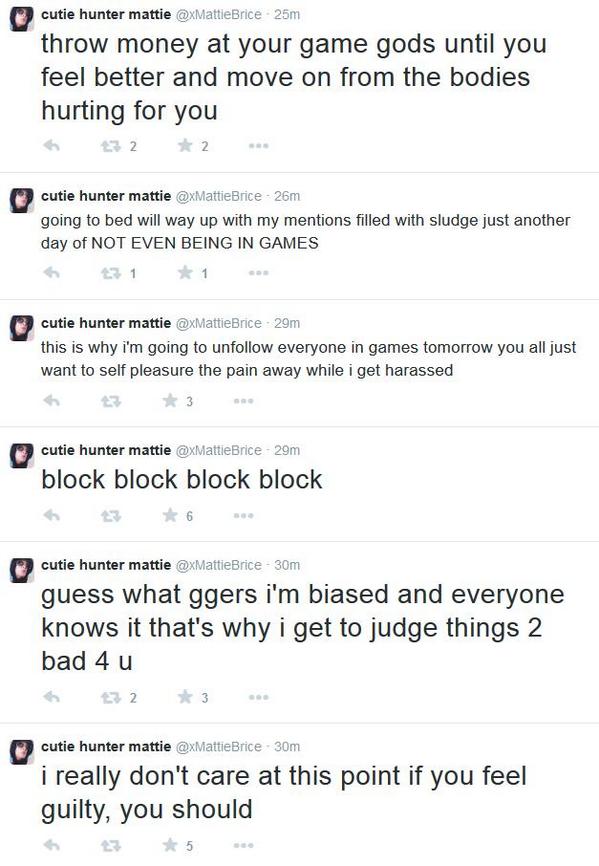 It’s no wonder the IGF cut ties with this fruitcake. Wouldn’t you? So, goodbye, Mattie. Maybe you actually will take your hate out of my pastime for good now. I won’t hold my breath, however. People like you always slither back in somehow. But, GamerGate will be watching. If you slip up again and openly spout your hate, expect to get rekt.

UPDATE: Looks like further evidence that she was forced out…

Well, looks like Mattie Brice DID get shitcanned. Here's a dedication for her. #GamerGate https://t.co/m1u4ekp8MI pic.twitter.com/pXK6Csn3NI

UPDATE 2: IGF are nothing but cowards…

UPDATE 3: Gamasutra involved? Not surprising, given their employment of Leigh Alexander.

Look at who's the media partner of @igfnews this year. Hate merchants @gamasutra. #GamerGate pic.twitter.com/lSNwiHTSfl

UPDATE 4: Even debasing your integrity with an apology for daring to stand up to hatred isn’t good enough for these people. They want total capitulation at all times:

Groveling at the feet of SJWs isn't good enough.