Fail King Geordie Tait Gives Us All A Laugh

Rarely do I see failures as big as Geordie Tait. If you’ve never heard of him, you can be forgiven. I’d never heard of the nutter myself, until GamerGate. Still, the guy isn’t exactly prominent. If not for his penchant for saying dumbass things, I would be ignorant of his existence. That might have been for the best, but I would have missed out on all the laughs he has provided.

Make no mistake: the guy is crazy. BUT, he’s soooo crazy, that it’s actually funny. For some odd, psychopathic reason, he’s fixated on sending all gamers to death camps. The story today deals with that, but this isn’t the first time he’s brought it up: 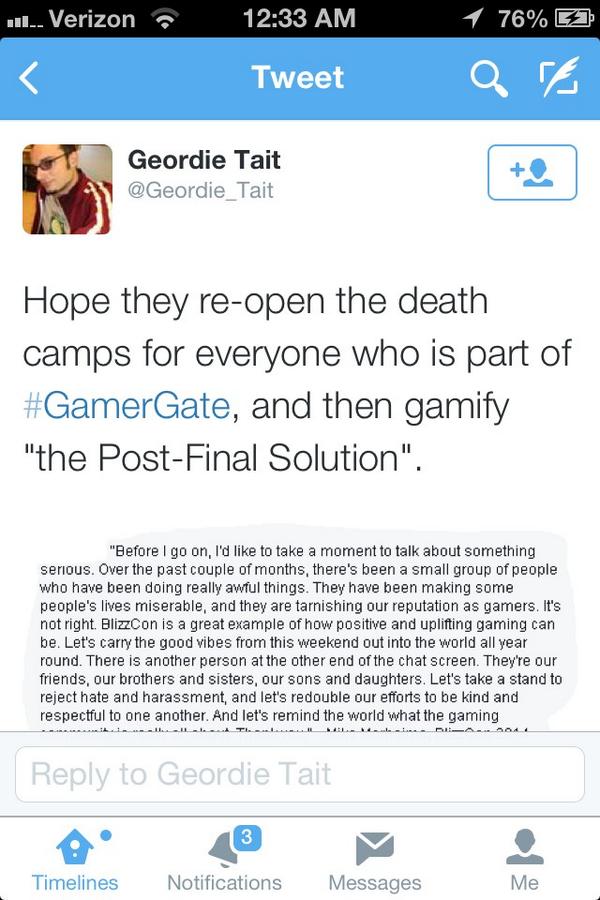 Most people, after they said something that offensive, would retract it. They would at least refrain from going down the same road again. But not Geordie! He doubles down on stupid every single time. But it’s not only the Holocaust that has given him some ideas. He seems to have cribbed from Al Capone as well: 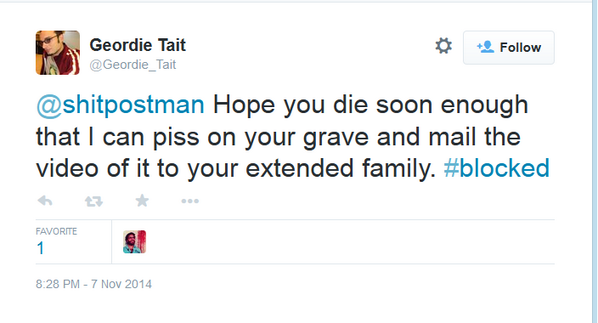 Seriously, this guy needs some real help…and I’m not joking. Even on my worst day, I’ve never advocated for SJW death camps. In fact, I’ve never advocated for any sort of violence at all. It’s just not in my nature. Hit them with nasty barbs? Yes, always. Hit them with poisonous gas? No. I can’t co-sign that. GamerGate doesn’t co-sign it, either. We don’t want the radical feminists to die…just lose. I wish we could say the same for Mr. Tait’s feelings about his adversaries. 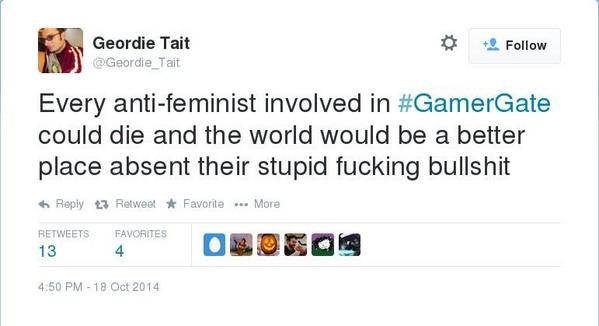 If this bastard wasn’t unhireable by this point, then I don’t know what to say. But, just in case he wasn’t fucked over enough, today, he posted an extremely long diatribe on Facebook, explaining his Final Gamer Solution. The reason he did, was because he thought his old site had censored his author page. It turns out, that was a massive miscalculation: 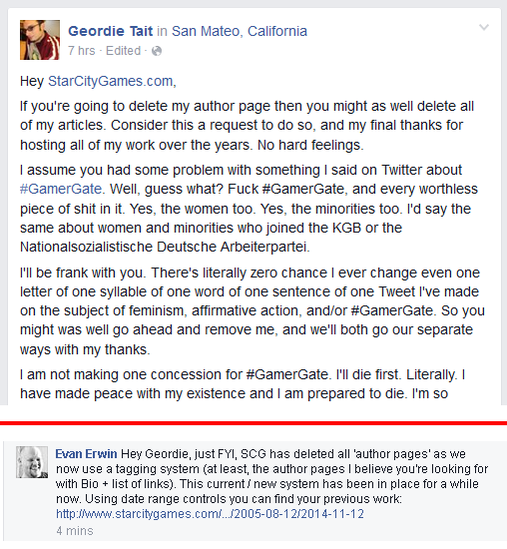 As you can see, the whole thing this idiot based his rant on, turns out to have not existed. I guess maybe he should have sent an email before posting this rant. Then again, this gut is so nuts, that he probably would have posted a gas chamber defense eventually anyway. If you read the entire piece, you can see that he really does believe this garbage.  I not sure whether that’s amusing , or scary, in the long run. But tonight, amusing definitely won out. Thank you Mr. Erwin. Also, thanks to Geordie Tait for going off his medication for a few years. This wouldn’t have been possible without both of you guys.

Geordie Tait, you are one of the dumbest SOBs I've seen in awhile. But I appreciate that fail, hardest I've laughed all month. #GamerGate

At the end of the day, this guy is a nobody. But you would be surprised how nobodies can affect the conversation. Tait has actually been cited on Wikipedia as a reliable source. While he doesn’t have much personal influence, SJWs use his work to advance their anti-freedom agenda. So, I felt like it was important to have an article to point to when discussing his unbelievable offensive track record. And, let’s be honest, this was just flat out fucking hilarious as well.

I look forward to seeing what the Based Comment Section has to say about it.

Thanks guys. I’m done for the day. I might have something put up early in the AM, so check back for that. Regardless, I will be back with a full slate of articles tomorrow.