There has been a lot of discussion about so-called “fake news” as of late. I don’t disagree that there is a lot of bullshit floating around on the internet. It’s also true that some of the false stuff you see can be traced to pro-Trump or right-wing websites. But there is plenty of it going around on the left as well. Yesterday, the a big story going around was a quote attributed to Ivanka Trump. How did it start circulating as fact?

A single tweet from a loony radical feminist, that’s how.

Never saw much reporting on Ivanka's response to Trump saying he wanted to date her: "If he wasn't my father, I would spray him with Mace." pic.twitter.com/RVlP4DdIc1

I’ve talked about this nutter here on the site before, but she’s not important enough to have her own tag. Regardless, enough mainstream media goons follow her account that this story got picked up…in a big way.

The only problem with this story is that it’s a complete and total lie. There is no evidence whatsoever that Ivanka Trump ever said this. In fact, it was a joke by Conan O’Brien on his late night show. 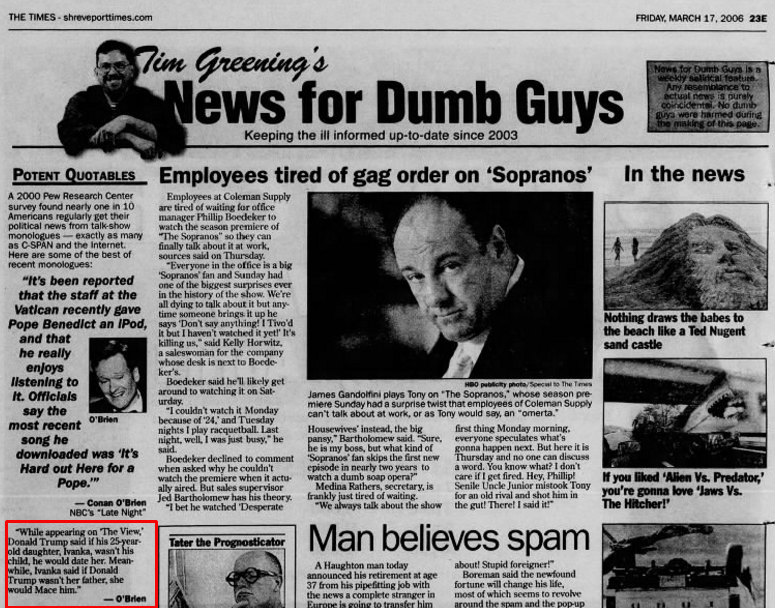 The credit for finding out what a hoax this was goes to Snopes, of all places. They’re usually concerned with trying to discredit stories that originate on the right, so I have to give them some credit for proving what a dishonest creep Ms. Kendzior is. The reason I call her a creep (and not just a radical feminist nutter) is because not only did she spread the original lie, she’s now refusing to take the obvious “L” and move on.

As @snopes says, it originated with Chicago Tribune and other papers, not me. They have no definitive evidence to contradict. pic.twitter.com/F3EyVDzOgP

This is what fake news looks like, ladies and gentlemen. It’s not something that is exclusively confined to the right or to pro-Trump sites. And even though there are lies on the internet, many of them in supposed news entries, I’m still not in favor of doing anything that would lead to censorship on social media. That’s what this whole effort is all about, people. The left wants to shutdown discourse and prevent stories they don’t like from getting traction. There is a small percentage of so-called fake news, but this is really about squashing the reach of ideological opponents. Just take a look at the list of “fake” sites that’s going around and you can see what this is really all about.