Father of the Year

The Killstream has been the biggest and most successful thing I’ve ever done online, but it wasn’t my first “known” venture. You’re on that one right now. I feel bad about letting this place stay dormant these past couple months, but the show and my rocky personal life has taken up most of my time. That situation is what brings me here in the first place, actually. Whenever I’m really feeling like shit or just want to vent, I start typing. Because even after almost 700 Killstreams, the written word is how I really express my thoughts. It’s cathartic for me.

Matthew Vickers and his wife Ariana have spent the better part of the last two months spreading baseless claims and accusations about me online in retaliation for me dating their daughter, Faith. Instead of, you know, actually giving a fuck about Faith, they have waged a campaign of public destruction against me and my show. Since I am literally known for being an asshole and arguably a piece of shit, it hasn’t really had all that much of an effect on the Killstream itself. But, I would be lying to you if I said it hasn’t had an effect on her and I.

To make a long story short, their daughter has chosen to live with me and they simply cannot handle it. She’s pregnant with my child, and they can’t accept it. Despite Faith herself publicly asking them to stop with their provocations, they refuse. They’re sick people and seem to be enjoying this whole thing. The cretinous sperg who calls himself a father is now plotting to write a book about this whole affair. I guess that will make up for the shitty screenplays he’s been writing all these years. Like 99.9% of the population, you have probably never read a Matthew Vickers screenplay. But now he has me to write about. People finally care about his words. The e-fame is within reach!

This piece of trash doesn’t give a single fuck about his daughter. Who writes stuff like this to their kid? Certainly not a level-headed and caring individual, that’s for sure. Oh, and in public he tries to portray her as mentally ill…but in private he sends nasty letters dripping with scorn and derision. He’s a phony, plain and simple. 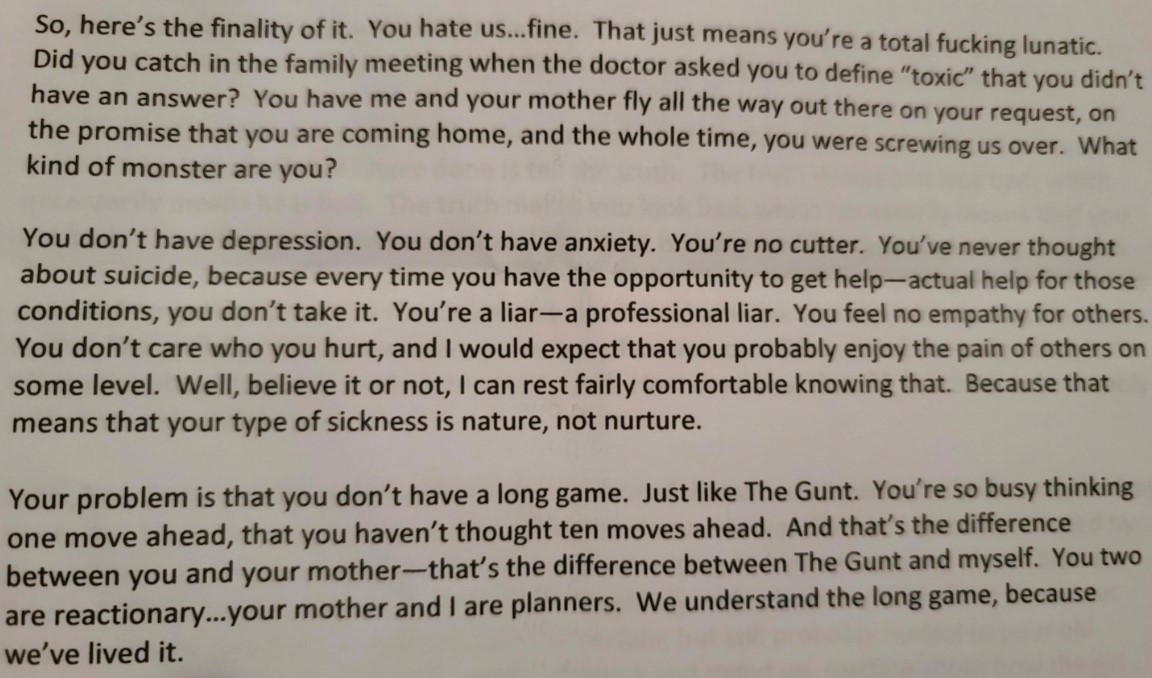 And this is apparently what he wants, by the way. More dirty laundry, more back and forth allegations. It feeds it all, which I’m well aware of. Monitoring situations like this is actually my job and has been for a long time. But, at a certain point, what can you do?

I don’t think I’ll have anything to add going forward, though. Faith is pregnant and they are apparently determined to fuck with us the whole way through. Still, I thought it would be good to throw a little light on the vindictive Vickers duo for a change. Faith and I have cut all contact with them now, but who knows what they have in store? Maybe Fatt Matt has a musical he wants to make about the whole affair? OR, he could crowdfund an indie game! Maybe open up a Patreon or some shit and print up merch (he’s already mentioned that, btw). The options are limitless for a scumbag like him.

Imagine trying to fucking grift off the back of your own daughter’s tragedy. Is there’s a lower form of human, besides pedophiles? I certainly can’t think of any off the top of my head. But that’s the reality for Mr. Vickers. I know I make a lot of noise about “going low,” but this fucker has taken the proverbial cake and scarfed it down whole in one sitting.

This has been my life the last two months. Oh, I mustn’t forget the people taking potshots from every direction imaginable. Every opportunistic, no-talent hack you can think of has come out and tried to prop themselves up off my situation and the Vickers’ lies. Supposed friends have taken shots, randoms in my mentions with this nonsense on the daily…I would be lying to you if I said it was fun. It’s tiring and it’s meant to be. They hope to wear me down. And if I wasn’t such a spiteful son-of-a-bitch, they probably already would have. Their hate, while annoying and sometimes even detrimental, is also my fuel.

By god you motherfuckers, I now have a full fucking tank…and it’s about time to hit the open road.

TRR STAFF We interrupt your regularly scheduled infighting to report the following…
“Ransomware? In our Lol Firm?” Ransomware deployed A law firm, Grubman…