I’m about to go out to eat with Nora, then we’re going to hit up the bowling alley. Luckily for her, I absolutely suck at bowling. Still, I’m hoping for a big win tonight. Before I left, I wanted to come and write-up at least one full story. It concerns our old friend Anita Sarkeesian and her possible violation of charity law through her advocacy of Hillary Clinton’s campaign for president.

Now, the thing is, there’s nothing wrong with Anita herself promoting Hillary. But her use of the official Feminist Frequency Twitter account to promote Clinton might be another story altogether. Someone sent me this information in a email last night: 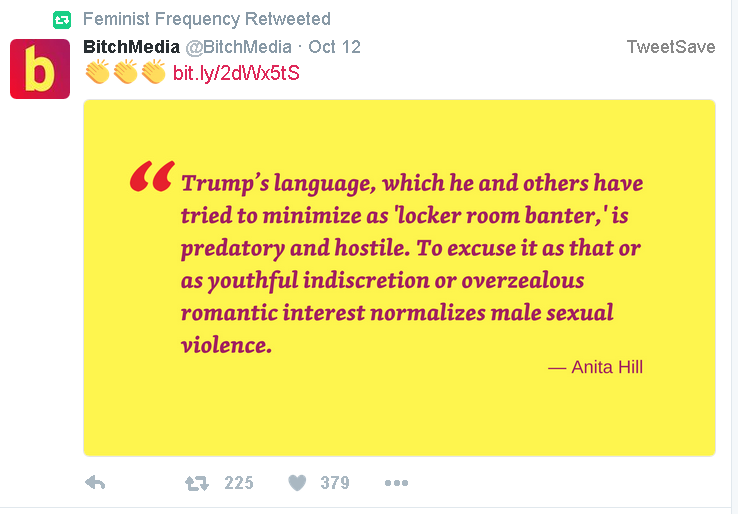 And the rule itself… 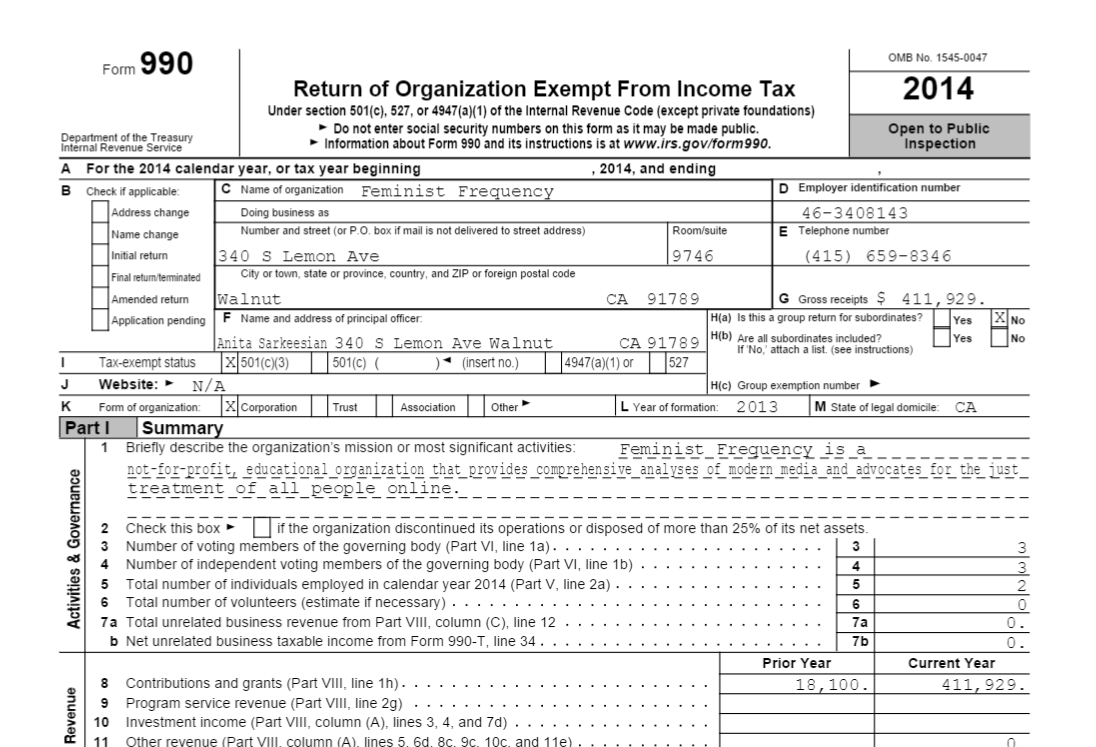 Here’s a good summary of this issue, sent to me in the same email (it’s actually a summary of the complaint this anon filed against Feminist Frequency, by the way):

The individual “Donald J. Trump” announced his candidacy for president of the United States in June of 2015.

Feminist Frequency has received exemption from income tax and currently operates as a tax-exempt public charity organization: As of October 1st, 2016 Feminist Frequency is listed as an active business entity incorporated in the State of California.

Feminist Frequency has an Employment Identification Number (EIN) of: 46-3408143 as stated in the IRS Form 990 (“Return of Organization Exempt From Income Tax”) for the 2014 taxable year provided by Feminist Frequency

As of October 19th, 2016, the Internal Revenue Service’s “Exempt Organization Select Check Search Tool” shows that an organization with a matching name and EIN is listed as a Public Charity organization eligible to receive tax-deductible charitable contributions.

URL, URLs “A URL (Uniform Resource Locator) is a web address that points to a unique page on the internet.”

Twitter is “An information network made up of 140-character messages (including photos, videos and links) from all over the world.”

Verification is “A process whereby a Twitter account receives a blue check icon to indicate that the creator of these Tweets is a legitimate source. Verified users include public figures and those who may have experienced identity confusion on Twitter.”

Profile “Your profile displays information you choose to share publicly, as well as all of the Tweets you’ve posted. Your profile along with your @username identify you on Twitter.”

@username “A username is how you’re identified on Twitter, and is always preceded immediately by the @ symbol. For instance, Katy Perry is @katyperry.”

Follower “A follower is another Twitter user who has followed you to receive your Tweets in their Home stream.”

protected Tweets “Tweets are public by default. Choosing to protect your Tweets means that your Tweets will only be seen by your followers.”

Retweet (n.), RT “A Tweet that you forward to your followers is known as a Retweet. Often used to pass along news or other valuable discoveries on Twitter, Retweets always retain original attribution.”

Retweet (v.) “The act of sharing another user’s Tweet to all of your followers by clicking on the Retweet button.”

Timeline “A timeline is a real-time stream of Tweets. Your Home stream, for instance, is where you see all the Tweets shared by your friends and other people you follow.”

Feminist Frequency uses the internet as a significant part of its activities: From the Feminist Frequency Form 990 Part I “Summary”, item 1 “Feminist Frequency is a not- for-profit, educational organization that provides comprehensive analyses of modern media and advocates for the just treatment of all people online.”

The Feminist Frequency organization currently operates a public, verified account on the Twitter service (http://www.twitter.com), under the username @femfreq.

The Feminist Frequency profile is viewable at http://www.twitter.com/femfreq.

Tweets originating from or distributed by @femfreq will contain the URL: http://www.twitter.com/femfreq/status/[series of numbers identifying the tweet]

Bitch Media and Feminist Frequency did publish and/or distribute a statement over the internet. On or around October 12th, 2016 the public, verified twitter account “@BitchMedia” operated by a separate not-for-profit entity “Bitch Media” (URL: http://www.twitter.com/BitchMedia) did publically publish and distribute a written and pictorial statement at the following URL: https://twitter.com/BitchMedia/status/786242329833111552. (the “statement”)

The written text portion of the statement is as follows “ http://bit.ly/2dWx5tS”

This URL is referred to as a “shortened link” reducing the amount of characters needed to refer to a specific URL. In this case the shortened link redirects a web browser to the following URL: https://bitchmedia.org/article/our-radar—feminist-news-roundup/anything-jay-z-can-do-i-can-do. Titled “Feminist News Roundup”

The pictorial portion of the statement contains the text:

“Trump’s language, which he and others have tried to minimize as ‘locker room banter,’ is predatory and hostile. To excuse it as that or as youthful indiscretion or overzealous romantic interest normalizes male sexual violence. – Anita Hill

On the “Feminist New Roundup” The first URL on the webpage displays the text “Anita Hill wrote an op-ed on Donald Trump and sexual harassment”, which links to the following Boston Globe article: http://www.bostonglobe.com/opinion/2016/10/10/what-can-still-learn-from- sexual-harassment/jCF5rxYbFMgE3bOKR984pI/story.html “What we can still learn from sexual harassment”

Subsequent to the @BitchMedia statement, @femfreq did publish and/or distribute the same statement as @BitchMedia, by retweeting @BitchMedia at the following URL: https://twitter.com/femfreq/status/786368250619699200.

The webpage http://www.archive.is/ describes itself as “Archive.is is a time capsule for web pages! It takes a ‘snapshot’ of a webpage that will always be online even if the original page

disappears. It saves a text and a graphical copy of the page for better accuracy and provides a short and reliable link to an unalterable record of any web page”

@femfreq did publish and/or distribute the same statement

The statement published and distributed by Bitch Media and Feminist Frequency is in violation of the prohibition against political campaign intervention as stated in 26 U.S. Code §501(c) 26 U.S. Code §501(c)3 “Exemption from tax on corporations, certain trusts, etc.” states:

Corporations, and any community chest, fund, or foundation, organized and operated exclusively for religious, charitable, scientific, testing for public safety, literary, or educational purposes… and which does not participate in, or intervene in (including the publishing or distributing of statements), any political campaign on behalf of (or in opposition to) any candidate for public office.

Rev. Rul. 2007-41 provides the following guidance for determining whether an organization is engaging in issue advocacy vs political campaign intervention:

Section 501(c)(3) organizations may take positions on public policy issues, including issues that divide candidates in an election for public office. However, section 501(c)(3) organizations must avoid any issue advocacy that functions as political campaign intervention. Even if a statement does not expressly tell an audience to vote for or against a specific candidate, an organization delivering the statement is at risk of violating the political campaign intervention prohibition if there is any message favoring or opposing a candidate. A statement can identify a candidate not only by stating the candidate’s name but also by other means such as showing a picture of the candidate, referring to political party affiliations, or other distinctive features of a candidate’s platform or biography. All the facts and circumstances need to be considered to determine if the advocacy is political campaign intervention.

Key factors in determining whether a communication results in political campaign intervention include the following:

. This shows that @BitchMedia and

A communication is particularly at risk of political campaign intervention when it makes reference to candidates or voting in a specific upcoming election. Nevertheless, the communication must still be considered in context before arriving at any conclusions.

I’ll be following up on this topic very soon. For now, the bowling alley is calling my name.