Another day, another bogus claim against GamerGate. This time, it’s from Anita Sarkeesian’s boyfriend, and man-behind-the-curtain, Jonathan McIntosh. This guy has been comedy gold throughout the last couple months, but today he decided he wanted to get in on the false accusation game. He and Anita are experts at using Twitter to stoke up some bullshit, so it could just be another Feminist Frequency promotion. All just another day at the office for Mr. McIntosh.

There’s a tweet up on his feed right now, that talks about his father getting harassed in a phone call. If this is true, it’s deplorable, and we condemn it. But, I don’t see why you wouldn’t simply call the police, rather than report it on Twitter. Or, if you did talk about it, perhaps wait a couple days? It just seems like blatant self-promotion. Before I learned of the original tweet, I sent out a message to McIntosh:

Deleted tweet from @radicalbytes. Did you call the authorities before sending out a Twitter advisory, Jon? #GamerGate pic.twitter.com/7MkptJbwbt

I had been told the tweet was deleted, and it actually had been. But I was thinking about a different tweet. The one that had actually been deleted, accused GamerGate of being directly responsible for the threat. This, despite having zero evidence. Of course, since you’re on this site, chances are you know that is nothing new. Here’s the original tweet: 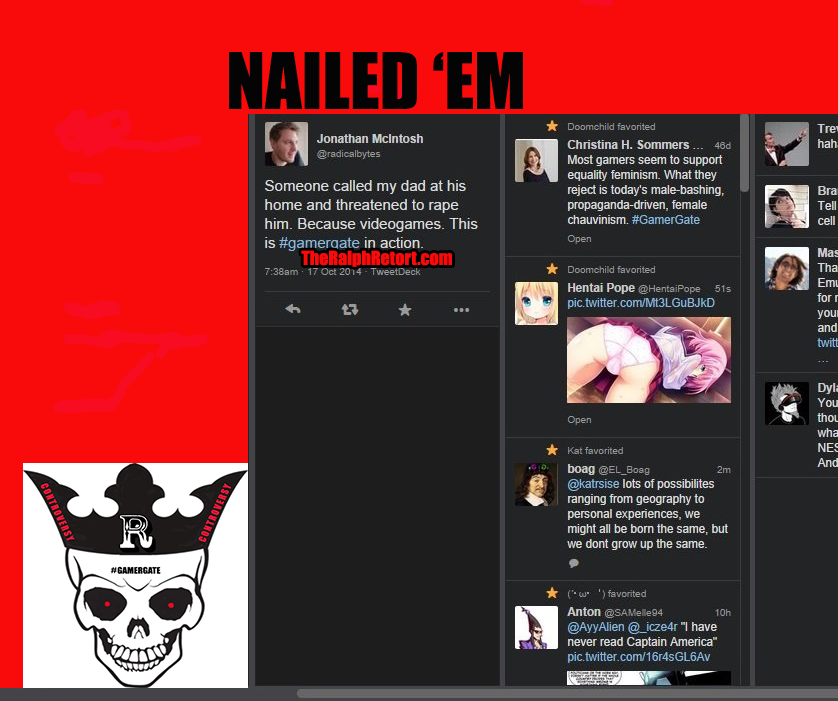 What makes these people hurl so many hurtful and damaging accusations? I have nothing but love for the elderly. I don’t support dropping rape threats. I’ve repeatedly condemned harassment. But, I’m #GamerGate. So, I guess none of that matters. I’m just subhuman scum. As we saw this morning, nothing is too extreme for these radical feminists. They will use whatever foul tool they have at their disposal.

Our tool, is exposure. Good thing it beats all the rest.