The Fine Brothers are teaching a course in how to piss off the entire internet.
Total
0
Shares
Share 0
Tweet 0
Pin it 0

I’m not a very big YouTube scholar. Still, you would have to be living under a rock in order to have not heard about the latest controversy. The Fine Brothers, a duo who make “react” videos about everything under the sun, have recently came under fire for trying to trademark the entire format. If this sounds utterly ridiculous, that’s because it is. How in the world do they think they have the right to do this? It’s not like they invented this genre, as it’s been going on for years. The two claim all this was done to “help creators,” but it seems like it was meant to help their bank accounts instead. After catching heat for a couple days, they put out an explanation video. It has went over about as well as one would expect:

So the Fine bros trademarked the word REACT in the context of internet videos… pic.twitter.com/7AVkfQ8EXF

Kids React To: TheFineBros Lose Over One Million Subscribers pic.twitter.com/DvxvHQV7Bb

They’ve already lost at least 100,000 subscribers, and that number seems poised to grow. There’s currently a live stream up that’s dedicated to watching their falling count. It currently has around 4,500 viewers, and it’s 4:06 AM on the East Coast. I’m told it had over 6,000 viewers at one point. Since I’ve been up, I’ve personally seen them lose around 7,000 subs.

All this is made even more funny by the fact that had they just kept their mouths shut for another month or so, their trademark likely would have went through uncontested. That’s no longer the case:

When a trademark examiner approves a trademark, like they did here, they put it forward for publication. On the date of publication, the public has 30 days to file an opposition. Had the Fine Bros kept quiet for another month, they almost certainly would have gotten this trademark, as no one seemed to notice it. Instead, they announced their ridiculous licensing program and turned all eyes on them. How they were not advised to remain silent a bit longer? No idea. But I can tell you that it was a huge mistake, and one that they will regret. Not only are they experiencing a terrible PR disaster right now, I am also assisting a large group of streamers and content creators in an opposition, pro bono (that means free), because I’m extra pissed about this one…

I’ve seen a lot of people arguing that this is just them protecting their brand, and that they would never go around bullying people. We’ve seen that’s blatantly false as they have issued a plethora of C&D’s (if the reddit users claiming to have received ones are to be believed, which I think they are), and have even sent their fans to brigade programs like “Ellen” for doing a similar reaction bit. I watched Kids Say the Darndest Things. These guys didn’t come up with the idea of filming funny reactions from kids. And they certainly don’t own an entire genre of YouTube videos. It wasn’t their idea, and it’s not theirs to own or police. 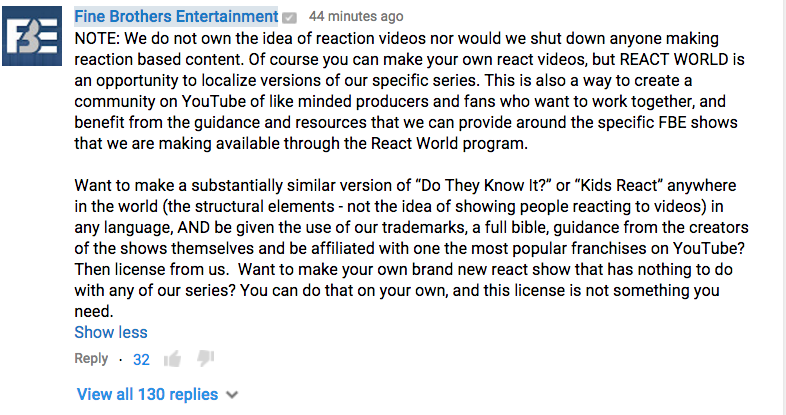 This seems a little laughable, given the fact that they sicced their fanbase on Ellen DeGeneres for doing a react-style video awhile back…

They still have 13 million+ subscribers, so I think with a huge apology and a promise to never, ever, ever, try something like this again, most people would be willing to forgive them, but damn. This is a major PR disaster and it’s going to take awhile to dig out of it. Even then, people are going to be making jokes for the rest of eternity. My unsolicited advice would be to do that apology ASAP, scrap the program, and fire whoever came up with this dumbass idea. If it was the brothers themselves, then perhaps some self-flagellation is in order.