This glorious Monday just got better. Not only is Zoe Quinn whining about being further exposed as a liar and a cheat. We’ve now received word (OK, it was a couple hours ago, but I had to have fun on Twitter and run an errand) from Big Randi Harper herself that she’s been shitcanned from KIXEYE. This is totally unrelated to her many acts of scandalous behavior, I’m sure. It’s just a little “reorganization” according to Randi. Forgive me if I don’t shed too many tears for Shamu here. She declared war on us. Fuck her. I hope she stays unemployed for a decade. I’m sure some ignorant SJW outfit will give her a salary eventually, though. Even so, today is pretty fucking sweet.

Whenever a waste of space like Randi has to eat the shit she shovels out so often, it’s a great fucking day for America, and the world at-large. Let’s take a moment to sit back with our favorite intoxicants, and memorialized the day we saw this numbskull get fired. Let’s also hope that she’s not the last one of these SJWs to get shown the door.

@TheRalphRetort Beware #gamergate, more poorly coded scripts which somehow get endorsed by the @igda are coming

Because the day I’ll truly celebrate, is the one where Leigh Alexander, Ben Kuchera, Ian Miles Cheong, among others, are run out of gaming “journalism”. Randi Harper is just a fat troll. It’s hilarious to see her get curb-stomped, and I’m sure we’ll cover her again. But true victory is when these journos no longer threaten the content of our games. The fight continues until then. I know I can’t be the only one who feel re-energized by the events of the last week or so. It feels like we’re picking up steam. The Intel thing was actually a net benefit, so I want to thank them for rousing the base. 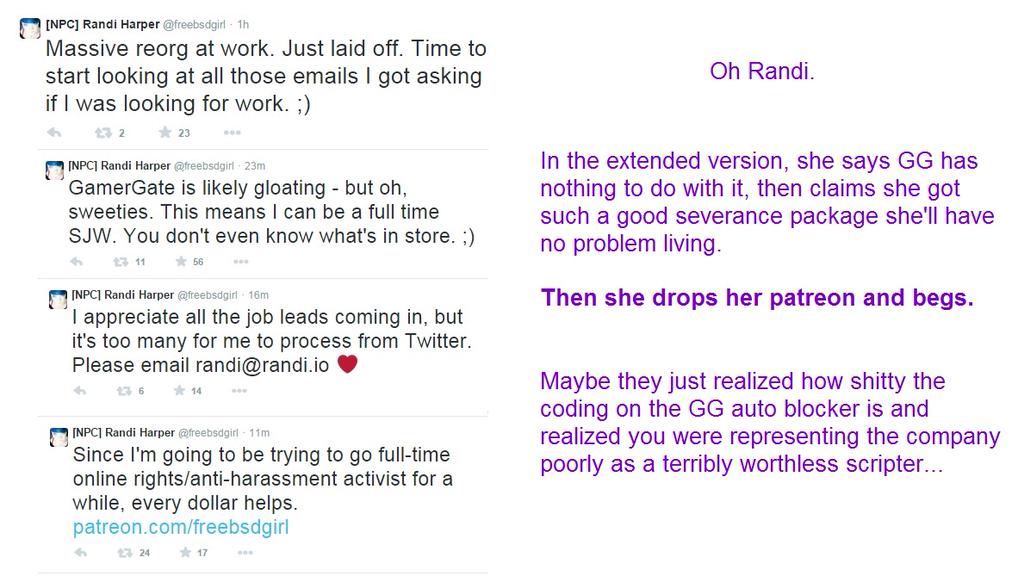