First off, I want to thank Mrs. Nora Ralph for her post this morning. It has certainly made the rounds thanks to all you guys, as well as my good friend Zidan over on Twitter. He started the fire that caused Joe Rogan to retweet the post. 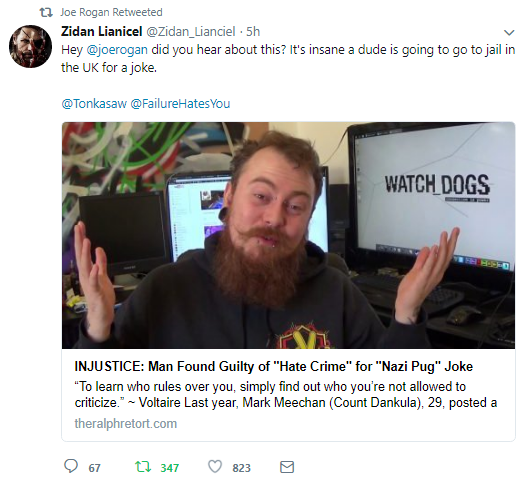 But not only did he retweet it, he actually had my site pulled up on his stream when he discussed the story. Needless to say, I’m pretty happy with that turn of events, although I wish it didn’t come as a result of this fucked up situation.

By the way, there’s a little nugget that someone sent me on Discord earlier that adds some irony to the Count Dankula story. Take a look at this BBC News post from several years back. As it turns out, actual Nazis went after a Finnish man for something eerily similar…

A Finnish dog which gave Nazi salutes so annoyed Germany’s World War II government that it launched a campaign against its owner.

Tor Borg’s wife had reportedly given Jackie the nickname Hitler – saying the dog’s strange way of raising its paw and barking reminded her of the Fuhrer.

Newly discovered documents show Mr Borg was interrogated by the Germans on suspicion of insulting Hitler.

Attempts were also made to sabotage his business, the papers show.

Researchers at the German Foreign Office uncovered a cache of documents and diplomatic cables concerning Jackie.

In one exchange, dated 29 January 1941, German Vice Consul Willy Erkelenz in Helsinki wrote that “a witness, who does not want to be named, said he saw and heard how Borg’s dog reacted to the command ‘Hitler’ by raising its paw”.

Mr Borg was called into the German embassy for questioning, where he admitted that his wife Josephine – a known anti-Nazi German – had called the dog Hitler, but denied being involved in anything “that could be seen as an insult against the German Reich”.

The embassy, however, thought otherwise, telling officials in Berlin: “Borg, even though he claims otherwise, is not telling the truth.”

The Foreign Office spent three months investigating ways of bringing Mr Borg to trial for insulting Hitler, but no witnesses would come forward, the newspaper reports.

An attempt was also made to get suppliers to Mr Borg’s pharmaceutical firm – including IG Farben – to stop dealing with him.

But in March 1941, the Chancellory decided that “considering that the circumstances could not be solved completely, it is not necessary to press charges”. It was unclear whether Adolf Hitler had been involved in the saga himself.

So, even the REAL NAZIS decided against charging a man that had a Hitler-saluting dog. I think that says a lot about the current state of play in the United Kingdom.