If you’ve been following the Seth Rich saga, then you know things heated up a bit this week after some alleged revelations from a private investigator hired by the family. Regardless of where you fall, whether you think he was murdered during an attempted robbery, like the official version goes, or whether you think he was gunned down by forces who wanted to see him killed because he was leaking against Hillary Clinton and the Democrats, I think we can all agree that making light of his murder is not a smart play. This is especially true if you’re one of his former colleagues, like Andrew Therriault. Mr. Therriault works as the “chief data officer” for the City of Boston, but before that, he was a DNC lackey.

Now, he’s making light of the murder, or at least the people who continue to seek answers. Again, even if you don’t believe the murder was the result of political plotting, wouldn’t you want to see the person who killed Seth Rich be brought to justice? In my mind, simply keeping the story alive makes it more likely that we will eventually see that happen. 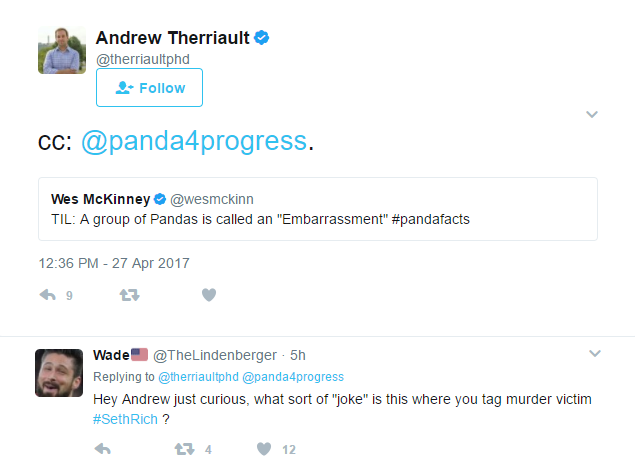 Again, I’ve spent days saying people should be able to mock freely, even in the case of tragedies. But this one strikes me as pretty dumb, not matter where the mockery was truly aimed.