I know this story is a couple days old, but I’ve been meaning to sit down and bang out a few hundred words on it. In case you’ve been living under a rock, here’s what happened. Rose McGowan, who hasn’t been relevant since my teenage years, made a big stink over Jennifer Lawrence’s Mystique getting choked out by supervillain Apocalypse in the ads for the new X-Men movie, appropriately titled X-Men: Apocalypse. I will never understand how anyone could have a problem with a bad guy in a movie choking out a female. He’s not a good dude, that’s the whole point of showing him choking out his female foe. Is Rose McGowan really this stupid?

I doubt it. I think she’s just using this to try to resurrect her moribund career…

“There is a major problem when the men and women at 20th Century Fox think casual violence against women is the way to market a film. There is no context in the ad, just a woman getting strangled. The fact that no one flagged this is offensive and frankly, stupid. The geniuses behind this, and I use that term lightly, need to to take a long hard look at the mirror and see how they are contributing to society. Imagine if it were a black man being strangled by a white man, or a gay male being strangled by a hetero? The outcry would be enormous. So let’s right this wrong. 20th Century Fox, since you can’t manage to put any women directors on your slate for the next two years, how about you at least replace your ad?”

This reads like someone who is extremely bitter about having a career that has been circling the drains for over a decade. Maybe if you hadn’t fucked up your face to the point that no one can even recognize you, then you’d still be getting roles. Also, she says there’s no context to the ad, but yes, there’s plenty of context.

It says right there in the corner: ONLY THE STRONG WILL SURVIVE… 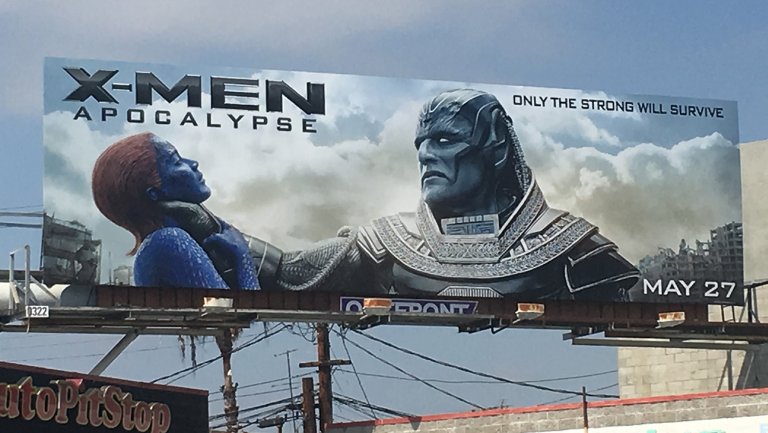 The real tragedy in all this is that 20th Century Fox ended up listening to this idiot instead of ignoring her like all decent casting agents have been doing for years.

“In our enthusiasm to show the villainy of the character Apocalypse, we didn’t immediately recognize the upsetting connotation of this image in print form. Once we realized how insensitive it was, we quickly took steps to remove those materials. We apologize for our actions and would never condone violence against women.“

Why on earth would you cave to this nobody? Because she riled up some nuts on social media? That’s not your audience, you idiots. I realize that you just wanted to make this go away, but this hands a victory to outrage merchants like McGowan, who will be sure to come for your ass again just as sure as I’m sitting here writing this column. It compromises art and it’s unconscionable that you caved to this has-been. To be frank, she never really was, either. McGowan wasn’t known for having any real talent. She was a pretty face…before she fucked it up.

Send her to the trash heap were she belongs and move on with real business.