You have to hand it to Feminist Frequency’s (Fem Freq) Jonathan McIntosh. I never thought he would be so dishonest as to try to get out of his recent public positions by saying it was all an elaborate troll. He didn’t quite say that explicitly a couple nights ago, but when I parsed the language, that’s the impression I got. In reality, I think he’s full of horseshit. I don’t believe for one second that he’s been trolling us. The more likely story, is that he’s been catching heat from some business partners (*cough* Intel), and is using this as a way to try and cover up for his recent support of the terrorists who struck out at Charlie Hebdo earlier this month (among other things). The only problem is, he has a lifetime of extremism to account for. What’s his excuse there? Has he been trolling for 14 years?

I guess it’s possible, but I think the evidence points to him being a liar on the scale of his con-artist partner-in-crime, Anita Sarkeesian. You’ve seen the evidence, here, and elsewhere. I’m not the only one who isn’t buying it (McIntosh’s claims are listed first): 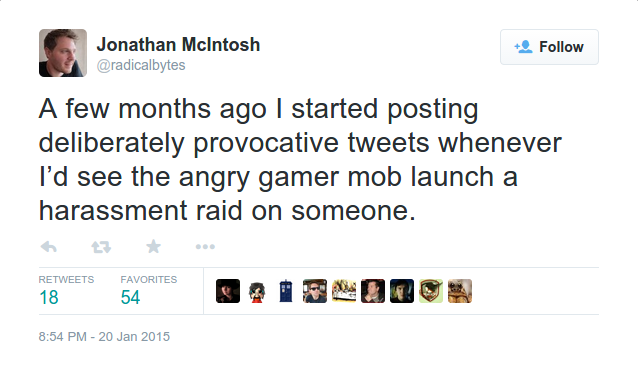 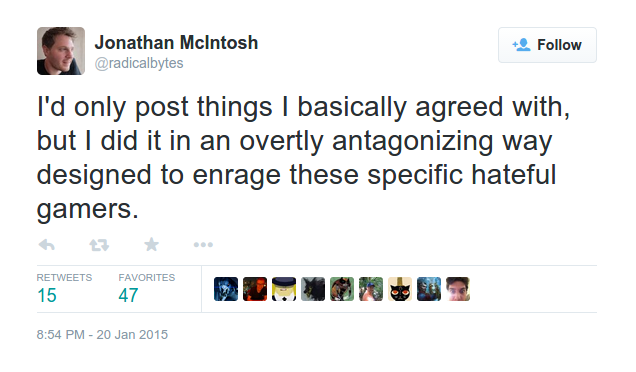 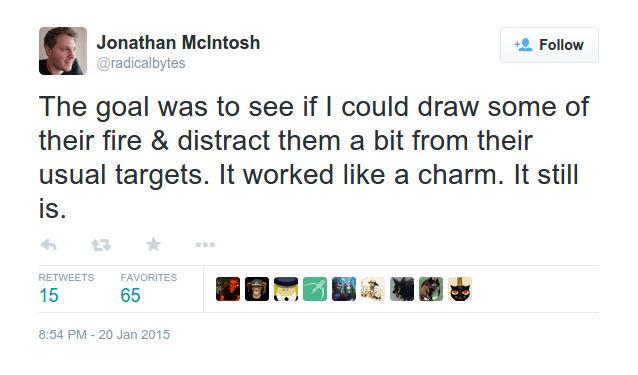 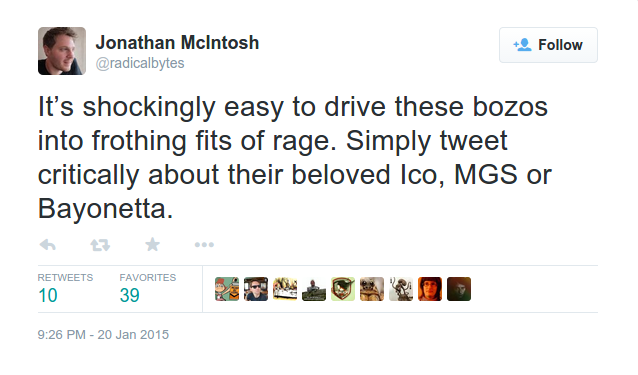 #GamerGate: Looks like #FullMcIntosh is pretending his bile was a joke because @Intel nagged him. His anti-soldier BS clearly wasn't a haha.

#FullMcIntosh hey Josh, a bunch of those Israel tweets were a year or more before #GamerGate pic.twitter.com/kiBMtvVEjq

Like I said, no one is buying this shit (*except the SJW hivemind, of course). I laughed out loud when I first heard it. Then, I got a little disappointed. I hadn’t taken Jonathan McIntosh for a complete coward, but I guess I misjudged him. The way he words the tweets is interesting as well. He said he only posted things he “basically agree[ed] with.” Like many others have said, spoken like a true politician. I guess you “basically agreed with” blaming mass shootings on video games and sympathizing with terrorist scum (all while blaming the victims).  Or is that something that you’re going to try and wash away as well?

I know one thing, GamerGate is never going to let you live down your actions over the last five months. Intel may turn a blind eye, but gamers everywhere are gonna know what shitbags you and Anita are. We have our media and community set up, and we’re not going away. There will always be people around to expose you. The compliant establishment gaming media, who censor and ostracize whichever community members they find troublesome, now has a challenger.

Yea, they’re admittedly a lot bigger. They have more money. You obviously don’t have to tell me that. But we’re only months into a multi-year project, and look at all we’ve done to change the landscape. They know we’re not going away. McIntosh is a coward who refuses to stand by his own asinine statements, while we have lions who relish defending their beliefs. I would take our crew over their’s any day of the week, and twice on Sundays.