Last night was spectacular in so many ways, but before I get to my full thoughts on Donald Trump’s big win, I wanna talk about Jesse Singal getting thoroughly beatdown by the SJW hate mob on Twitter. He wrote a controversial column that I didn’t read recently. It was about the transgendered community being out-of-touch with reality when it comes to “social transitioning” for young trans people. Transgendered activists are out-of touch?! Huh, you don’t say, Jesse? As I said, I didn’t read it, but I’m going to partially go through it now for your benefit.

It’s pretty long, so grab a comfy chair and your favorite cold beverage if you plan on reading it. The article opens with the tale of Dr. Kenneth Zucker, who would have to be considered an extremly accomplished physician by most standards:

He headed the group which developed the DSM-5’s criteria for its “gender dysphoria” entry, for example, and also helped write the most recent “standards of care” guidelines for the World Professional Association for Transgender Health  —  one of the bibles for clinicians who treat transgender and gender-dysphoric patients.

The problem for Dr. Zucker is that he isn’t radical enough for some of the Looney Tunes crowd who now steer the conversation in circles he helped pioneer. I honestly feel sorry for this guy:

The GIC [Dr. Zucker’s clinic], which operates out of CAMH, pronounced “Cam-H,” had been standing firm against a changing tide in the world of psychological treatment for children with gender dysphoria. The “gender-affirmative” approach, which focuses on identifying young transgender children and helping them socially transition — that is, express their gender to others through their everyday clothes, name changes, or other means — has been on the rise in recent years, and has become the favored protocol of many activists and clinicians. GIC clinicians, who saw clients between ages 3 and 18, had a much more cautious stance on social transitioning for their younger clients — they believed that in many cases, it was preferable to first “help children feel comfortable in their own bodies,” as they often put it, since in the GIC’s view gender is quite malleable at a young age and gender dysphoria will likely resolve itself with time.

This is a classic tale about how you can never be fully secure in your position among radial communities unless you are fully prepared to go all the way and discard the things you hold dear and know to be true. They will throw anyone under the bus, as Jesse Signal was soon about to find out himself. Anyway, back to this story…

Many activists see this approach as a rejection of young children’s transgender identities, and Zucker as its regressive standard-bearer. As a result, the GIC had been tarred for years as a “conversion” or “reparative” therapy clinic — terms which conjure images of outfits operated out of backwoods shacks in the Bible Belt…

According to a source close to Zucker, he was met at CAMH by Christina Bartha, executive director of the hospital’s Underserved Populations Program. She gave the psychologist a three-ring binder: the long-awaited External Review. Bartha instructed Zucker to read it in her presence, and to offer up any comments he had about it. Not far into the report, Zucker told Bartha that he had noticed a factual error. Bartha responded that the review would be posted on the hospital’s website that afternoon, as-is — no changes. Zucker continued reading and saw that the reviewers had interviewed a handful of activists and clinicians who had claimed that the GIC was engaging in conversion therapy; that photos were taken of patients without their consent and then disseminated; and that former clients said they felt traumatized and ashamed as a result of their time there. Then, Zucker got to a truly bizarre allegation: A former patient, at the time an adolescent transitioning from female to male who was seeking a sex-reassignment surgery referral, said that Zucker had asked him to take his shirt off, laughed when he had done so, and then told him, “You’re a hairy little vermin!” The incident had never happened. Zucker looked at Bartha and, in disbelief, said something like, “So, you are going to post this on the website?” Yes, Bartha responded. Meaning that in a few hours, Zucker’s many detractors would read about how he had cruelly mocked the body of a young trans person.
Zucker told Bartha there was no point in continuing the exercise. Sometime around 9:00 or 9:15, Bartha left, and she was replaced by a human resources staffer who informed Zucker that he was fired, effective immediately. He was told it wouldn’t be a good idea for him to retrieve his coat and keys from his office — someone would grab them for him. Zucker was presented with materials on how to find a new job, and that was that.

Just like that, an accomplished man was completely destroyed based on a false allegation. I imagine things would have went better for Dr. Zucker if he had been a female-to-male trans, or a woman…anything other than what he is, a white man. Come to think of it, that seems to be Jesse Singal’s main problem as well. OK, thinking somewhat rationally and being fair to an established physician was an issue for him as well, but had he been black or trans, he might have gotten by. Come to think of it, isn’t he a Jew? 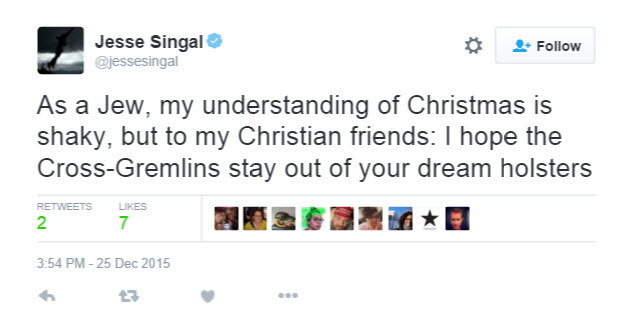 Maybe there’s still time to call in the Anti-Defamation League, Jesse. You probably need all the help you can get after the number “social justice” has done on you.

I'm being accused in rumor-y online circles of threatening to out trans people. How fucked up is that? pic.twitter.com/Y3xRVzI3s9

To have people who ostensibly care about harassment tell me to chill out about someone spreading a false accusation. Screw that.

These are online abusers. I don't care what political flag they fly. If you defame people you are a fucking abuser.

And it is fascinating to watch their conduct be defended by folks *VERY* concerned with online harassment. https://t.co/MVTXCxVph5

“I’m being accused of harassment that is literally not occurring.” Hmmm, where have I heard that story before? OH YEA! I’ve written 900 columns on that topic alone. That must be where the memories are coming from. Jesse, you just learned a hard lesson on what these SJW-types are all about. It was all good when they were lying on your behalf, or libeling people with politics or views you didn’t like, but now that you’re on the receiving end you’ve will realized just how detestable these people really are.

Consider this: you’re not the only one they’ve lied about.