First off, despite the title of this piece, I wanted to make it clear that I am not passing any judgement on Carbon Based Radio’s Steve Tom Sawyer, or his associate Robin Gething. I don’t know Steve personally, but Robin has always been a cool guy. I am simply giving a platform for my friend Adrien (@Neirdran) to lay out his case. The article he posted last night on ReviewLabs, has been deleted. You can find it posted at this link if you wish to read it as a primer.

I will say one more thing before we begin, and that is, no one is immune from criticism, and we need to be open with that criticism. I’m beginning to think that we have let too many things go unaddressed for too long. too much back-channel bickering, and not enough sunlight and openness.

Neirdran has come across the video that some people in GamerGate have claimed proved that Mr. Sawyer was assaulted by SJWs and driven from his home, as he claimed. I’m about to show it to you, but before I do, I wanted to ask Neirdran how he came across the video. So, I did. Here’s his answer:

“I got contacted by a source that I won’t disclose. He doesn’t have a Twitter anymore.”

That was pretty brief and cryptic, and I’m sure we all have some ideas as to who that might be. I’ll just leave it there. Here’s the video in question. It does seem to be severely lacking. The only thing I see is a couple of women screaming at him to get out, with no context. One of them says “Steve, you’re scaring us.” Who knows what the situation is, really. We only see a very brief 20 second snippet.

I asked Neirdran what he thought about those who took the video as proof of an assault having taken place:

“Those who blindly accepted  “verification” on  Sawyer’s video are now saying that since I can’t verify some of the anon quotes in the previous piece, that they’re all lies. These are the actions of hypocrites, who only selectively apply their morality. Also, consider this: they highly hyped that video to get money.

My opinion of the video, is that it’s taken out of context, and from what I’ve gathered with former RevueLabs employees, his personal behavior might be what caused this conflagration in the first place. Trying to put it on “Anti-GamerGate” is basically like what the SJWs did with threats from sockpuppet Twitter accounts. Steve Tom Sawyer is our own Zoe Quinn, and if we are about ethics, we have to take care of it. The people who accepted this farce of a video, listened and believed without verifying. One of the main sources of verification, KingofPol, is not a credible source. He’s known for crafting lies. People should have been much more skeptical from the beginning, in my opinion.”

Part of Neirdan’s story last time, concerned the demise of Radio Nero, the program hosted by the wonderful Milo Yiannopoulos. As I’m sure most of you are aware, I’m a huge admirer of his work, and think he’s been a great asset to us, as evidenced by his story today. However, after the story yesterday, it became apparant that not everyone is a fan. Here is the co-host of Carbon Based Radio, and chief Sawyer defender, Robin Gething, with his thoughts on Milo (who also goes by the pseudonym Nero on Twitter, and is referred to by that here): 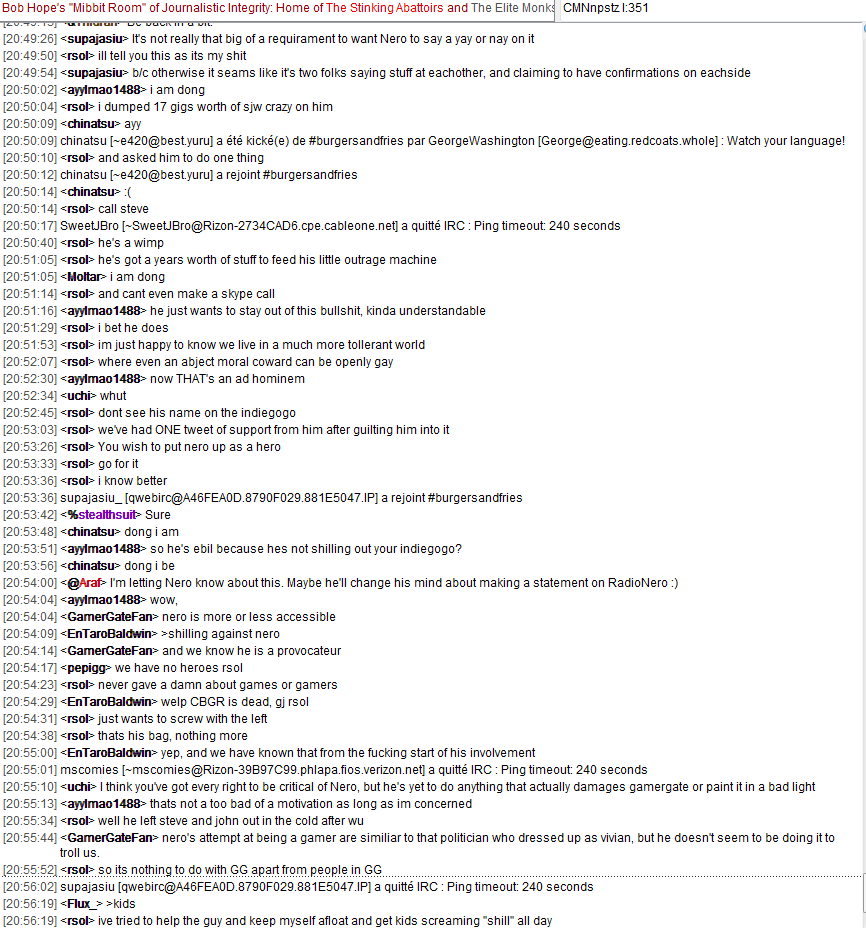 Robin has been a friend in the past but calling Milo a”wimp” is crazy. He also goes on to say that he “was happy to know that we live in live in a much more tollerant [sic] world, where even an abject moral coward can be openly gay.” Then he downed Mr. Yiannopoulos further, because he only promoted Carbon Based Radio  once on his Twitter. Well, I only promoted it once myself. I didn’t realize that we all had to drop everything and help them with their crowd-sourcing project. Someone in the chat calls him out on it, but I will go ahead and do so as well.

I know these guys are mad about Milo allegedly calling Sawyer a “trainwreck” and a “personal liability,” but this type of smearing against our best advocate is not cool, Mr. Gething. We all have disagreements, as I’ve stated. But Milo has done nothing that I know of to warrant this, and has tried to stay out.

Neirdan had a comment as well, but these are his views only. My problems with Gething only extend to him trashing Milo.

“Milo did so much for GamerGate, smearing him like that to shill for his little radio stream shows how little that guy cares about GamerGate and how much he cares about getting audience, at all cost.”

I’ll finish by saying this: the reason I gave Neirdran this platform, and brought some of these issues to light, is so these issues could be discussed in an open way. Anyone is free to post a rebuttal in the #BasedCommentSection, or on Twitter.  I haven’t gotten in contact with every principal, but I hope they will add to this discussion below. I take no position on the Sawyer matter, although I don’t agree with badmouthing Milo, given all that he’s shown me over this GamerGate journey. And no matter where you fall, let’s agree that no one is above reproach. These types of discussions need to be had, when the need arises.