GamerGate Finally Brings Me to D.C

Even though I’ve been a political junkie almost as long as I can remember, I’ve never been to Washington, D.C. It’s kind of always been a dream of mine, but I’ve just never made it happen, for whatever reason. I even moved to Richmond, Virginia last summer, which is not too far down the road. But I still haven’t been, mostly due to my GamerGate work. I guess it’s fitting then that the same community would finally be the ones to bring me to the nation’s capital. I’ve had many ups and downs these last eight months or so. I’m rather certain this is going to be filed away in the ups category.

In case you didn’t already know (or glean from my intro), GamerGate is having a meetup in Washington, D.C. on May 1st at 9:30 pm EST. Milo Yiannopoulos and Christina Hoff Sommers are both confirmed to be in attendance, so you don’t want to miss this one, if at all possible.

Here’s some more details, courtesy of Milo’s personal site (also, check out his column in The Sun from earlier today, as well as his recent interview): 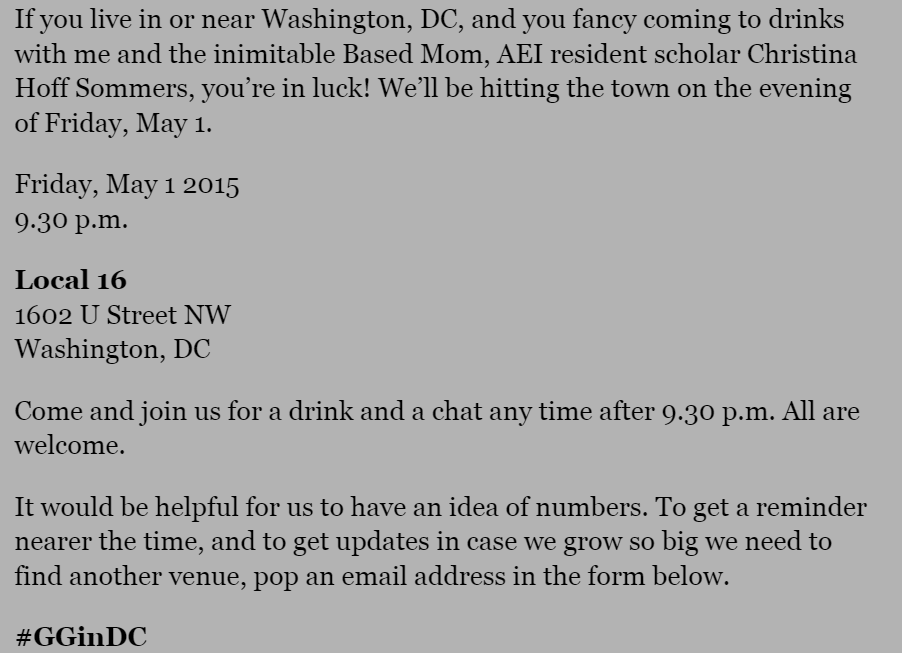 I’ll also have an open thread on the day of the meetup, so people can come here and check out updates that I have from meeting people around the city, or anything else I feel like sharing. Thank you for your support, as always. I’m about to go get a haircut, so I’ll catch you guys later. Feel free to treat this as an open thread as well.