I was enjoying an episode of The Wire from season one and so I’m about thirty minutes late, but there’s some huge news coming out of the gaming world, and it has nothing to do with SJWs or GamerGate. Nintendo president Satoru Iwata has died. He was 55-years-old. To say this is depressing would be a massive understatement. He was always one of my personal favorites, and I know many others feel the same way. His love of gaming was infectious, and you can tell he had a deep respect for the craft as well, as its history.

Here’s the statement from Nintendo announcing the passing: 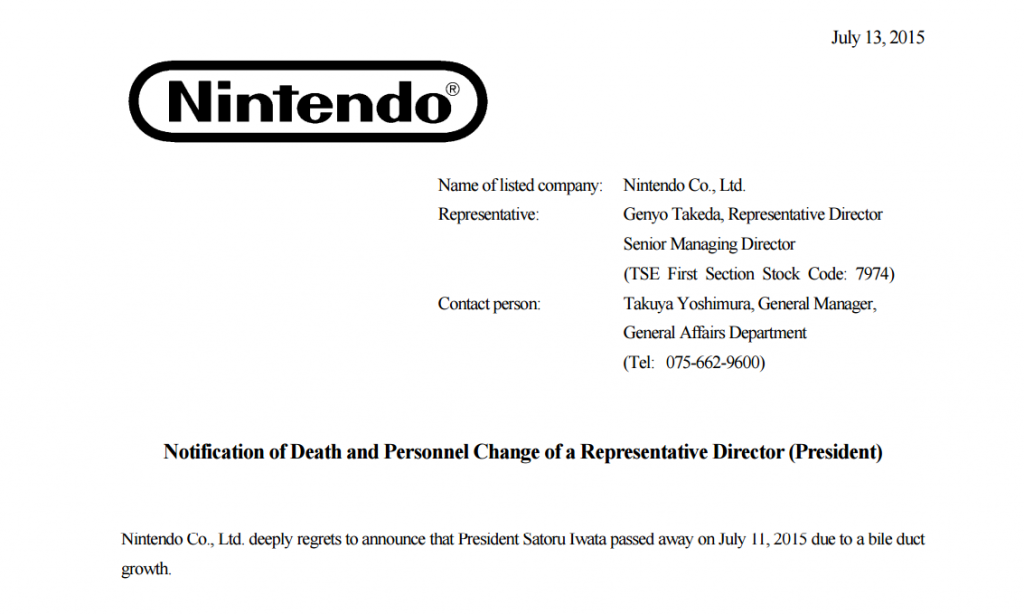 Iwata underwent surgery last year to remove the growth and had resumed his duties after a brief period of recovery.

Iwata began his career as a freelance programmer for HAL Laboratory, a subsidiary of Nintendo, before joining HAL full-time after college. During his time at HAL, Iwata worked on games such as Balloon Fight and the Kirby and Earthbound franchises. He eventually became the president of HAL in 1993.

In 2000, Iwata joined Nintendo proper as the head of its corporate planning division. When Nintendo president Hiroshi Yamauchi retired in 2002 (Yamauchi had been president since 1949), Iwata was picked to succeed as the fourth president of the company.

Iwata oversaw the development of the GameCube, the Wii, the DS, and the Wii U.

As well as The Telegraph:

Mr. Iwata, who was made the fourth Nintendo president in its 126-year history in 2002, oversaw the release of the Wii and the Nintendo DS, the best-selling home and handheld consoles respectively in Nintendo’s history.

The executive’s health issues had been documented in the past. He took leave last year for surgery, but told shareholders a year ago that the illness had been caught at an early stage.

Mr. Iwata was the first Nintendo president who was not related to the Yamauchi family that founded the company.

And finally, The Hollywood Reporter:

Born Dec. 6, 1959, and raised in Japan, Iwata joined Nintendo in the 1980s, working on games including “Balloon Fight,” “EarthBound” and the “Kirby” franchise.

Two years ago, he became CEO of Nintendo of America, Inc.

Nintendo’s brief statement did not mention a successor.

This one is going to be tough to swallow. I knew the man had been ailing, but I had no idea it was this serious. My thoughts go out to the Iwata and Nintendo families. I hope the memory of the amazing life he lived help power you through these times. I know gamers everywhere feel the exact same way. Iwata’s love of the medium is what will always stay with me. It was literally infectious.

I’ll update this story as more news comes in. Be sure and leave your thoughts about the late Mr. Iwata down below.

UPDATE II: More reaction from social media, as well as the gaming world…

Thank you for all the wonderful memories. pic.twitter.com/7yN4L29UIJ 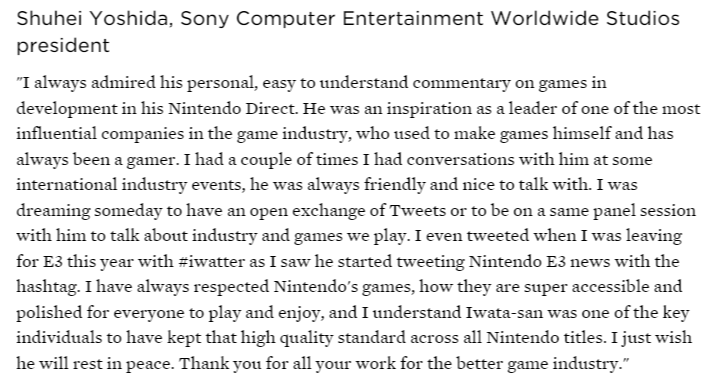