Gawker’s Lame Rebranding Will Fool No One: They’re Still Garbage

Nick Denton, the notorious scumlord who runs Gawker media, has an idea for how to turn his shitshow around. After nearly a year of getting his ass kicked by GamerGate, and fresh on the heels of his company’s latest embarrassment, he has a plan to “rebrand” the site. Why would a company want to do that? Well, it usually only happens when they’re getting their asses handed to them in the court of public opinion:

Such changes typically aim to reposition the brand/company, occasionally to distance itself from negative connotations of the previous branding…

I wonder why Gawker would want to get away from a brand that’s known for outing gay people, publishing illegally recorded sex tapes, and trolling Stage 4 cancer patients. Yes, you read that last part right. Here’s an excerpt from that story:

I do think it takes a special kind of mind-set to see a photograph that literally says “my cancer diagnosis” above it and go, “Yup, let’s go with that one to trash her.” A special mind-set to go after someone for “irrelevant tidbits about your personal life designed to short-circuit any criticism” while she’s publicly writing about her inoperable disease and experimental treatment. A Gawker mind-set, if you will. I don’t necessarily believe it’s deliberately malicious. I think it’s something scarier. I think it’s just casually indifferent.

Gawker Mindset? Hmmmm, why does that remind me of someone? 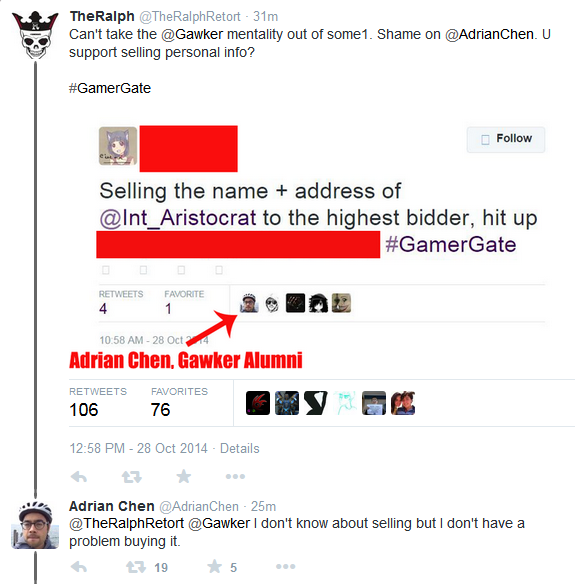 It’s hilarious to listen to Nick Denton talk about this shift, because you can tell it’s fake as fuck. He’s still the same nasty piece of shit he always was, but he keeps talking about making thing nicer to save his bottom line. He actually thinks this sleight of hand will work:

At one point during the meeting, a staffer asked Denton who his dream editor for Gawker.com would be. Denton said that if he could pick anyone to edit the site, he would choose Ta-Nehisi Coates, the Atlantic senior correspondent and bestselling author…

There may be more changes in the works. Denton told Digiday on Thursday that Gawker Media—which owns Jezebel, Deadspin, Kotaku, Gizmodo, and a number of other sites, in addition to Gawker.com—may change its name, which would distance the company from its flagship site’s less-than-savory reputation. Two Gawker Media employees tell Capital that Denton has floated the idea of changing the company’s name, but has not yet decided whether to move forward with the name change.

LOL, Coates has everyone on his dick right now due to his new book. It’s funny to see a sleaze merchant like Denton talk about hiring him, since it would be a demotion. I doubt that’s gonna happen, Nick. Just like I doubt anyone is gonna take your ass seriously here. If Gawker isn’t Gawker, what is it? Some other lefty blog? I don’t see any way this works, to be honest with you. Now who knows if the go through with the full name change, but either way, the shift is not gonna fool anyone, and if they actually do shift, why even exist? I don’t get it.

Denton is in save-his-ass mode, though. So anything sounds good right about now. Let me know what you think. I have a live stream coming up, so I’m going to go prepare for that. Check it out if you’re interested.