I went to bed early last night. Shame on me. As I was sleeping, KingofPol dropped one of the biggest bombshells yet. According to a screenshot allegedly from Gawker owner Nick Denton’s Facebook page, he has infiltrated GamerGate. The tone policing people like me and KoP were talking about being a threat? Yep, that’s the angle Denton and his paid thugs are using.

He explicitly admits that he’s been trying to sabotage the group for weeks. Denton also shits on the mainstream media’s efforts to shut us down, which is actually kind of funny. This notorious tax swindler actually thinks pretty highly of himself. He really is the oblivious blowhard that everyone makes him out to be. After reading this post, I am now 1,000% more determined to bring his shit media empire to an end.

Here’s the full leak below. I am actually kinda stunned that he was so fucking stupid as to put this out publicly. But, this is Nick Denton we’re talking about here. I guess he just had to brag on himself: 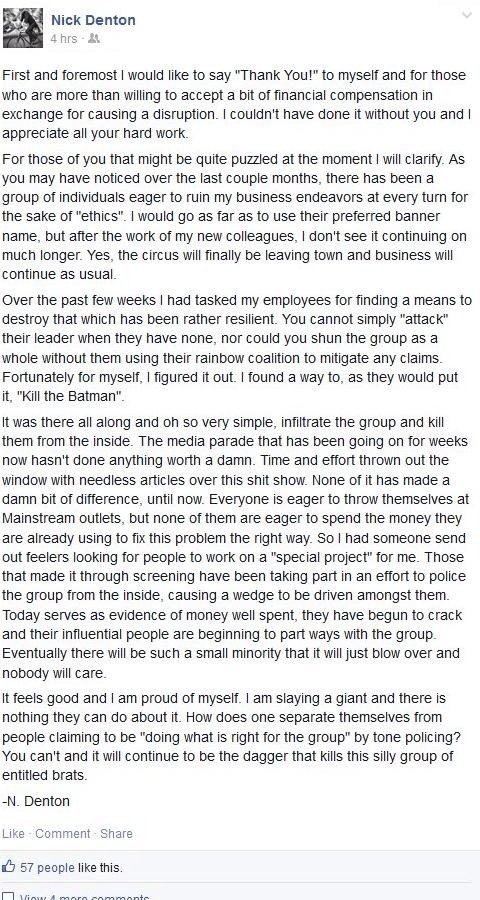 This piece of gutter trash actually thinks he has accomplished something. I never wavered, myself, but there was a lot of doubt and recrimination in the air yesterday. Ironically, the man who is going to have both started, and ended that, is Nick Denton. I was telling people as loudly as I could yesterday that all this tone policing garbage was nonsense. Well, not only was it nonsense, but it was also apparently the work of paid shills. We had heard reports of Denton paying people last week, but I didn’t have any evidence to corroborate that. Thanks to KingofPol, now we all do.

Pol, you can definitely be proud of this scoop. Hopefully, this will put an end to the tone policers..either way, I know I don’t give a fuck about them. We’re going at Gawker Media and their corrupt media allies as hard as we can. Some traitors will not slow that down. I think we can assume who some of them may be, but let’s not go on a witch hunt. Just be on the lookout for their tactics. We now have apparently confirmed that Nick Denton is so threatened by us, that he has hired people to try and take us down from the inside. You know what would be a perfect way to welcome that news? Sending emails to Gawker sponsors. Keep the pressure up. They’re starting to take us VERY seriously.

UPDATE: More can be read on this story HERE.