George R.R. Martin, the writer behind the Game of Thrones novels that have turned into a mega-hit HBO show, is learning a tough lesson. It’s the same one Joss Whedon learned. Hell, even Brianna Wu learned it (among others). What is this lesson? It’s that SJWs always eat their own, no matter what. If you’re an artist on their side, you better not create anything that goes against their dogma, or they will turn on your ass in a heartbeat.

Last night, a rape took place on Game of Thrones. I haven’t seen much of the show, although I’ve been meaning to catch up, but I know that the old ultraviolence is not out of place there at all. Men are regularly fucked up and tortured in various ways on the show (and women have been raped plenty before). But apparently we aren’t supposed to have rape scenes anymore. You see the same feminists wringing their hands every time it happens now. Well guess what, fuckwads? You don’t have a say in what creators do!

Here’s some of the wrath Martin has faced: 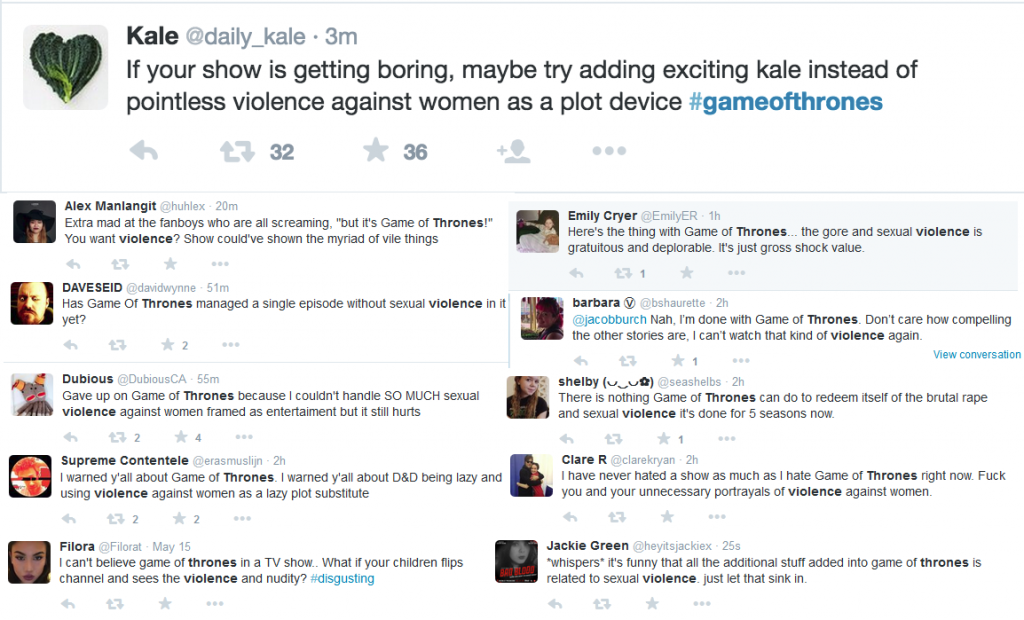 Gawker Media went on the attack, as did Vanity Fair, with Salon joining in with the full rundown of SJW hand-wringing. I see this every single time there’s a rape. It’s always “it’s bad storytelling” or some other bogus reason. They’re focusing on what the camera did, etc, trying to makeup how they think this is going to go. You could at least wait until the next episode. I’m pretty sure the showrunners think very highly of the actress who plays Sansa. Know why? They said so. So I think she’s going to have a lot of stuff to work with in the coming weeks.

For his part, Martin is defending the show:

“Let me reiterate what I have said before,” Martin told his readers. “How many children did Scarlett O’Hara have? Three, in the novel. One, in the movie. None, in real life: she was a fictional character, she never existed. The show is the show, the books are the books; two different tellings of the same story … There have been differences between the novels and the television show since the first episode of season one. And for just as long, I have been talking about the butterfly effect. Small changes lead to larger changes lead to huge changes.”

Supporting the SJW hatemob on their crusades means nothing. They will turn on you in an instant. Perhaps George R.R. Martin can put it off on the show a little bit, and get away from some of this. But for the life of me, I can’t understand what these people are thinking. It’s Game of Thrones, you idiot. Of course stuff like this is going to happen. I guess when you’re trying to enforce a political agenda on a populace who doesn’t want it, you throw logic like that out the window.

UPDATE: How did I miss this classic freak-out from The Mary Sue? 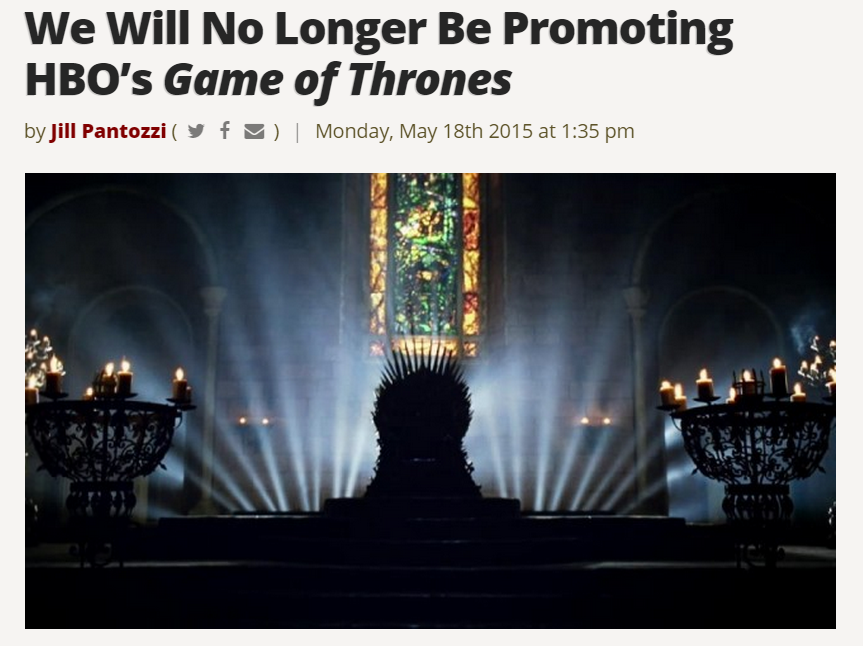 The Mary Sue has decided we will no longer be actively promoting the HBO series Game of Thrones. Allow us to explain…

Before we dive into why we felt this was a choice which would cause us to stop promoting the show, allow us to say something very important: rape is not a necessary plot device. Really think about that before shouting “creative freedom” in our direction, please…

So, from this point forth there will no longer be recaps, photo galleries, trailers, or otherwise promotional items about Game of Thrones on The Mary Sue. The newsworthiness of other items will be discussed by the editorial team on a case by case basis.

…We simply can’t bring ourselves to be excited by a product which no longer meets our needs as fans.