The SPJ AirPlay event starts tomorrow at 10AM EST. Don’t know/remember what AirPlay is? Here’s a refresher:

AirPlay is the first live and live-streamed GamerGate debate. Actually, it’s three debates – two in the morning and one after lunch. But many on both sides of this year-old controversy are skeptical about AirPlay, and they’re definitely wary of each other. Fortunately, AirPlay’s sponsors are neither about either.

AirPlay starts in the shallow end. In 15 minutes, learn the contours of the cruelest online controversy you’ve never heard of. If the two sides agree on anything, it’s that innocent people have been brutally harassed – from old-fashioned death threats to newer methods like doxing and swatting.

Yet those sides disagree about journalism ethics. Are the journalists who cover an industry valued at more than $10 billion – more than Hollywood’s earnings – behaving ethically? If so, then why all the wailing to the contrary? If not, just how bad is it?

After lunch, the debate broadens. How should the mainstream media cover controversies like GamerGate? How does a reporter interview an “online leaderless movement” and still make deadline? What should the editor know before posting the story? These are big questions that might not get answered in two hours, but one thing is for sure: GamerGate isn just the beginning of what’s to come.

Here’s a screenshot of the schedule: 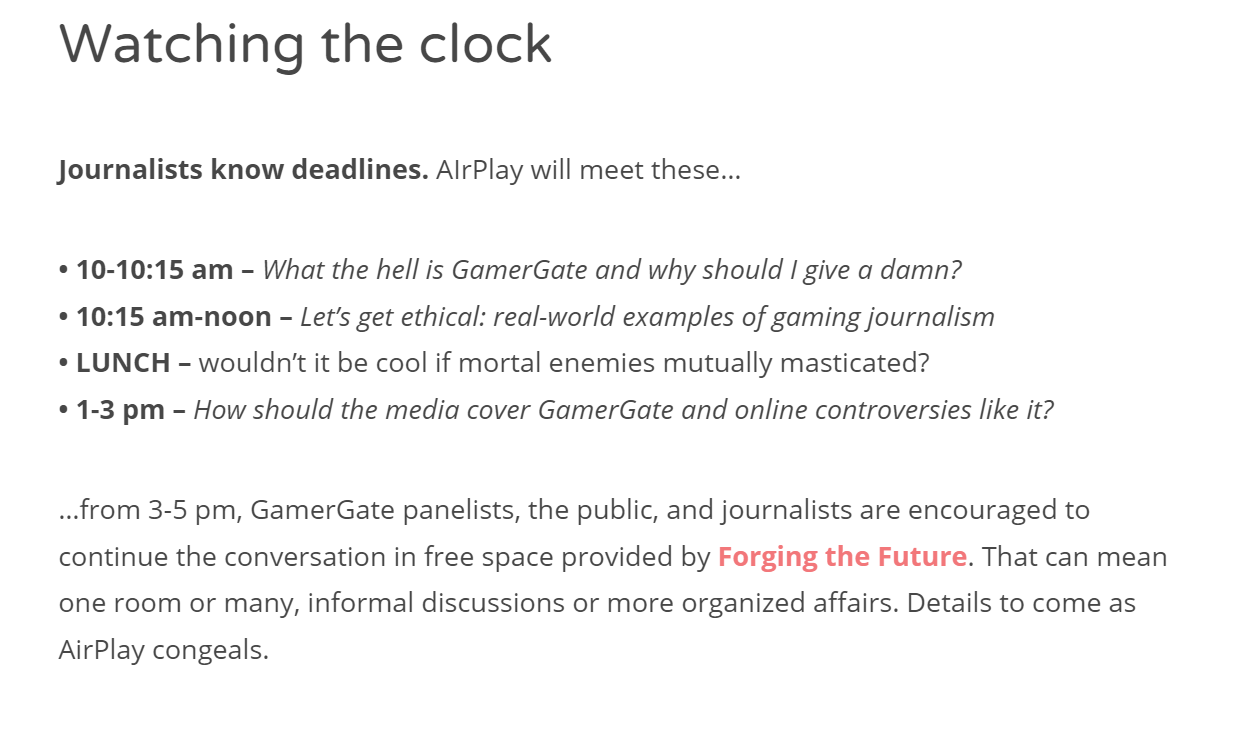 Oliver Campbell originally was supposed to be on the morning panel. I wrote about him backing out last month due to a disagreement with the organizer. Campbell’s still not going to be speaking. But he did make it down to Miami and will be in the audience for the day:

The person who funded me coming down asked to remain anonymous and I'm honoring that request. I don't even know how to thank them for it.

Cool stuff. Let’s talk a little bit more about the event, though. Who all is going to be speaking on GamerGate’s behalf?:

As you can see, we have a pretty badass list. I have no idea how that loser Mark Ceb (@action_pts) got on there, but the rest are pretty awesome. Of course we have Master Milo, as well as Based Mom C.H. Sommers, Cathy Young, Allum Bokhari, and Asche Schow, who writes for the Washington Examiner. I’ve just recently become familiar with her work, and I must say, I am impressed. I’m sure she’s going to do a fine job tomorrow.

I thin that’s about it. The livestream link will be posted in the morning here. They’re encouraging people to do commentary streams, and I may take them up on that. We’ll see who all else is doing them, as well as how many guests I can get to come on. But it’s very possible that I will do one. If so, you will be informed of it here and on my social media outlets. Other than that, enjoy the show, and check back here all day for updates, tweets, screens, memes, and whatever else comes out of tomorrow’s festivities.