I saw some hilarious shit yesterday about the new Star Wars movie. I’m sure most of you witnessed this massive trolling campaign as well, but I’ll recap it, just in case you didn’t. The thing is, I thought I was too late to talk about it all that much, but thankfully, Salon fixed that for me this morning with one of the craziest headlines I’ve seen in awhile… 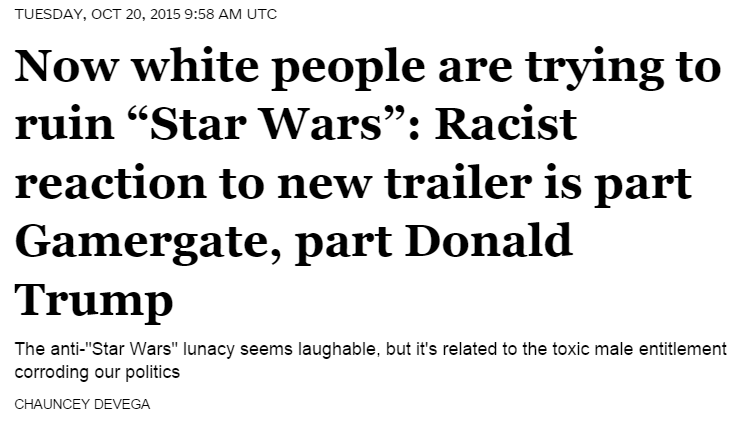 It doesn’t gain any more sanity from there, people:

White racists are none too pleased with JJ Abrams’ new “Star Wars” film trilogy. In protest of last evening’s release of the much-anticipated final trailer for this December’s “Star Wars: The Force Awakens,” disgruntled members of the White Right began a Twitter hashtag “boycottstarwarsVII.” It was a pathetic effort at getting attention; the hashtag was subsequently made popular by those who saw fit to mock it.
It is likely that the white supremacists who are upset by the supposed “anti-white propaganda” and themes of “white genocide” in the new Star Wars films will only have their ire further stoked by Monday night’s trailer that opens with an image of a young woman scavenging a crashed Star Destroyer, a voice over by an alien played by African actress Lupita Nyong’o, then proceeds to focus in on a “black” Stormtrooper turned Resistance leader and hero, and then eventually features a “Latino” X-Wing fighter pilot who valiantly fights against The New Order’s (the next iteration of the evil Empire from the earlier films) improved Tie Fighters.

The guy is ignoring the fact that this whole thing was a massive troll from the start. Were there some people who legitimately believed the things they were saying? Yea, maybe. It was pretty clear that it was meant to get under the skin on SJW-types. Guess what? That shit worked like a charm. Even SJW nutter Feminista Jones saw how fake it was…

Oh hey
You been had

That whole #BoycottStarWarsVII thing is a 4chan troll, and so many took the bait. #StarWarsTheForceAwakens pic.twitter.com/MrdVXTIfD4

The crazy motherfucker who wrote this column even goes into a long diatribe about the Southern Strategy, for fuck’s sake. You can’t even make this stuff up at this point. It reads like a parody of a parody. Then there’s this:

The complexity comes in how science fiction, video games, online communities, and other spaces often attract (white) men and those others whose masculinity does not conform to the “normal” or “ideal” role offered by those systems of “hegemonic white masculinity.” Unfortunately, many of those men who feel embattled as “betas,” “nerds,” or “losers” idealize toxic (white) masculinity as a norm and ideal, replicating the same types of behavior that actually marginalizes and excludes them.

#FullMcIntosh, to say the very least. This guy isn’t the only one sperging out, but for my money, he is the most amusing. Look at this clown. You can tell he’s a true believer like the FemFreak puppetmaster. 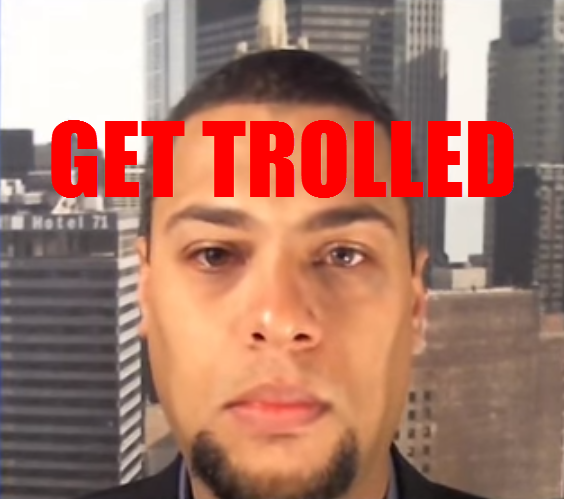 These people are literally insane. I loved the trailer and will be there on Day 1 to see the new entry in the series (the idea that white people aren’t the ones driving the franchise is nutty as fuck, by the way). I don’t even care if ends up being subpar. It would have to be really, really, shitty for me to turn my nose up at it. I like Star Wars that much. Still, I like seeing SJWs get trolled even more. So kudos, to all who helped steer this ruse cruise to such illustrious heights. I’m about to go write up another news hit, but before I go, check out the aforementioned trailer if you missed it last night.