Earlier today, we found out that GitHub has removed all GamerGate materials from it’s site. Previously, we’d been using the site to host a list of gaming media advertisers, so that we could more easily contact them about the abhorrent behavior of people like Leigh Alexander (and companies like Gamasutra). Unfortunately, GitHub has now decided that it’s more important to protect media lies, than it is to let people freely organize, and speak their mind.

At no time have we ever hosted anything even close to controversial on GitHub. So, they can’t use that line of reasoning. Now, they just say that our whole campaign is rotten, so that justifies them purging us from the site. Because a few unaffiliated trolls sent out some nasty tweets to some delicate souls, GamerGate’s speech rights are trampled on. Here’s the email:

It’s terrible no matter which way you slice it. But, this decision appears to have been influenced by an abusive GitHub employee, Jake Boxer. We can’t say for sure how much his input had to do with it, but he was seen gloating today on Twitter. I can only assume that he had a hand in this, and is perhaps directly responsible.

.@defunkt Dear chris are you aware jake boxer is censoring accounts for his friends based on #conflictsofinterest ? pic.twitter.com/STTApoRwQH

How many times will our opponents disregard our right to be heard? Before anyone tells me, I already know it’s perfectly legal for them to ban anyone they want. It’s still a censoring of our speech, and it’s disgusting.  As you well know, this tactic is common on the other side. The corrupt gaming journos remove comments, forbid opposing editorials, and refuse to respect their customers in any meaningful way. In fact, they actively disrespect them, calling them names like “misogynist shitlord,” and “basement dwelling virgin.” They use their friends in the mainstream press to ostracize us, and even kick us off sites like GitHub for bogus reasons.

That’s not fair. GitHub did have at least one reason: Their biased SJW employee wanted GamerGate gone. 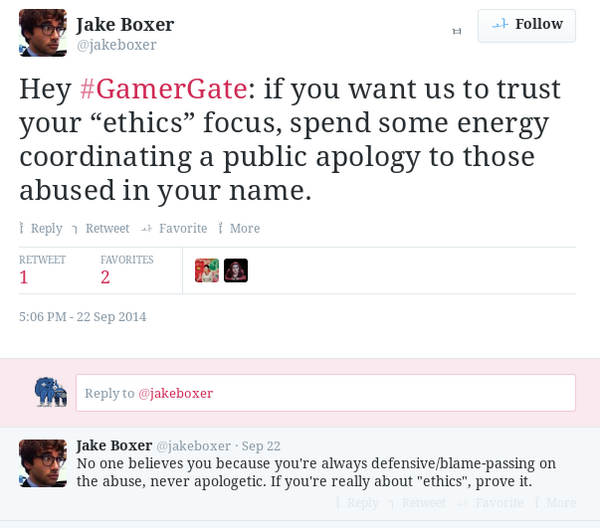 Personally, this is one of the reasons I fight so hard. It’s probably the main reason.  The good thing is, things like this actually make us stronger, in the long run. We already have our resource hub up on another website. It’s getting uploaded on bitbucket.org as well, and probably already is up, by the time you read this. This move literally did not affect us in the slightest. All it did, was once again expose the SJWs for the fraudulent hypocrites that they are. It going to actually end up helping us, like all these censorship moves have so far.

UPDATE: After i finished this article, but before it went to press, I was provided with some more information about GitHub. It seems like they’re now doing research on people who are complaining about this decision. This put the safety of user date into serious doubt (and if true, violates their own terms of service). We’ve yet to hear a response from GitHub.

From Twitlonger, where the accusation was made:

I recently contacted GitHub via a contact form in regards to a specific complaint regarding the conduct of a staff member, and the removal of a repository. The complaint was sent at approximately 2:55am UK time, from this email address ([email protected]). At 3:03am, I received an email notification from a website calledwww.emailsherlock.com. This notification informed me of the following:
“Someone from San Francisco, CA, United States searched your email and found your social media profile(s). To see what they found out about you, click here.”

After clicking the link, I was redirected to a page, to my horror, detailing all of my online profiles associated with the email address I had used to contact Github, which is my primary email address. One of the sites linked potentially contained my personal details. As to my searcher, the site elaborated:

“On Oct 03,2014 at 10:02 pm* someone from San Francisco, CA, United States searched for [email protected] through our website. Most probably the person that searched for you has a phone number starting with 415 area code.”

Upon testing the legitimacy of this website, by searching for an alternative email of mine, I noted that it does not inform the searcher that the subject of the search is notified a search has been conducted. This means that whoever searched for me did not intend for me to be informed. This is done automatically, without the searcher’s consent or knowledge. I also noted, from searching for my alternative email address, that it accurately identified the city from which I conducted the search.

In essence, I feel confident in the validity of the information the website provided me in regards to the location of the person who searched for me. I also feel confident that the person did not know I would be informed a search had been conducted, nor that I would know where the search was conducted from.

Now. This search against me was conducted only minutes after I had submitted a complaint against GitHub, and a member of GitHub’s staff in particular. This search was conducted from the county in which GitHub is stationed. Based upon these two facts, I am left to conclude that the person who searched for, and assumedly through, my social media profiles was in fact an employee of GitHub, and likely the person who received my email of complaint.