It looks to be another red letter day for the “patriarchy.” Not only does the Super Bowl start in less than 2 hours, but we also have Gloria Steinem apologizing for putting her foot in her mouth last night on Bill Maher’s HBO show. As Maher rightly pointed out, if a man had said what she said, then he would have been called a sexist lout. As it turns out, Ms. Steinem ended up taking so much heat from her own side that she had to issue an apology earlier this afternoon. We talked about this a little bit on the Killstream last night, but that was pre-apology. Let me give you the rundown before I go settle in for the game.

Here’s a recap of her original comments…

Feminist icon Gloria Steinem has drawn the wrath of the Twitterverse for suggesting that young women supporting Bernie Sanders’ presidential campaign are doing so to gain the attention of men. “When you’re young, you’re thinking, ‘Where are the boys? The boys are with Bernie,’” Steinem told Bill Maher Friday night on the comic’s HBO show “Real Time.”

Maher leapt right on her comment. “Now if I said that, ‘Yeah, they’re for Bernie because that’s where the boys are,’ you’d slap me,” he said.

She went on to claim she wouldn’t have slapped Maher, but we all know how these rad fems play both sides of the fence when it suits them. Since it’s their darling Hillary Clinton getting blasted by young women voters, the knives have come out. Sexist rhetoric is perfectly fine in the defense of Ms. Clinton. Steinem isn’t the only one, either. Take a look at what former Secretary of State Madeleine Albright has been saying recently…

While introducing Mrs. Clinton at a rally in New Hampshire on Saturday, Madeleine Albright, the first female secretary of state, talked about the importance of electing the first female president. In a dig at the “revolution” that Mr. Sanders often speaks of, she said that the first female commander in chief would be a true revolution. And she scolded any woman who felt otherwise.

“We can tell our story of how we climbed the ladder, and a lot of you younger women think it’s done. It’s not done,” Ms. Albright said of the broader fight for women’s equality. “There’s a special place in hell for women who don’t help each other!”

Mrs. Clinton laughed, slowly clapped her hands and took a large sip of her beverage.

In an attempt to explain Mrs. Clinton’s struggles with female voters in New Hampshire, Ms. Albright said during an NBC interview on Saturday that women could be judgmental toward one another and that they occasionally forgot how hard someone like Mrs. Clinton had to work to get where she is.

At least Steinem had the good sense to apologize for her remarks:

It’s pity for her that the mob isn’t buying it, though. I guess that’s because it’s transparent bullshit… 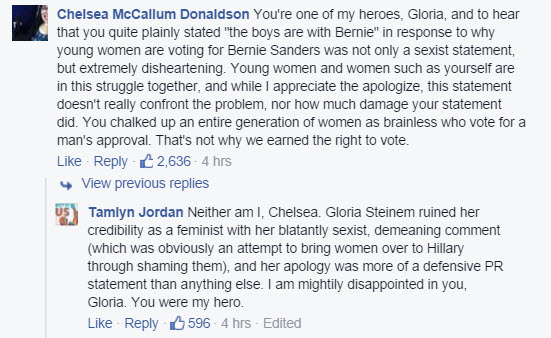 As I said, it’s been a banner day for the “patriarchy.”