I have to weigh in on this #IStandWithTauriq hashtag real quick. Honestly, Tauriq Moosa isn’t really worth another article. His histrionics the last couple days about quitting Twitter is one of the biggest displays of bullshit that I’ve seen in awhile. He’s approaching Arthur Chu levels of offensiveness here. Moosa writes about video games, openly talks about how he knows almost nothing about them, and expects to not get mocked for that? It’s not like he’s writing positive things, either. He’s calling out The Witcher 3 for being racist, and shit like that. So of course he’s gonna get scrutinized when he says he doesn’t know what Fire Emblem is and talks about being ignorant of Steam. He writes for Polygon about gaming, but revels in revealing his ignorance. It makes no sense. Most would try to keep those facts under wraps.

Keep in mind, I’ve been trolled on Twitter for months. I’ve been doxed, had swatting threats, friends and family of mine were mocked…the whole nine yards. Never, at any time, did I think about quitting Twitter. I spoke up about it and moved on. This clown is getting sad stories written about him by the likes of The Mary Sue. How long until he raises money off this sob story? 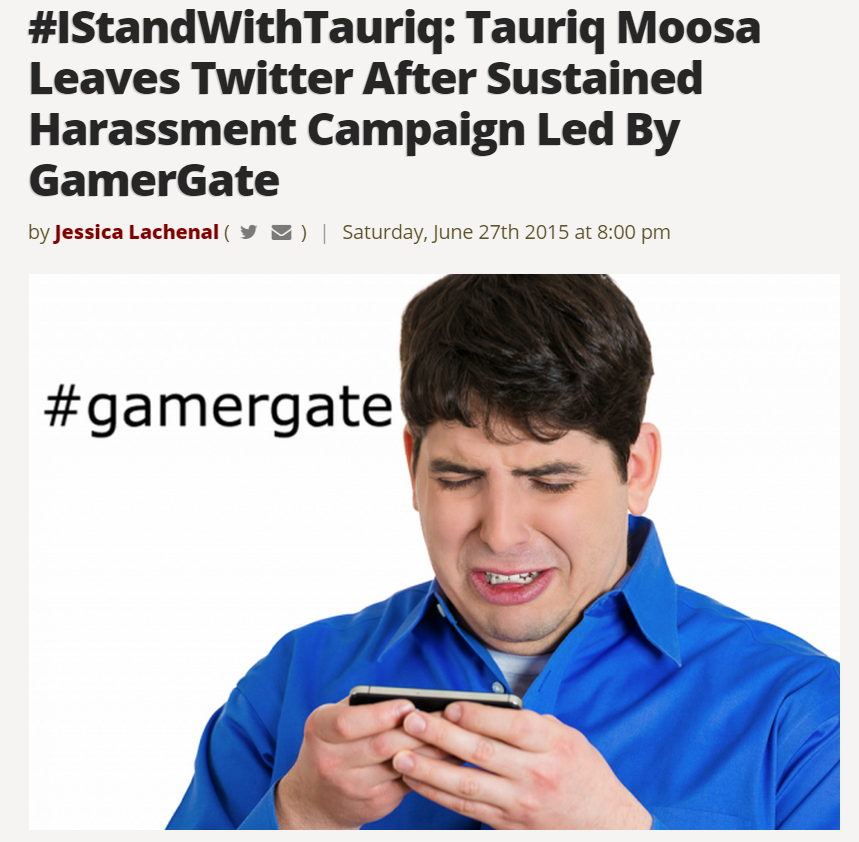 Of course they use the white male crying photo just to gin up their psychotic crowd of rad fems. The funny thing is, I actually posted a comment there on the article, but it was flagged and deleted. They don’t seem to respect the type of open commenting system that I favor. Why even have comments if it’s just a place for everyone to agree? That sounds boring as hell. Well, that’s The Mary Sue in a nutshell. Actually, it describes most of the SJW media sites in general.

Hell, I've gotten just as much shit as anyone, but you don't see deleting my Twitter. I'M STILL HERE. It's prob because I'm not a pussy.

The whole story is a joke. Can you imagine any justification for someone writing this many words about some unknown video game writer (who happens to be games illiterate)? There is one, though. Propaganda. That’s all this is. They wanted to write another hitpiece on GamerGate, and they used this dumbass crybaby to do it. It would be funny if it wasn’t so pathetic.