I’ve spent most of the day trying to figure out how to replace Google AdSense as my adserver of choice. The reason for this is because it was suspended earlier today over a Sarah Nyberg post. The article that was reported is from May of 2015. The sad thing about it is that it likely came from my enemies on our own side. The reason I say that, is because I got a tip on Twitter last night that people were mobilizing in order to get me shut down.

It’s sad to see that folks who are supposedly dedicated to free speech have gone this route, but that’s the situation. I’ve filed an appeal and expect to hear back from Google within the next day or so. The account wasn’t completely banned, so there’s a chance the ads could get turned back on. This happened to me once before back in the fall of 2014. As of now, I’m preparing for the worst.

To be honest, the whole advertiser attack method is anti-speech, and I wish I had never participated in such a scheme. But, the fact remains that I did. So I’ll consider this punishment, should it stand, a just reward for my past advocacy. I’m not quitting, by any means. There are several options I’m going to explore, including starting an entirely new site. Hopefully, it doesn’t come to that. At this point, all options are on the table, though.

I want to thank all of you for your continued support. I won’t lie, days like today make this whole endeavor very frustrating. I do have methods for you to donate to the site, should you so choose. There’s Patreon, and you can also chip in directly on PayPal ([email protected]). Due to the nature of what I do here, I don’t ever expect to be able to support myself via these methods, but help of that nature is always very much appreciated.

Again, I thank the entire community of readers for sticking it out with me. The last couple days were the biggest the site has had since before I went to the UK, so that makes it all the more depressing. Still, I stand firmly commited to my work.

Here’s the screenshot from the Google email. I’ll be back sometime relatively soon with a regular report.

UPDATE: The person who was spreading the pastebin that enemies within GamerGate were passing around to get my ads suspended was @TheIvyClover1. This is a sad night for me, since he was one of my closest allies within the movement. As it turns out, he put this out to people on the “GamerGatePlus” side of things as a way to get my revenue taken away. I’m sure this snake has more info on me, as I talked to him about everything in my life, including plenty of private material, but I no longer give a shit. Here’s the screens that prove what I’m saying. I’m kind of at a loss here, so I won’t expound on it too much at the moment. I might have more to say later, though.

The reason I was able to figure this out was because of the name on the pastebin. Not that many people have a personal pastebin account, and so the name on this one stuck in my mind. The reason for this is Ivy used to send me info dumps under the same handle. I went back through my direct messages, and sure enough, he was the culprit. By the way, this is the same clown who was butthurt over MisterMetokur taking Jayde Fox away from him, which is just as bizarre as it sounds. He somehow thought he had a shot with her, and hated Jim forever for that reason. I might talk about this some more later tonight. For now, here’s the screens.

First, here’s the paste that was circulating to try to get my ads pulled:

The stupid fucker tried to delete it, but to no avail:

Along with a screenshot from it… 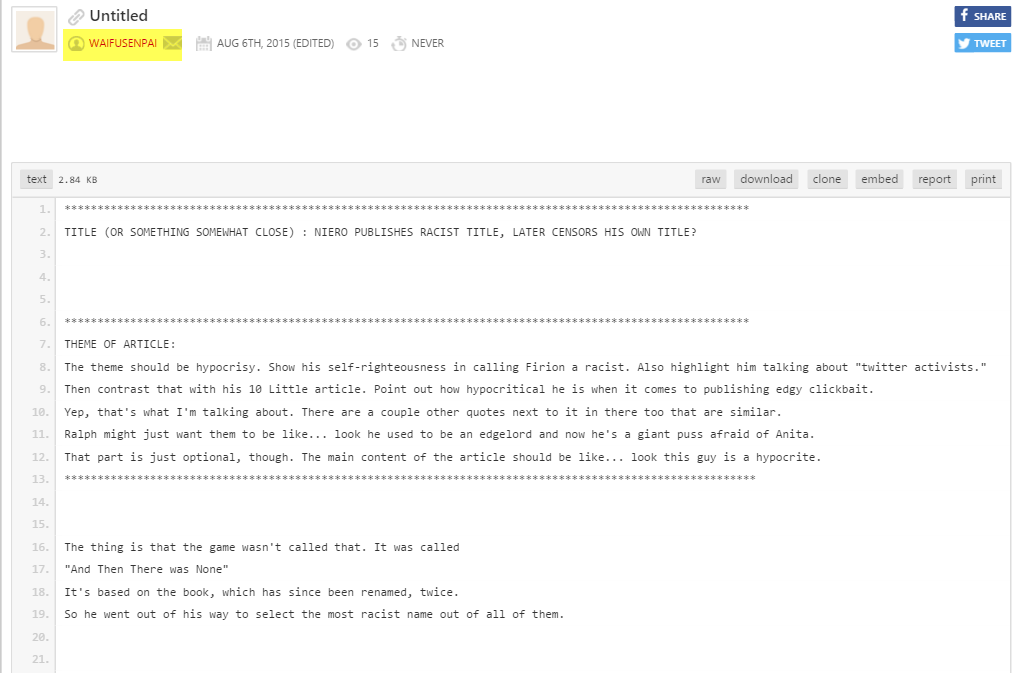 As you can see, the name stands out, and that’s what triggered my memory in the first place. I’ll be back later tonight with more on this whole thing.