Honestly, the insanity that is Randi Harper’s world never ceases to amaze me. Just recently, she revealed that GamerGate had hacked her Patreon supporters list, and has since turned that list over to Milo. Now as far-fetched as this sounds, she claims she doesn’t save her patron’s information. Somewhere along the line, these “hackers,” found this list of patrons in a paste bin account and leaked it to Milo. There’s so much that’s wrong with that line of thinking, I don’t even want to laugh about it…but I will.

Let’s take a look at what the Lord of Lard had to say about the hacking situation, and her feelings toward GamerGate shall we? 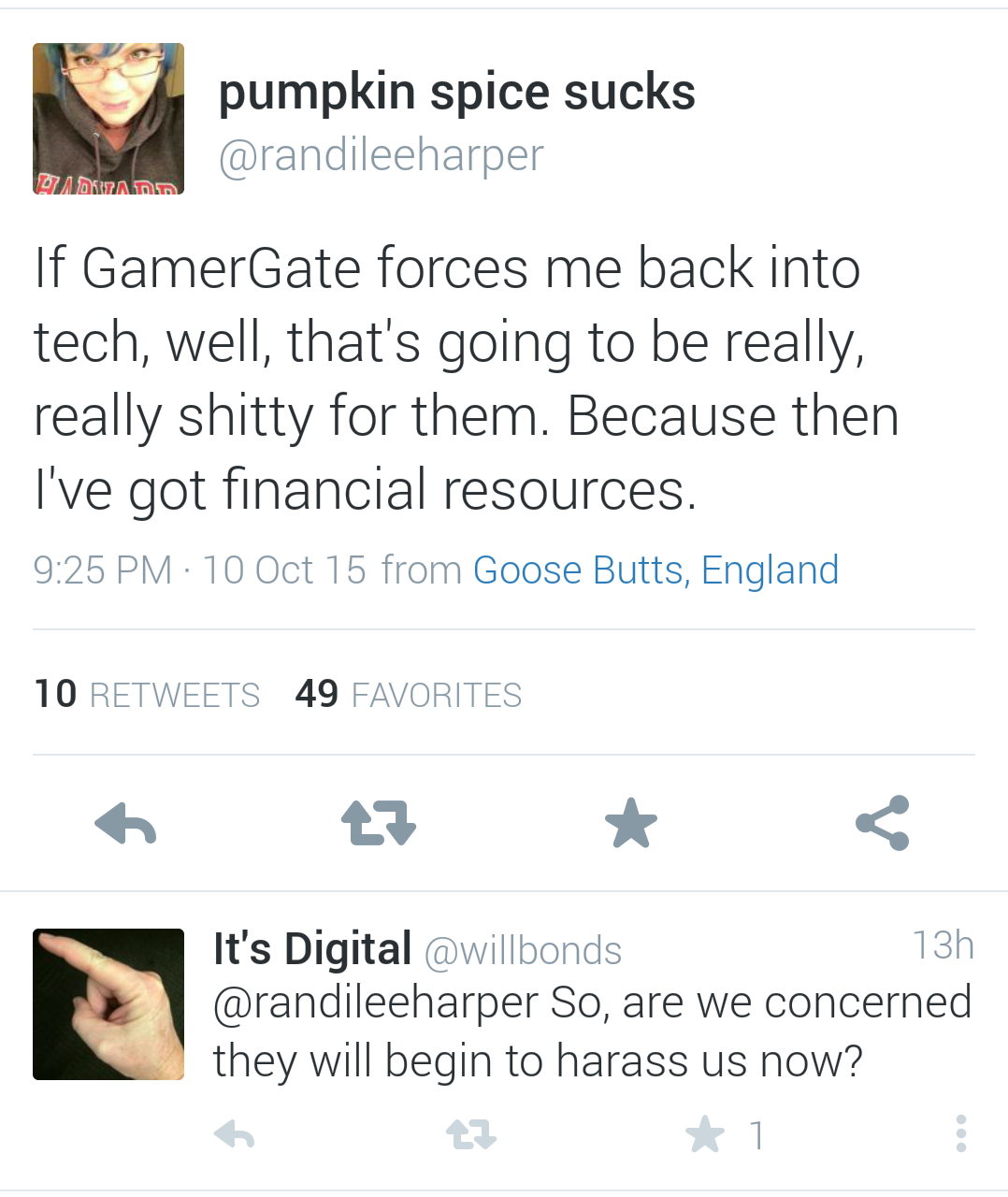 So if all of her donors leave, she’ll have to punch a clock and earn real money that the U.S. Govt will have to tax? I gasp at the thought. Look, a lot of us work 9-5 jobs, myself included. We bust our humps to help contribute to society, plus our own well-being. But when you look at someone as cowardly as Randi Harper, and you realize that she’s nothing but a woman who’s a professional victim—you can’t help but get pissed. As ridiculous as her half-assed OAPI initiative is, it’s even more absurd that people just give this chick money each month for nothing! 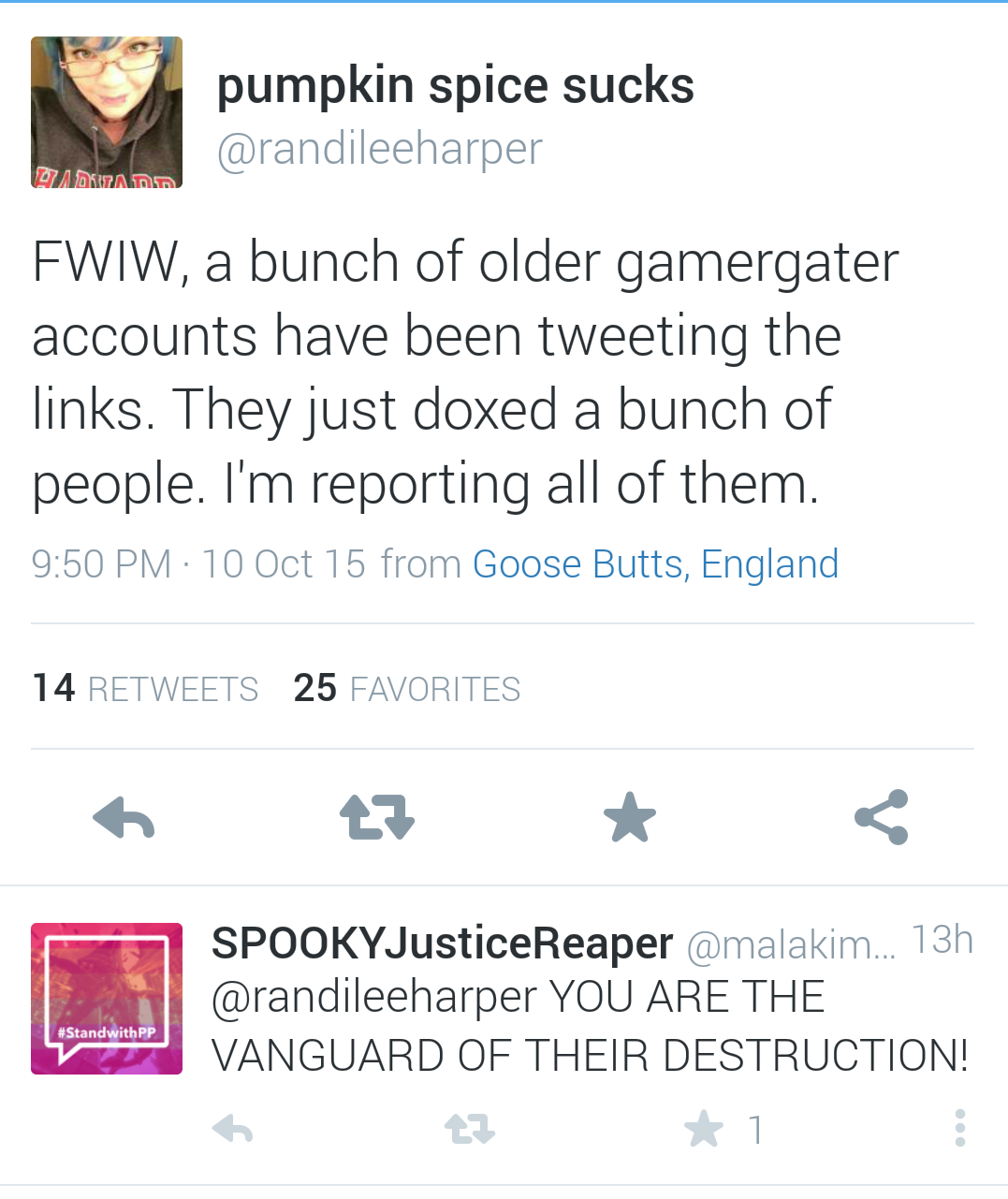 The funniest part of her cry for help is that GamerGate (speaking as if it’s an organization of baddies) forces her to:

What’s left of her patreon donors to make us pay? And by us I mean the millions of gamers, clean journalists, and fans worldwide. Now if that’s not a punchline, I don’t know what is, because many of GamerGate’s supporters have doxed themselves and nothing has happened. Ever. The reason why is because the same supporters of feminism and people like Zoe Quinn, Brianna Wu, and Randi Harper live and exist for drama and social interaction with an audience.

Should I call the supporters of these charlatans cowards? Sheep? Cultists? Sure I can, but what they’re honestly just misguided individuals who need to believe in something. We saw this with WWII and the Axis powers, when you’re lost and you don’t know how to carry on—someone will lead you in a direction. Whether you choose to follow or not is entirely at your discretion.

The crème de la crème came when she claims that for what it’s worth, a lot of the older GamerGate accounts have been tweeting her the links, and that she’s reporting them. But how can that be Randi when YOU, the creator of the GGautoblocker, have made it to where these accounts should have been blocked from accessing you…unless you created them yourself as a vanguard against your own financial destruction. I’m right, aren’t I?

See folks, it’s too easy to create sock puppet accounts and follow a few people and create Tweets just to do it. Let them sit for a long time with no activity, and start up a shit storm just to get more money—I mean attention when people’s donations don’t suit your lifestyle anymore. 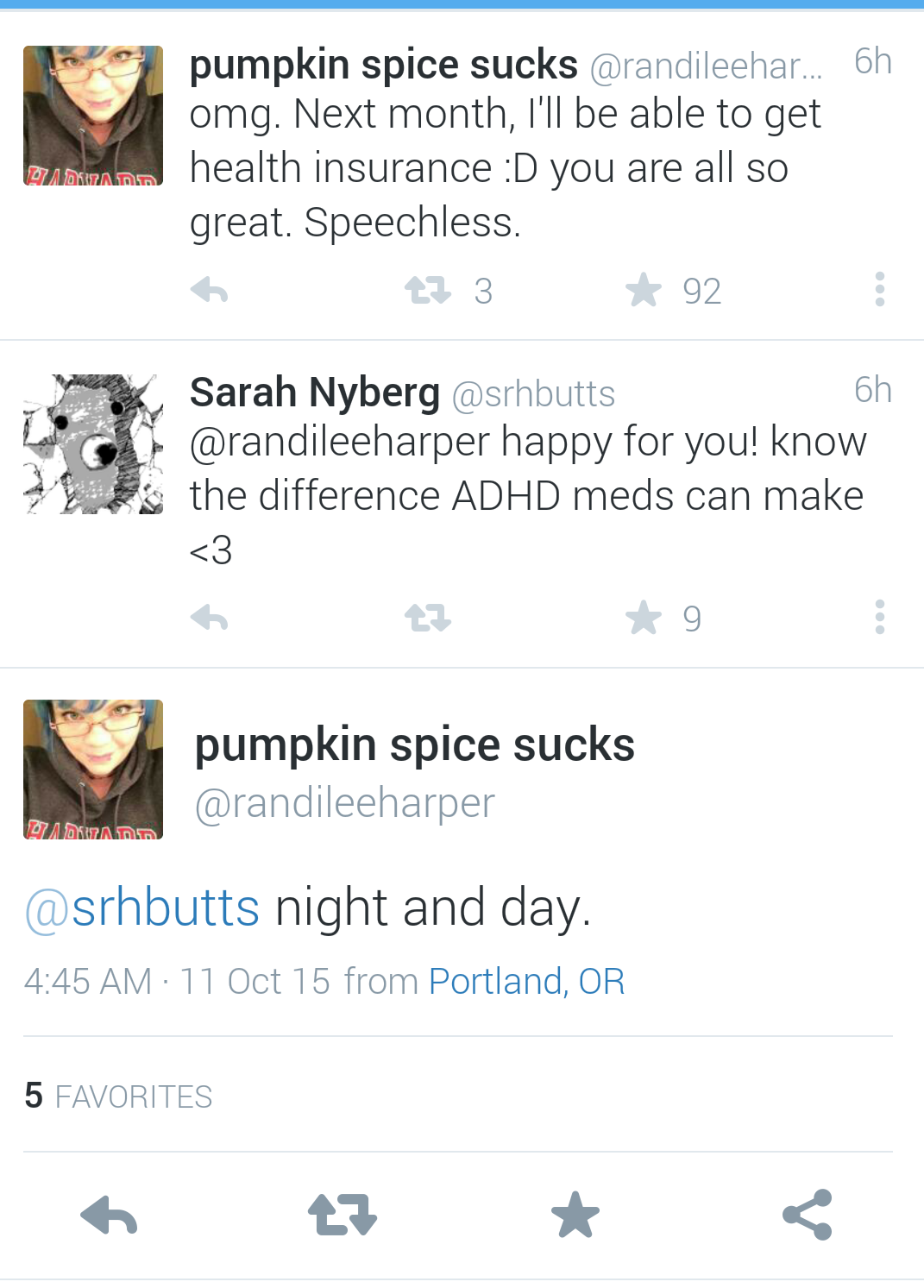 According to the little spud, she’s needing all this extra money to get her medication for ADD back. I can tell you if you visit your psychiatric doctor and keep up on your visits you can get your ADD meds either free or heavily discounted from your health insurance plan. Oh, and look who popped up just to join the fun like the gopher they are: Sarah Nyberg. 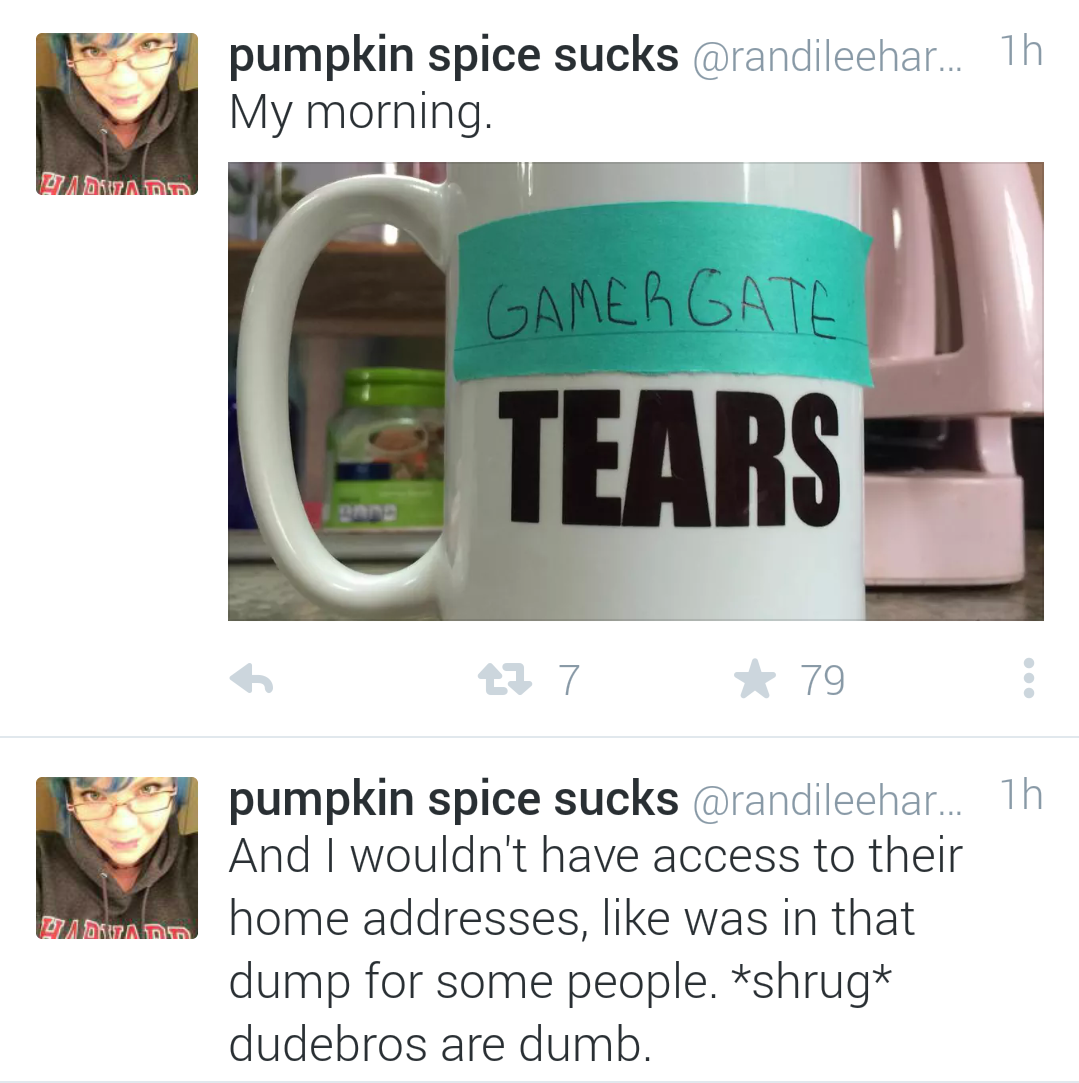 It would appear that keeping a low profile isn’t the recipe of the day at all in this case, as anytime there’s smoke you’ll see the fire. It comes down to this folks…we know what’s coming because we can already see it happening. People are waking up to the coffee smell and it’s all of us standing there to welcome them back to reality. It’s a feminist goal to implement their brand of education, knowledge, socialism, and justice in our minds, and eventually streets. We can’t let that happen, and if we veer off course and keep fighting each other, then we’re helping them more than hindering. Let’s stick together and kill this attempt at a coup. 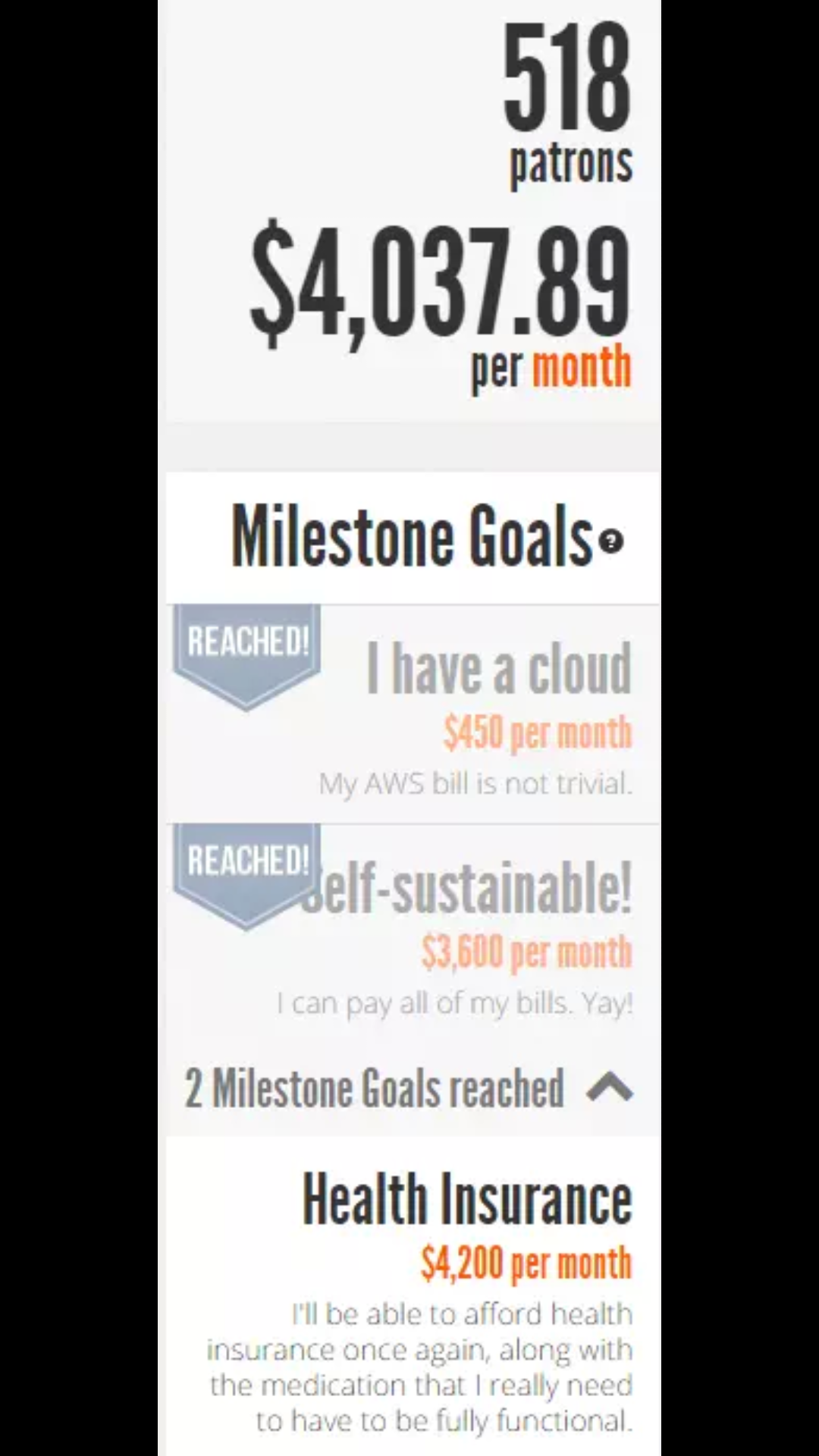 EDITOR’S NOTE: There’s been a lot of guest posting over the last day or so, but I’ll be back later tonight with a post or two from myself. Thank you for enjoying the subs, thought! Heh.