In August of 2014, I had never heard of Milo Yiannopoulos. How did I first hear about the man, you ask? Well, during the early part of GamerGate, I was introduced to Milo by way of him making an appearance on 4chan during the height of the action over there. We were all looking for a real advocate in the media, and so his arrival was basically treated like the Second Coming of Christ: 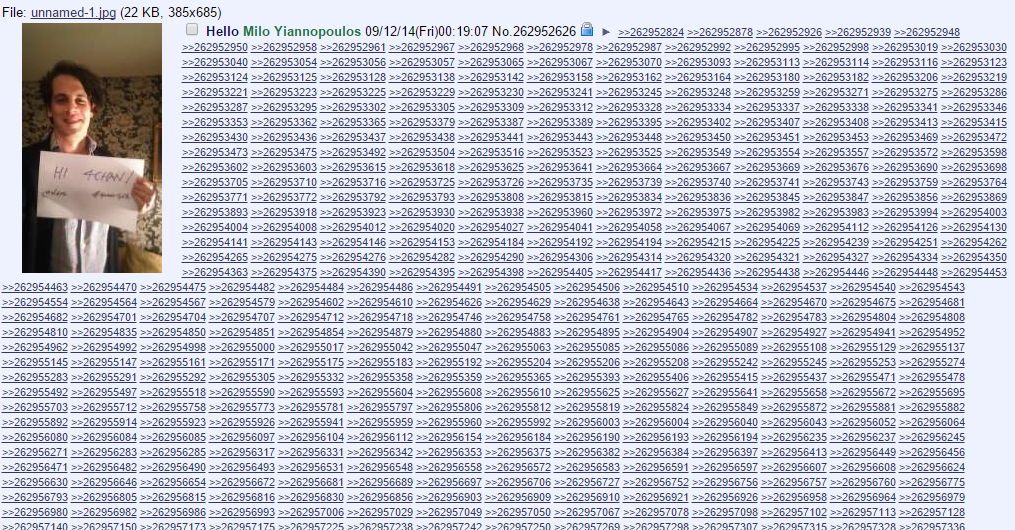 The guy was so cool that everyone loved him right off, me included. It wasn’t only his charm that won people over, though. Out of all our big names, he’s always been the most ferocious when it comes to defending our cause. Since he’s been battling SJWs for years, he already knew the deal when he came to our aide. He’s seen what they’ve done across the cultural spectrum and so he could read their assault on video gaming for what it was: an attempt to indoctrinate new recruits through the most interactive form of entertainment that we currently possess.

When I think back over all the hits Master Milo has had over the last 14 months, I find it hard to come up with a concise list. Nonetheless, I’m going to try to give you one here. Take a look at some excerpts from the last year:

After his temp ban was over…

His reaction to my Zoe court dox story…

What about the time he punked out Zoe’s puss rag, Nathan Grayson?

Who could forget the time he wrecked Shanley?

Kane is one of the most high-profile feminist activists in San Francisco. She publishes long pseudoacademic essays on her website, Model View Culture, which have been characterised by critics as “man-hating diatribes” and she uses a profanity-laced Twitter account to attack prominent figures in the tech industry, such as Netscape founder Marc Andreessen, journalists, start-up employees and even other women. Yet Auernheimer says Kane switched to feminism and social justice merely as an excuse to bully people, and that until very recently she was an outspoken racist…

The problem, critics may note when considering the charges of racism now facing Shanley Kane, is that they do not represent an embarrassing forum post from a decade ago, as is the case with so many manufactured scandals of the internet era. If Auernheimer is to be believed, they form part of a pattern of ugly, racist behaviour just a few short years ago. Which rather begs the question: why should anyone listen to her now?

His YouTube debut was also a sight to behold…

Or the time he challenged Anita the Fraud to a debate, which she of course refused…

In April, I challenged Feminist Frequency host Anita Sarkeesian to debate me some time around the E3 conference in Los Angeles this month. I offered a $10,000 donation to the charity of her choice. Well, E3 is looming and I’ve heard nothing. So what, dear reader, am I to do with all this cash? Obviously, my first thought was to donate to the Republican National Committee, or the NRA, or a men’s rights charity. Or perhaps AIPAC, in honour of her producer Jonathan McIntosh’s virulent hatred of Israel. But, as amusing as those options would be, I don’t think any of them truly captures the mischievous democratic spirit of #GamerGate. So I’m instead presenting six options for interested readers to vote on. What should I spend muh dollas on?

The Nyberg destruction is simply legendary…

In a shocking post on Nyberg’s own FFShrine forum, dated 26 October 2005, Nyberg, who used the screen name “Sarah,” describes herself as a “submissive male to female transsexual pedophile that’s fond of ageplay and penisgirls that really misses Alice (Nyberg’s 8-year-old cousin).” Elsewhere in the logs, she says “yes, I am a pedo. I embraced my childlover soul long ago.” Nyberg says she knows pedophiles: “I’ve probably known 8-12 pedo trannies,” she says...

Nyberg claims to have been the subject of some kind of investigation in the past. She says that her computer was seized in 2005. Nyberg expressed concern that they might find her encrypted drive, which contained what she described as “non-nude model” pictures.

She also admitted to hosting pictures of “ptms” (pre-teen models) on one of her websites. In her view, naked pictures of children “isn’t cp.” (CP is web slang for child pornography.)

There seem to have been other members of the FFShrine chat room Nyberg operated who had similar inclinations. One member, writing under the pseudonym “Ego” tells the group that he is “waiting on the little neighbour twins to develop.” In response, Nyberg requests pictures of them.

Big Randi will never be the same, either…

I didn’t eat anything but a little dietary aid I lovingly refer to as meth. Yes, that’s right. Meth. I put meth in St. Johns Wort pills and took them for a few weeks straight…

What does interest those who watch her relentless policing of others’ sexual mores and opinions is how dramatically she has reinvented herself from the slow-motion car crash seen in these blog entries to a supposed pillar of the online community without ever acknowledging her own sins.

It is pretty amazing, Milo. Only as an SJW could you pull off such a reinvention without any atoning whatsoever. There’s nothing wrong with having a colorful (even checkered) past. I have one myself. Although, I never tried to set myself up as the person who was gonna stamp out Internet abuse. I also don’t have a Patreon collecting thousands of dollars a month for doing nothing. There’s a lot of other differences between us as well.

For one, I never gave up my own child. But, knowing how Randi has turned out, I’d say that’s for the best. Here’s part of my exclusive follow-up:

After a somewhat turbulent childhood, I ran away to New York City, where I stayed with some friends I knew off UnderNet. I stayed there a week, but then had to go back home. It’s not easy to survive in the city with $12 in your pocket. I moved back in with my mother in Illinois, but the damage had already been done. I missed the city, so I left for New York once again. After three weeks I came back home, but only temporarily. I stayed in town long enough to drop out of high school, and then I moved to yet another small city, Ocala, FL.

After a month of living in Ocala, I got pretty bored and realized there were no IT jobs to be had. I left to live in Stillwater, OK to work for Creative Labs. I moved in with Duke, DigiEbola, and DataShark, but that only lasted a month or two before I met Datule on IRC. He also lived in Stillwater, and shortly after meeting him I moved in with him. After a month of living with him, we had sex, and I got pregnant. Stupid move, but such is life.

We were determined to make the best of it, so we started looking into adoption. I got fired from my job at Creative Labs after they found out I was pregnant, so life got pretty hard. Chad (Datule) was supporting me at this point and going to OSU full time. We ended up giving our daughter to friends of a friend, a very good family in upstate New York. We were both fairly fed up with Oklahoma at this time, as Creative Labs was the only IT job to be had in the area we lived in. Atlanta started looking like a good option.

And finally, here’s Milo chastising the rest of the conservative media for missing the boat on GamerGate (which most of the completely did)…

There’s so much that this man has been right about over the last year, that it’s truly staggering. Not only that, the motherfucker is just flat-out hilarious. Also, as I’ve pointed out on my show many times (it’s a running gag now), he’s an absolute pleasure to meet in person. The guy has it all, and I’m not just sucking up to him. He’s been an absolute joy to work with over the last year or so, and I can only hope that we have the chance to do more on that front in the future.

Check back later this morning for more, and share your favorite Milo Moments down below.