Sometimes this job is really fucking fun. Last night, someone tweeted some Alexa stats out. Generally, I montior these stats a little bit so I can get a gauge on how the site is doing. They fluxuate sometimes, and aren’t the be-all-end-all, but they’re usually a pretty good estimate of where you stand. My graph kind of looks like a snake, due to a couple spikes here and there. But I’ve been in the top 100,000 worldwide almost this whole time, and am strong in the U.S (also led the GamerGate websites these last 8 months).

In contrast, my old friend Leigh Alexander’s new site is in the shitter. She doesn’t even crack the top 300,000 worldwide. This is the woman who once said “I am games journalism.” Not anymore you’re not. Leigh Alexander is over. She’s sunk so low that she’s taken to pleading with people to help her pay off her debts on Twitter. It’s almost sad. Almost.

Here’s the tale of the tape: 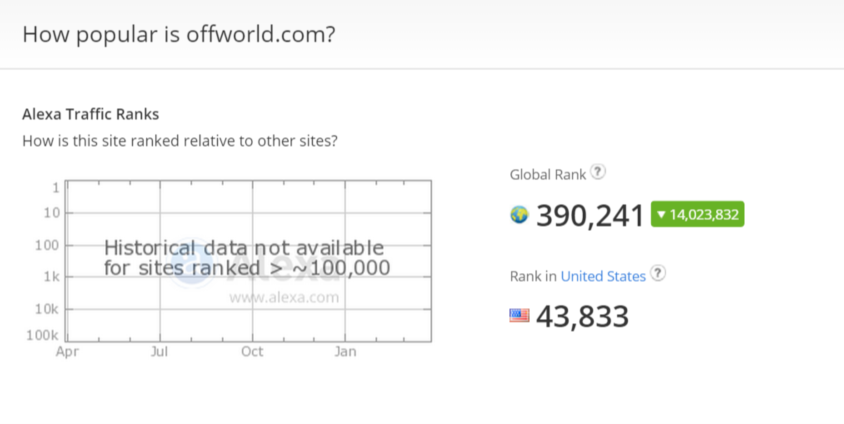 Leigh’s probably hoping that she can only go up from here. But she still has a long way to go before she catches me. I have no budget to speak of, and run the site on my own for a meager profit. She has hundreds of thousands of dollars behind her, a staff, and Boing Boing as well. Still, she gets rekt. You gotta love it. 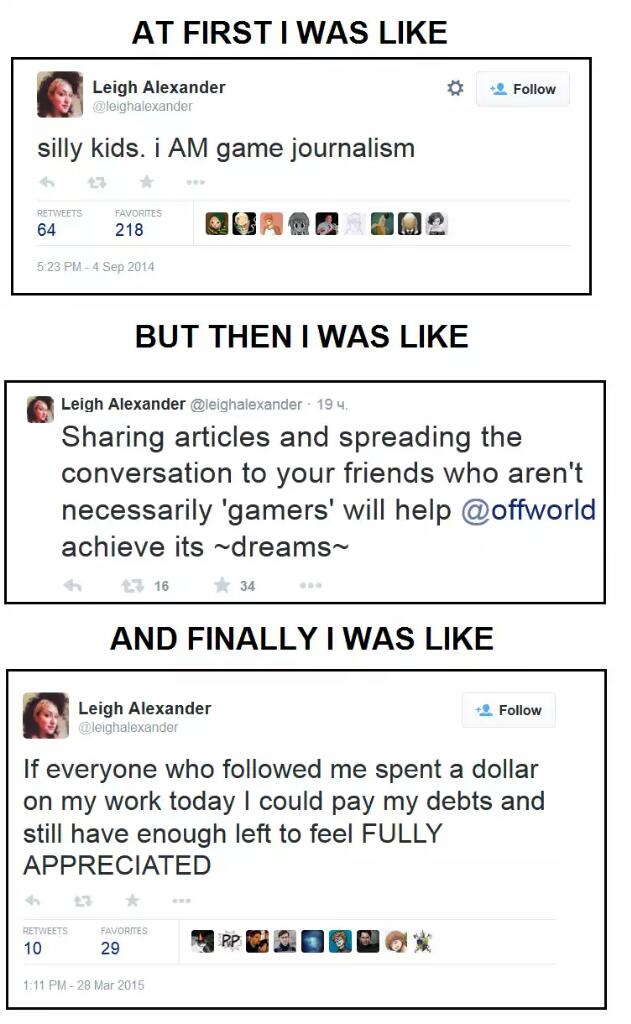 BUT, I didn’t come here to rag on the woman. OK, that’s not ALL I came here to do. I also wanted to share a little testimonial with you from one of Leigh’s former colleagues. I think it will explain her current predicament quite well. Give me your thoughts down below:

Quite awhile ago, I worked with Leigh and she was starting out in the industry. She was known for being the overtly sexual and ‘fun’ girl due to her aggressive nature. There were several parties where PR people would mutter that she was causing drama during public engagements and sometimes, would be told a party was ending or urged to another one simply to get her out of the doors. She, at the time, was in a small group of women who were considered to be ‘feminism grenades’ because you could not speak about anything without it becoming a gender debate. Even when drunk, she would edge almost anyone out of a conversation simply by pointing out that she was fighting for women. In the same breath, she would do shots and then gossip about other females that she felt were not progressive enough for her wildly trendy standpoints.

It was problematic, to say the least, because women were taking part in games journalism more and more and now there seemed to be sides of the fence drawn by herself, several women who were building sites and online outlets for women-exclusive video game coverage. The problem was that she made it look like being brash, inebriated and furious was going to make anyone any friends for the causes she supposedly had. If you disagreed with her, you were suddenly seen as an outcast. If you agreed with her, you were seen as one of her pets. Not just by others, but by herself as well.

Less than a year ago, I publicly spoke out against Leigh in a way that made her immediately defensive. I had been staying away from the feminism debate in video games because I never felt keen to it in the first place. Instead of noting that I was someone she very obviously knew of, she cried to her followers how she ‘wished’ that ‘young female writers’ wouldn’t try to ‘make a name for themselves’ by publicly calling her out. She cried over this until white knights poured out of the woodwork and she sent them my way before quickly blocking me and repeatedly telling people she didn’t know who I was.

There has never been a publication who has had to deal with her quitting so much as she was gently removed and asked to step down due to PR complications. A lot of my friends would come to me and let me know that it was being noted how people would leave the second they knew she was coming just to avoid drunken backlash. Her recent request for people to buy her online works to pay off her debt has been noted by some as a means to hold parties and gatherings and literally pay for better coverage of her name within the industry. There are a lot of rumors and coincidences behind Leigh’s behavior and truly the only reason I emailed was to let you know that she is seen as poison.

The only people that will hire her now are people who literally have nothing to lose.