Today, there was a shooting at a small Oregon community college. Details of the events are still flowing out, but before we get to the headline, let me familiarize you with the events. We’ll begin with The New York Times:

A 20-year-old man went on a shooting rampage at a community college in this rural part of southern Oregon, on Thursday, killing 10 and injuring at least seven, the county sheriff said, lowering the death count from earlier reports. The gunman died after an exchange of gunfire with the police.

NBC News will bring you up to speed with the rest:

At least 10 people were killed and seven others were injured when a gunman who demanded to know his victims’ religions opened fire Thursday morning on the campus of Umpqua Community College in southwest Oregon, witnesses and authorities said.

Oh, I also tweeted out this disturbing tidbit out from The New York Post:

Most people, when they see a tragedy like this, don’t think about going out to score points for whatever agenda they’re tying to push. Well, let me put it another way…people used to know that wasn’t what you were supposed to do. I can’t say this phenomenon is exclusive to the horrible woman I’m going to talk about in just a second. She calls herself Zoe Quinn, and I usually do too, since that’s what most people know her by. But, as many of you know, her real name is Chelsea Van Valkenburg.

I reject all calls by people like Zoe Quinn to censor the internet in response to the #UCCShooting. Using this to agenda push is disgusting.

You see, Chelsea used to be a (bad) nude model who allegedly sold cocaine. She even told another person that she killed a guy. To be frank, she’s a con-artist grifter whose lies are the stuff of legend. Now, you would think she’s the standard of moral virtue if you listed to the mainstream media. The outlets above failed to challenge this liar. Not one major “old guard” news organization stood up to the bully, or her thug partner, Randi Harper. Now, we’re left with the current state of affairs. This clown thinks she can come out the day of a national tragedy and try to tie an innocent group of gamers in with a mass murderer. By now, nothing shocks me anymore. But this proves beyond a shadow of a doubt that there’s no low Zoe won’t sink to. 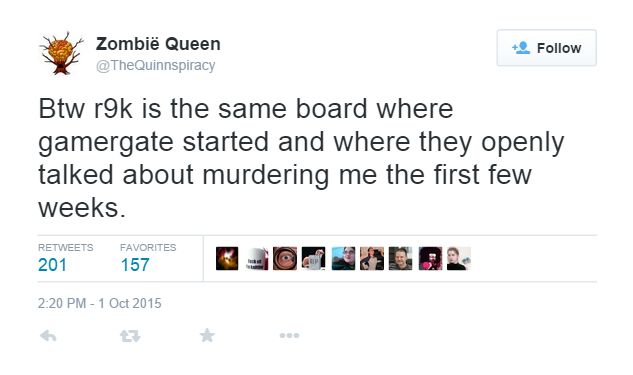 This is the same person who has harassed and bullied people throughout her public career, just like her partner in crime Hamburger Harper. Now she wants to lecture the rest of us on how to behave? Fuck that. It’s sick that we even have to point this out. In an ideal world, big media would be there to call Quinn on her shit. As you can tell, we don’t live in that ideal world. Political correctness has taken over and run us right into the ditch. Scumbag SJW spokeswomen like Chelsea show us just how bleak the situation truly is. I doubt we’re ever going to see anyone truly challenge her ever again at a mainstream place, now that she’s slinked off into the Anita Sarkeesian style, for the most part. Open debate is now considered too risky. A bad performance might hurt her paycheck. At the end of the day, that’s all this hideous witch cares about.