Lucian Wintrich broke a huge story earlier this evening concerning the troubling trio of low-paid hacks at Heat Street, a NewsCorp owned website which could best be described as a poor imitation of Breitbart. How did he break it, you ask? Well, all he had to do was sit through the shitty podcast said trio of hacks put out over on Soundcloud. That’s not small task, mind you. I couldn’t imagine listening to any of them for more than 90 seconds, tops. They sound like an incel convention on hormone replacement therapy.

What kind of topics were on the agenda? Well, calling Trump supporters “freaks,” for one.

Ian Miles Cheong and the lispy Joe Simonson also seem to be really obsessed with Milo Yiannopoulos, with the latter claiming that he’s a pedophile.

Little Hitler Cheong then tries to say that at least Milo doesn’t claim to be a conservative, which would be fine, except for the dozens upon dozens of examples where he does just that.

That shows you how plugged in the Mini Führer really is, but I digress. Lispy Joe also has some interesting words about his former employer, the (also) NewsCorp owned New York Post. Apparently, they’re obsessed with the n-word and use it in meetings all the time. Far be it from me to judge, but this does seem like an interesting corporate culture, to say the least. 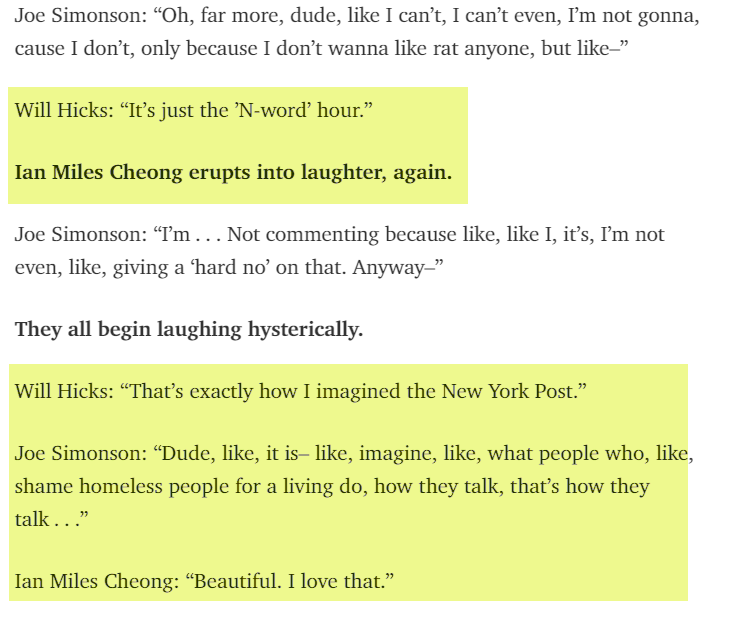 Ian Miles Cheong calls this “beautiful.” Well, that’s certainly one word for it. I wonder what some of their black employees might say, given the recent turmoil at Fox News over similar working conditions. I imagine lawyers are salivating at the prospect of targeting yet another Murdoch property.

Will Hicks closes out the festivities by musing on the cure for pedophilia. Apparently, it will be this…

As of press time, Ian Miles Cheong hasn’t responded to my request for comment. I didn’t bother reaching out to the other two, because after that last exchange, I think I need a shower.