HE LEVELED UP: SVU Star Ice-T Drops Bombs on the Media & Anti-Gamers

What is going on today? Something is definitely in the air on this, the one-year anniversary of GamerGate. You guys remember the Law & Order: SVU slime job from a few months ago, right? It’s pretty hard to forget it, since it was an over-the-top farce. Perhaps in honor of today’s celebration, MudaneMatt tweeted something at Ice-T, one of the stars of SVU. I retweeted it myself, as did others. That lead to T sending out this tweet:

Did you stand your ground on SVU’s #GamerGate ep? Or did you just read about it on kotaku? http://t.co/AXaYdPO6PA

Amazingly, this lead to Ice-T going on a a long ass rant in defense of video games. He also took delight in shitting all over the media. Basically, he leveled up, and pretty much backed GamerGate. I’m still buzzing from this shit. It’s so great to see a guy like T rip up the SJW narrative right in front of our faces.

Props to @FINALLEVEL. Didn't know #GamerGate in the past, but he's stepping up to the plate today. Fuck the media. pic.twitter.com/0GUMv3VXb3 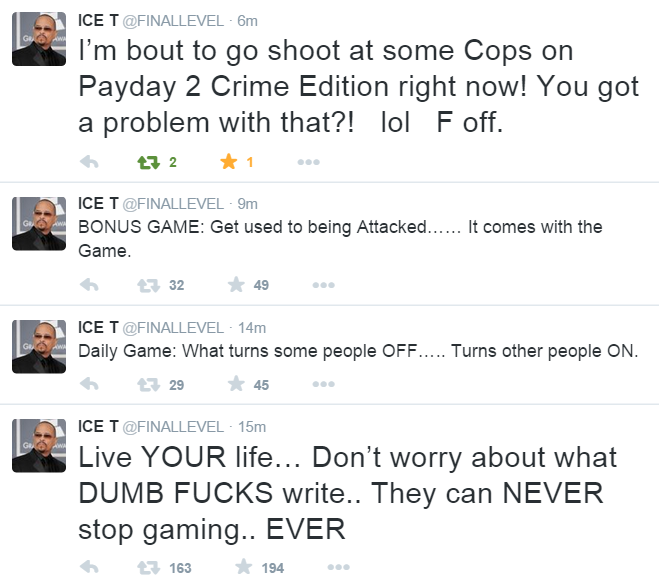 GAMERS: This is how I feel about my Video Games >>> Institutionalized https://t.co/o7e2aft0Z3

Eat A Dick…. What did that do to YOUR gamer cred.. Lol https://t.co/T7WwWdjCoD

Have a Great day! pic.twitter.com/UC0V9ykBnu

Things are still popping off on Twitter as we speak. This has turned an already jubilant day into an extraordinary one. The media has to cover this, one would think. I know they’ve ignored some happenings in the past, but with Ice-T’s celebrity, I would think the GamerGate related clicks would be irresistible. I guess we’ll have to wait and see, but either way, that won’t stop us from spreading it far and wide ourselves. I’m going to continue updating this post throughout the day with reaction from the GamerGate community, and more from Ice-T, if he says anything else. Also, I’m editing the Oliver Campbell interview as we speak, so be on the lookout for that.